Stream a little stream with me 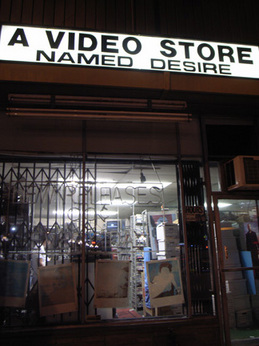 With the entry of Facebook into the field, an 800-pound gorilla has entered the room where we stream movies via the internet. If nothing else, this will introduce untold millions who have heard about live streaming but never tried it, in many cases because they assume it's somehow difficult.

Just about everyone seems to be on Facebook, but for some people getting a FB account seems to represent the limit of their online expertise. Now streaming will come to them, on their very own page, and all they'll have to do is give Mark Zuckerberg their credit card and buy some Facebook Credits.

I've had many good experiences watching streaming movies, but I watch them almost exclusively on my HDTV, using the Roku Player. Movies can also be streamed into televisions via X-Box, PlayStation 3, some Blu-ray machines and other devices. I get them from Netflix and Amazon. They look about as good as a DVD. I even stream movies via Roku to a screen on the wall in our Movie Room which uses an overhead projector and a big wall screen, and they look great there, too.

I've watched a couple of movies on my laptop, but even with halfway decent USB speakers the experience is anemic. Movies play fine on a nice desktop monitor with good speakers. I have never watched a movie on my iPhone, nor will I ever. I love movies too much to do something like that to one of them. A two-minute video on YouTube, sure.

In principle steaming a movie through Facebook makes as much sense as streaming it any other way, assuming the quality is about the same. I dipped my toe in the water at the Facebook page that Warner Bros. has established for "The Dark Knight," the first feature film to stream on FB. The price is $3 in Facebook Credits, and I'd have two days to watch it. I could see the names of 177 of my Facebook friends who have "liked" the page. Hi there, Drew McWeeny!

I'm not sure I want all of my friends to know which movies I "like." I might have a perfectly professional reason for wanting to watch "Transformers 2" a second time. I don't want to set off alarms about my sanity. Through Amazon I could stream "The Dark Knight" for $2.99 for three days, no questions asked. The Facebook rental is a penny more for a day less, and all my friends would know. At Netflix, "The Dark Knight" is not available for Instant Streaming, but they will mail me a DVD as part of my monthly fee.

Both Netflix and Amazon have plans which permit unlimited streaming of many movies which are not recent releases. My basic Netflix account costs $7.99 a month, for which I can also have one DVD a month mailed to me. Amazon has added instant video to a plan called Amazon Prime, which offers unlimited free two-day shipping on all eligible orders for an annual fee of $79. I already had this because it saved me money. Now it just got better. I have no plans to start buying or using Facebook Credits for movies or anything else. That seems too much like a bank issuing its own currency.

For a mainstream movie lover, the best choice is Netflix. It has an enormous inventory of titles, easily searchable by genre, director, country and other ways. Very usefully, it has software that observes your choices and makes recommendations. Having seen a great many films, I'm in a good position to judge how well their engine knows me. It knows me pretty damn well. It's currently recommending "Once," "The Lives of Others," "American History X," "Into the Wild," "Exit Through the Gift Shop," "Lars and the Real Girl," "The Fall," "Pan's Labyrinth," "Milk" and "Dogfight" and those are just on the top page before I even dig into a category. I've seen all of those movies, and every recommendation is right for me.

Amazon has a neat bell and/or whistle. Although many of its newer films are not available for immediate rental, if you buy them you can often stream them instantly. Both Amazon and Netflix have untold thousands of User Reviews, and Netflix also offers links to a great many mainstream reviews, such as (*cough*) mine. The Facebook model, as nearly as I can tell, will begin with a one-off approach, by which you go to a movie's FB page, spend FB Credits to rent it, and that's it.

Now allow me to grow slightly idealistic. I swim in movies. I find it voluptuous. I realize most people don't have the time I have. A movie is two hours out of your life. A good movie might enhance your life. There is the possibility a bad one might diminish you. Unless you have a very high caliber of Facebook friends, the right movies for you may not necessarily be "liked" by your crowd. If you're in high school and like good movies, you might betray yourself as a nerd. You may think twice about who you want to know you rented "Milk."

Facebook would seem, by its nature, to tilt toward blockbusters. "The Dark Knight" was a wise choice for Warner Bros. to begin with. But most movie lovers have probably (a) have seen it, or (b) have decided not to, and aren't about to spend $3 on it now. The test, I think, is whether a delivery system expands the universe of your choices. Does it push you a little. Inspire you?

When I want to see a movie, I check first to see if I can Instant Stream it on Netflix, and if not, stream it via Amazon for $2.99. There are other good online delivery platforms. Mubi.com calls itself an "online art theater," and specializes in indie, foreign, classic and festival films. Asia Pacific Films.com streams an enormous variety of films from the Pacific Rim that are not available anywhere else; for example, it currently lists 199 films from South Korea, whose film industry has been so fertile in the last 20 years. Fandor.com streams indie, offbeat and non-mainstream films, and has Facebook plans. Hulu.com matches Netflix at $7.99 a month, and has a ton of TV but seems weaker on films. It also arrives on your TV through Roku and game devices. All of these sites have active communities.

My concerns about Facebook are more instinctive than practical. The first has to do with security. Amazon and Netflix have known my credit card number for years. I've never had any trouble with either. Facebook has had several security breaches in which private information leaked, and its software in general fails to impress me. If there is a less intuitive mass-market site, I haven't found it. It's easier to use the Mac operating system right out of the box than to manage a Facebook account. Who but Facebook would think of inserting play money between you and your credit card?

I'm serious. I've been online since 1980. I know my way around the web. I edit my own blog. I joined Facebook and ran up against the 5,000-friend limit. So I started a Facebook "fan page" with no limit. But there was no way to switch my first 5,000 friends to the new page, and no way to divorce myself from it. Every time I try to "sign on with Facebook," the software uses my original account. I'm afraid to simply delete that old Page, because I fear that would somehow destroy my new one. I bought The Idiot's Guide to Facebook, and it didn't help with any of my problems.

Half of you know probably know the solution to my troubles. You will tell me the Idiot was the one reading the book. But I defy you to find me a single page of Facebook Help that would help me. And now Facebook is trying to foist a cluttered new page design on me. I don't mind ads down the right column; they have a right to make money. But why would I want the latest six photos from my Wall running across the top of my page? Why won't they let me opt out of their compulsory redesign? And what tortured reasoning went into the 5,000-friend limit that inspired my original complaint? Nobody has that many real friends anyway, so they're just being pissy. In for 5,000 friends, in for a million, I always say.

At this point, Zuckerberg and Co. haven't given me the confidence that they can protect my credit card or create Facebook streaming with the kind of choices, feedback and environment I have on Netflix and Amazon. Both of those sites are rather brilliantly programmed, I believe. They work the way it seems like they ought to work. And they are ecumenical; the recommendations on Netflix work equally well for an ancient movie critic and a teenage fan of cult horror films. In fact, the engine breaks Horror into 14 subgenres. For that matter, there's nothing better than an indie video store with clerks who have actually seen the movies they recommend.

There's a philosophical issue here. I'm in favor of choice. I can envision a future in which half of the web has been vacuumed up by Facebook. It's big enough already. Growth is not excellence. It's so enormous not because of programming genius but because of a mass compulsion to be part of the crowd. But since Zuckerberg or the twins had the great original stroke of insight, do you think the site has been particularly well-managed? If it's not making money, I'm in favor of monetizing it. Sell ads. But don't cannibalize sophisticated sites that do what they do perfectly well. And what kind of a streaming platform insists that you can only "Like" a movie?    Top photo by Shari Sakahara.