The two most important things that can happen to you in a mainstream movie are being killed and having an orgasm. Sometimes in facial close-ups it's hard to tell one from the other. When Pauline Kael saw that wall poster in Italy saying "Kiss Kiss Bang Bang," she sensed she was onto something.

I've recently seen two movies centering on orgasms. The most intense is Steve McQueen's "Shame" (2011), starring Michael Fassbender as a sex addict. I think I'll save my observations about that one for my review. Hardly less intense was Louis Malle's "Damage" (1992), about an affair between a man and his son's bride-to-be. It made an impression on me at the time, and I was scouting it for a possible Great Movie review. It reminded me how important orgasms can be in the cinema.

Most movie orgasms are perfunctory. Often we start with an action movie, introduce a woman, and then it becomes semi-obligatory for the hero to have sex with the woman. Routine examples of this can be found in the Bond films. His sex must be devoid of emotional significance, or 007's eyes would be deep, sunken pits after sleepless nights spent recalling the 30 or so women who have lost their lives after sleeping with him. Often a Bond movie will close with Bond and one of the women relaxing on an idyllic isle, but at the start of the next film these promising relationships have not survived. Possibly there's something sexually flawed about James. 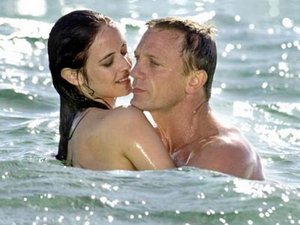 On the other hand, orgasm is very, very important in "Damage." It is almost all there is. Soon after the film opens, Dr. Stephen Fleming (Jeremy Irons) is at a social event with Anna Barton (Juliette Binoche). Their eyes lock across the room. Neither one breaks eye contact. Each holds the other's gaze for one interminable second after another, until so much time has passed that we, in the audience, realize we are holding our breath. There might have been a moment when they could have broken the spell, but they chose not to, continuing the moment far beyond the bounds of propriety or reason--particularly since Anna has just told Stephen that she is his son's fiancée. 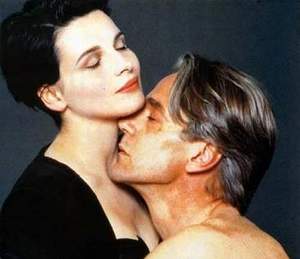 What happens in "Damage," based on a best-selling novel by Josephine Hart, is open to much interpretation, mostly about her motives. About Stephen there can be no doubt. He is in the grip of erotomania. He must have orgasms with this woman. They betray his son, his wife, his marriage. They endanger his position, as a high official who has been mentioned to become a cabinet minister. They have sex together suddenly, passionately, recklessly, outside all prudence and care.

There is perhaps an insight here into why we read so frequently about politicians, executives, clerics and others putting their lives at risk for a few minutes of sex. Their jobs depend on exercising power over others. Why would the football coach Jerry Sandusky endanger his entire life by seeking an orgasm with a 10-year-old boy in a public place? I don't believe exhibitionism begins to explain it. I believe at that moment the compulsion to experience an orgasm became overwhelming. He was driven to express it by exercising his power over the helplessness of his victims. Calling it "horsing around," as the coach does, is pitiful. It is rape and it is evil. "Damage" and Sandusky are not parallels, but both show men who are the instruments of their destructive drives.

An orgasm by itself after all is no very big deal. We can have one in a dream. Masturbation is common in all societies. In the recent obituaries for Cynthia Myers, the famous Playmate who died at 61, many bloggers spoke frankly about how she inspired their private pleasures. "The time was November 1968," wrote a blogger named Steve Sullivan, "The 13-year old kid in Fairfax, Virginia had nervously purchased his first Playboy with the August issue at the People's Drug Store just a few blocks away, and upon discovering the forbidden world of fantasy females he was hooked for life. The December issue--with its bulging girth and the stunning brunette serving as a human Christmas tree on the cover-looked especially promising. His fumbling fingers made their way to the centerfold."

Later he met her, liked her, had dinner with her, and was eventually to write a memorial article about her. I knew Cynthia Myers, a sweet and gentle woman (she starred in "Beyond the Valley of the Dolls"), and also, through working with Russ Meyer, I met many other famous pin-ups: Kitten Natividad, Tura Satana, Dolly Read, Uschi Digard. Once Russ and I went to meet Kitten at the Other Ball, a strip club in the Valley. After her act, she joined us and introduced us to a little old man who had been applauding her. "This is my Number One Fan," she said, not without both humor and pride. "He never misses a single performance. He drives to every club I appear in. He brought me flowers today." She put her hand behind his neck and pulled him toward her to kiss the top of his bald head, to the delight of his nose.

I've never felt that strongly. Oh, I've felt lust in my heart, as Jimmy Carter confessed, but never an uncontrollable need. The evil in a man like Jerry Sandusky is that he had no controls and no conscience. The way he described his actions in the TV interview was chilling in its pathology. In his very choice of words ("horsing around") he was providing a glimpse of how he rationalized acts that were in direct contradiction to what he and his "Second Mile" foundation stood for. In his mind, he probably isn't guilty. He displaced his crimes into denial.

Recently I've had been having a conversation with a friend of mine who mentioned the size of his socks in his blog. He received an email from a man offering him money for the socks. Deciding to satisfy his curiosity, he wrote back asking the man what it was about the socks that interested him. The man wrote back promptly and openly. He wanted to smell the socks, feel them, worship them. No doubt masturbation would have been involved. I don't understand this. The man understands it very well, and is willing to talk about it, because that's the way he is. 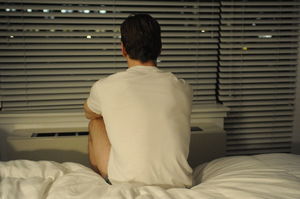 We are probably all hard-wired with our sexual desires. Most of them fall within the broad range of permitted human activities. Some do not, and those having them are very unfortunate indeed. From time to time a shoe fetishist will get into the news. There was a great film director, Luis Bunuel, who had that fetish for a lifetime, and often featured it in his films. As Catherine Deneuve is being dragged across a forest floor in "Belle de Jour" by a couple of coach drivers, Bunuel's tracking shot follows not her face, not her body, but her shoes. "That was a wonderful afternoon little Luis spent on the floor of his mother's closet," Pauline Kael wrote, "and he's been sharing it with us ever since."

All of this is by way of preface to my review of "Shame," which opens in Chicago on Dec. 2, and is one of those rare great films I would not be eager to see twice.    Postscript on 11/15 at 9:30 p.m.: In an earlier draft of this entry, I seemed to conflate the Sandusky matter and some of my observations about "Damage." That wasn't my intention. There is a difference between rape and compulsion. I drifted off-topic while discussing the movie. In an attempt to clarify my thinking, I've rewritten and added to the 7th paragraph.   This article from the Guardian links to a video animation of an MRI scan of a female brain during orgasm.