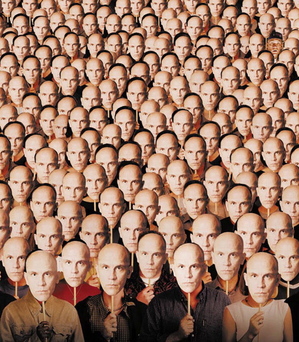 Fair warning: I begin with a parable, continue with vast generalizations, finally get around to an argument with Entertainment Weekly, and move on to Greek gods, "I Love Lucy" and a house on fire.

The parable, The lodestars of John Doe's life are his wife, his children, his boss, his mistress, and his pastor. There are more, but these will do. He expects his wife to be grateful for his loyalty. His children to accept him as a mentor. His boss to value him as a worker. His mistress to praise him as a sex machine. His pastor to note his devotion. These are the roles he has assigned them, and for the most part they play them.

In their own lives, his wife feels he has been over-rewarded for his loyalty, since she has done all the heavy lifting. His children don't understand why there are so many stupid rules. His boss considers John Doe as downsizable, and fears he may also get the axe. His mistress asks herself why she doesn't dump this creep and find an availableman. His pastor has a pretty good idea what goes on during the other six days of the week.

This dynamic radiates out into every other life on earth and down through time, shading gradually into other religious or irreligious value systems. Every other life relates to those encounters in the same way, depending on local conditions. Life's a stage, and we bit players upon it. Charlie Kaufman's "Synecdoche, New York" is a film that boldly tries to illustrate this universal process by using a director immersed in a production of indefinite duration on a stage representing his mind. 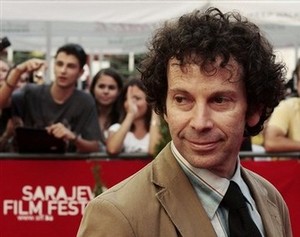 O, Sarajevo, my Sarajevo! Charlie Kaufman at the film festival

The film is confused, contradictory and unclear, so I am informed by those unmoved by it. Owen Gleiberman of Entertainment Weekly grades it "D plus" and has what I agree is a reasonable reaction to this film: "An artist makes a movie that is so labyrinthine and obscure, such a road map of blind alleys, such a turgid challenge to sit through that it sends most people skulking out of the theater -- except, that is, for a cadre of eggheads who hail the work as a visionary achievement."

I imagine he speaks for a majority opinion on this film. I am resigned to belonging to a cadre of eggheads hailing "Synecdoche," although I have praised many a film, like "The Golden Compass," that Gleiberman dismissed as not Great Trash but the compacted variety. Naya, naya, naya! Who's the egghead now? But Owen is a terrific chap and we like each other, especially when we find ourselves enlisted in the same cadre.

He cites "Last Year at Marienbad" (1961) as another example of obscure obfuscation. How clearly I remember seeing that film in the early 1960s at the University of Illinois. My reaction was precisely the same as the one I felt after seeing "Synecdoche." I watched it the first time and sensed it might be a great film, and that I had not mastered it." We all met with Gunther Marx, a professor of German. We sat over coffee in the Illini Union, late on that rainy night in Urbana. "I will explain it all for you," he said. "It is a working out of the anthropological archetypes of Claude Levi-Strauss. We have the lover, the loved one, and the authority figure. The movie proposes that the lovers had an affair, that they didn't, that they met before, that they didn't, that the authority figure knew it, that he didn't, that he killed her, that he didn't. Any questions?'' 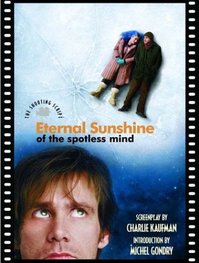 The sunshine's blight on my old unlucky mind

We gaped at him in awe. I was instructed long ago by a wise editor, "If you understand something you can explain it so that almost anyone can understand it. If you don't, you won't be able to understand your own explanation." That is why 90% of academic film theory is bullshit. Jargon is the last refuge of the scoundrel. Yes. But if a work seems baffling yet remains intriguing, there may be a simple key to its mysteries. I doubt that James Joyce's Ulysses had a big opening weekend. You start it and start it and start it, and you shore up in uncertainty and dismay. Then someone tells you, "It's an attempt to record one day in the life of some people in Dublin, mostly focusing on Leopold Bloom. It uses or parodies many literary styles and introduces a new one, the stream of consciousness, which defines itself. Try finding somebody Irish to read the tricky bits aloud." Voila! And now we celebrate Bloomsday, June 16.

For thousands of years, fiction made no room for characters who changed. Men felt the need for an explanation of their baffling existence, created gods, and projected onto them the solutions for their enigmas. These gods of course had to be immutable, for they stood above the foibles of men. Zeus was Zeus and Apollo was Apollo and that was that. We envisioned them on mountaintops, where they were were little given to introspection. We took the situation as given, did our best, created arts that were always abstractions in the sense that they existed outside ourselves. Harold Bloom believes Shakespeare introduced the human personality into fiction. When Richard III looked in the mirror and asked himself what role he should play, and Hamlet asked the fundamental question To be, or not to be,the first shoe was dropped, and "Synecdoche" and many other works have dropped the second shoe.

Sometimes the most unlikely-seeming films will slot right into this groove of projection, strategy and coping, as they involve the achievement of our needs and desires. You could put Harold Ramis' "Groundhog Day" (1993) on the same double bill with "Synecdoche." Bill Murray plays a weatherman caught in a time loop. As I wrote at the time: "He is the only one who can remember what happened yesterday. That gives him a certain advantage. He can, for example, find out what a woman is looking for in a man, and then the 'next' day he can behave in exactly the right way to impress her."

Not science fiction. How the world works. On "I Love Lucy," even ditzy Lucy understood this process. I will act as if I am the kind of woman Cary Grant would desire. We all live through "Groundhog Day," but it is less confusing for us because one day follows another. Or seems to. 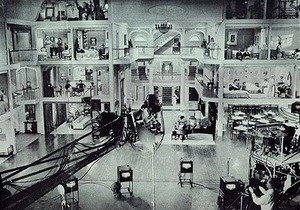 My first time through "Synecdoche" I felt a certain frustration. The plot would not stay still. It kept running off and barking at cats. The second time was more soothing. I knew what was going on. It is what goes on every day of our lives, made visual by the inspired set design, rooms on top of rooms, all containing separate activities, with the protagonist trying to satisfy, or direct, or obey or evade, or learn from, or receive solace from, the people in all of the rooms.

Jerry Lewis' "The Ladies' Man" (1961) does the same thing, with a famous set that must have been an inspiration for "Synecdoche." Maybe that's another film I need to see again. Those French, what philosophers. Jerry Lewis, shake hands with Alain Robbe-Grillet. The French are correct that Jerry is funnier.

It occurs to me that many movies tell the stories of pre-Shakespearian gods. The hero is introduced, remains constant throughout the movie, behaves as he can and must, and wins at the end. That is comforting for us, and one reason we go to the movies. Imagine that "The Dark Knight" was exactly similar, frame by frame, from beginning to end, but has a brief extra scene at the end where Batman slips on a wet floor in the Batcave, hits his head on the floor, and is killed. Then the camera slowly pulls back to show the dead caped crusader in the gathering gloom and then up in an invisible wipe to the Moon over Gotham City. What's your best guess? Final gross over a billion? 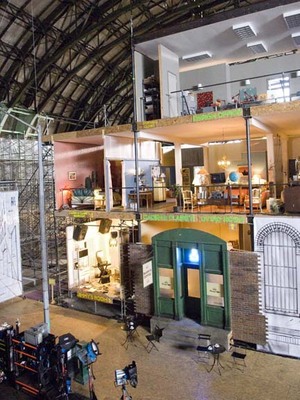 Yes, Owen, I think "Synecdoche, N.Y." is a masterpiece. But here I've written all this additional wordage about it, and I still haven't reviewed it. How could I? You've seen it. How could I, in less time than it takes to see the movie, summarize the plot? I must say that in your finite EW space, you do a heroic job of describing what happens. But what happens is not the whole point. The movie is about how and why the stuff that happens--happens. Might as well try to describe the plot of Ulysses in 800 words or less. All you can do is try to find a key. Just in writing that, I think I have in a blinding flash solved the impenetrable mystery of Joyce's next novel, Finnegans Wake. It is the stream of conscious of a man trying to write Ulysses and always running off to chase cats.

Comparable to great fiction? Yes, with the same complexity and slow penetrability. Not complex as a strategy or a shortcoming. Complex because it interweaves and cross-refers, and every moment of apparent perplexity leads back somewhere in the movie to its solution. Some great fiction, like Ulysses or The Sound and the Fury or The Golden Bowl, was hypertext when hypertext wasn't a name, but only a need. Henry James seems the steadiest of hands, but underneath, his opening chapters are straining to touch the closing ones, and the middle hides concealed loyalties. And when he writes "intercourse," you never quite know what he means. Very hypertextual.

Why is the house always on fire, but nobody seems to notice it? Don't unhappy homes always seem like that? Aren't people always trying to ignore it?

The voice-over. Maybe the only time I've heard coughing in a voice-over.

That matte painting. Right. It moves.

What does the title mean? In my review, I wrote: "It means it's the title. Get over it." Not so fast there, Mickey Spillane. As I should have positively known in a Charlie Kaufman screenplay, it is a word that has a meaning. Wikipedia informs me:

In other words, the playwright's life refers to all lives, and all lives refer to his life. So Kaufman gives the whole thing away right there in his title. Talk about your spoilers.