‘Life Itself’ is Being Shown at the Historic Virginia Theatre

"Life Itself," the acclaimed documentary directed by Steve James ("Hoop Dreams," "The Interrupters"), returns to The Virginia Theatre, 203 W. Park Ave., in Champaign-Urbana, Illinois, from Monday, July 28th, through Friday, August 1st. The film opened Ebertfest (The Roger Ebert Overlooked Film Festival) at the venue this past April after premiering at Sundance (click here to read Nell Minow's report on the film's memorable Ebertfest screening). Apart from being nestled in the town of Ebert's alma mater, the theatre has served as the location of the legendary critic's annual film festival, welcoming filmmakers and cinephiles from around the world.

The Virginia Theater has undergone an extensive restoration by the Champaign Park District. Roger and Chaz Ebert through Ebertfest also played a role in championing the preservation of the historic venue, which hosts everything from live performances (comedian Mike Birbiglia will be there in September) to classic film screenings (Hitchcock masterworks such as "North by Northwest" and "Rear Window" will play there in October). In 2011, Ebert wrote, “The preservation of theaters like this is invaluable; such buildings will never again be constructed, and most of our filmmakers will never have seen their films with such a large audience. In all the moments of Ebertfest, surely one of the most magical was when we showed ‘Singin’ in the Rain’ and Donald O’Connor walked onstage and said, ‘You know, I danced on this stage in vaudeville.’ Here, too, did the Marx Brothers perform, and Houdini demonstrated his amazing escapes.”

"Life Itself" screens at 7pm every day during its week-long run. Tickets can be purchased on the Virginia's official site. Rick Harney's statue of Ebert, which was unveiled at this year's Ebertfest, is permanently fixed at the site. Thus, this week provides fans with the perfect time and place for fans to give the critic (and his film) thumbs up. 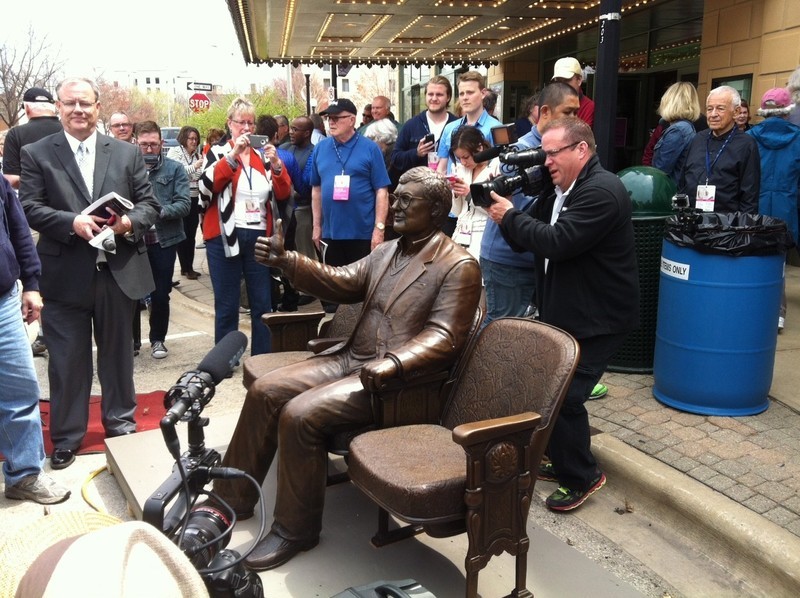