In the sweet bye-and-bye 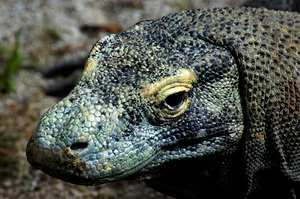 One is the loneliest number that you'll ever do. Or maybe it isn't. Maybe Zero is lonelier, because it doesn't even have itself for company. On the other hand, maybe Zero isn't really a number. Even if it is, let's not go there. Too deep for me. Let's start out easy, with One. Everybody on board? Good. If one is lonely, what is the cure? Two, obviously, even if Two the loneliest number since the number one.

Most solo reproducers are severely lacking in charisma. Consider parasitic wasps. Think they give a damn about popularity? Recently, however, scientists were astonished to discover that Komodo dragons [above] occasionally reproduce single-handedly. That didn't surprise me. Those bastards are always up to something. All right then, two to tango. Always two. Never three, except in that novel by Isaac Asimov.

Two is a useful number for taking advantage of mixing mutations in the genetic code, and passing them along in the evolution of species. With three, the DNA would be scratching its head: Choices! Choices! Oy, vey! In passing along our genes, we are naturally programmed to seek others of our species, and we like a nice selection. Even if we don't have sex on the mind, it's comforting to have someone like us just around. I spend a lot of time looking at ducks. Ducks spend a lot of time looking at each other. They're thinking, A-ha! Another duck! 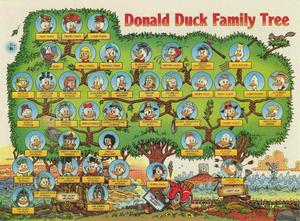 So two creatures give birth to a new creature. And the new creature finds another new creature, and then it's barbershop mirrors. This is where the math becomes theological. A great many people are comforted by the belief that when we die, we will be reunited with our loved ones at the gates of heaven. This is an incredibly selfish notion. What about their loved ones? Would you want to condemn Pop and Mom to spend eternity without their own Moms and Pops? And what about their grandparents, and all of everybody's brothers and sisters, and their kids? Get far enough along on the family tree, and somebody's eventually gonna tell you: "Sorry, I don't have time to be reunited right now."

I won't even get into the issue of being reunited with very close friends, or pets, or people you love even though you haven't ever met them, like Garrison Keillor. Let's keep it in the family. Obviously, you're going to have to cut your parents some slack, so they can have a little quality time with their parents. It could even be pleasant. Maybe you've met your grandparents, and you already love them. The parents of your grandparents, not so much. What will you have in common, apart from relatives?

I hope not. I'd rather be like I was I was before I got all these health problems, but still knowing what I know now. I'm relieved we don't have a history of Alzheimer's on either side of the family, although when he was well over 90, my Uncle Bill once mistook me for his brother Everett. It may have been a case of bad eyesight. Whatever happens, I hope heaven isn't filled with people just like they were a nanosecond before their deaths--Alzheimer's victims, mutilated targets of accidents and wars, tragically dead children, plague and drought victims, teenagers with syringes in their hands, and people with nooses around their necks.

So let's lighten up. Let's assume the reuniting will involve everyone in an ideal condition. All of our loved ones, let's say, will appear as how they would prefer to be remembered. That's only fair to them, even if it turns out that our parents are lovey-dovey teenagers head-over-heels in first romance, and haven't yet had us, or been pounded down by the ordeal of raising us. And of course we get the same right, which means we don't have to deal with our children as they're putting us through their puberty. 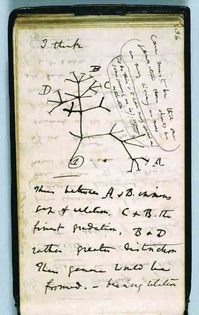 Beginnings of a theory of descent in a notebook of Charles Darwin.

I just realized there's a theological error in my reasoning. Forget about bodies. Theory has it that our souls will be reunited. That means that our appearance in the hereafter will occur at the moment of our death. You don't get to choose which form you take. On the other hand, no more worries about wardrobe or fitness. In Catholic school we learned that you'd better hope you're in a state of grace at that moment. Otherwise, you and some of your loved ones may find yourselves reunited in the other place. Or, you get to heaven safely, but some loved ones are missing. Mom's there, but Dad got hammered at the lodge meeting on stag night, and ran his car into a telephone pole.

Anyway. Let's assume just about everybody is there, and they're all happy. It will be a wonderful reunion. We shall meet on that beautiful shore. It will be a crowd. Let's start right out with Adam and Eve. To estimate the population, we're going to need more than fingers and toes.

Because DNA works according to thoroughly understood digital principles, I'm pretty sure there has not been time for even 4,294,967,296 generations in the history of the earth, and in our calculations we surely have leaped back far beyond all the complex organisms and even our beloved ancestors the single-celled specks, who might not even care about their offspring, although, having but one cell, they can be forgiven for their heartlessness.

Let's admit it. We're all honorary members of the Me Generation and we have to be selfish here. We're good enough, smart enough, and darn it, people like us. Let's limit this to humans. Let's cut out the chimpanzees and all our other cousins. They're always showing up when they hear about a party, and blocking the driveway. 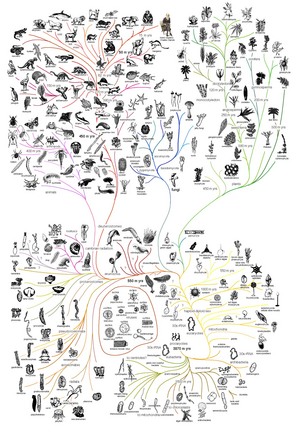 Because of the inexorable and inarguable logic of the binary code, we can say with some confidence that all of us, every single one of us, is descended from a female who lived about 140,000 years ago in Africa. Scientists call this very early human Mitochondrial Eve. If she hadn't given birth to a child out of wedlock, where would we all be? There was an Adam, of course, but scientists believe his line met Eve's 85,000 years later. His name is Y-chromosomal Adam. Urgent to Adam: If an erection lasts more than 40,000 years, call your doctor.

Now be honest. In your mind, when you thought of the sweet hereafter, you formed an image of the generations spreading out from you all the way back to the beginning. You know I'm right. You're thinking of it right now. Alas, they don't spread that way. It's not all about you. Develop a little humility. It works the other way around.

What you're doing, you egomaniac, is picturing an upside-down family tree with you as the trunk. Open those front pages of the family bible and see what I mean. You don't even really need a bible for this. All families are the same. You came from two people. They came from four people. The fact is, you are not the trunk. You are a leaf at the end of a branch that is very, very high. And then you work your way down and down and down, and finally arrive at the acorn in the dark backward and abysm of time.

Sadly, Eve doesn't get to be reunited with all of her ancestors. We have to draw the line somewhere. She has her work cut out for her, just dealing with her descendants. It'll be quite a crowd. Which leads us to today's final question. What kind of parents would name their kids Mitochondrial and Y-chromosomal?

"Duck Family Tree" by Donald Duck artist Don Rosa at a site gathering all the attempts to chart Donald's genealogy.

Darwin's Evolutionary Tree of Life, where you can also view Dion Wright's breathtaking "The Mandala of Evolution."