I totally see lots of ghosts 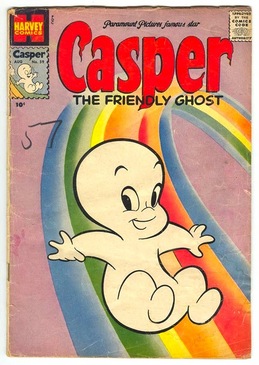 There is no such thing as a ghost. And even if there was, would they have enough physical presence to show up in a photograph?

I say this with full knowledge that 245,000 images are linked by Googling "photographs of ghosts," and that Sir Arthur Conan Doyle, creator of the pragmatist Sherlock Holmes but a fall guy for spiritualists, endorsed the reality of the famous Cottingley Fairy Photographs, a hoax which inspired the 1995 movie "Fairy Tale: A True Story").

Perhaps you believe in ghosts, fairies, elves, leprechauns, hobbits and other mythical or mystical creatures. This is your privilege. That's not the question here. The question is, was there a ghost in a photograph of a deer I recently took in the woods in Michigan?

The possibility never occurred to me. In fact, I didn't find the photograph itself worthy of a Tweet. I'm not exactly like,

look, dudes! I shot a picture of a deer in the woods! It would have to be a good photo of a great deer, or vice versa. I had this photo, and its ghosts, forced upon me.

In Michigan writing my memoirs, I was tooling down a narrow wooded lane in my new Ford when Millie Salmon, my minder, said, "Look! Those are the deer that are eating your flowers!" Indeed, a day earlier I'd tweeted a haiku on the subject:

To eat my impatiens.

I stopped the car and backed up of slowly. Yes, there were four deer on a forest ridge not far from the road. One was a stag, one was a doe and two were fawns, but I wouldn't call it a family group because as far as I know deer don't form nuclear families. These were probably some of the same deer we'd seen the previous day, which inspired me to sprinkle cayenne pepper around my impatiens. It's an Old Farmer's Almanac folk remedy. 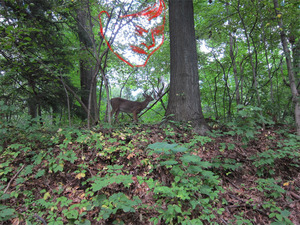 I took some photos. The best was of the stag, and I e-mailed that one to my wife Chaz and my stepdaughter Sonia. They know these woods. Sonia wrote back: "Did you guys see the ghost above the deer?" Chaz wrote back: "I've looked and I've looked at the photo, and I don't see any ghost. Where is it?"

Sonia tried to explain, but of course when it comes to ghosts in a forest words are inadequate. I was hooked. I made a page on my blog and titled it, All I see is a deer, trees and a lot of leaves. I tweeted this page, and was astonished to get almost 20,000 hits. I once tweeted a body mass x-ray of myself and didn't do nearly as well. 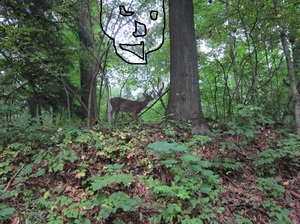 Comments poured in. You can read them at the link above. I read, "I haven't seen this much discussion over an image since the Zapruder film!" and "I am seeing a fine crop of poison ivy" and "You need to have the soul of a sculptor or artist to envision the sunlight pouring through the leaves in that manner" and "I do see what appears to be a giant, dead grasshopper falling from the tree behind the deers head."

On the other hand, I got a lot of comments along these lines: "I do see a face, though I wouldn't necessarily say it's ghost-like. Her chin is very pointed and starts about 2/3 the way up the picture over the center of the deer. Her cheeks are big, lips full, there are eyes and the head is turned slightly to the right. The picture ends just above the eyebrows and the forehead is cut off. I think she has bangs. When I zoom in though, I can't see it. Distance makes it easier to see - like so many things." 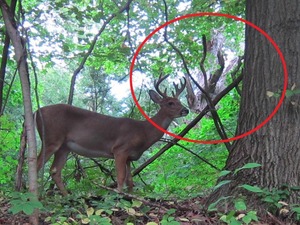 Many readers posted links to their own annotated photographs, circling or drawing in the ghost. And then, yes, I could sort of see it. In fact, I could sort of see them all. It was revealed that the photograph was crowded with ghosts, apparently drawn to that forest path (as ghost theory suggests) because they had unfinished business there. I've posted the best of these annotations on this page, and they're all linked in the comments on the earlier page.

Other readers suggested that this whole experience was a demonstration of a well-known psychological phenomenon, in which when one person sees something ("Look at the image of Jesus on my burnt toast!") others see it too, and conclude that the divinity has chosen to bless the General Electric toaster of Mrs. Tootsie Stubbs of Lesser Piltdown, Pa. Several times a week I drive through an underpass on Fullerton Avenue in Chicago, where candles and flowers are placed to this very day at a place where a water stain was determined some years ago to be the image of the virgin. 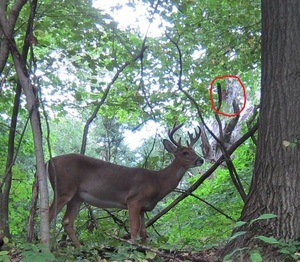 A fascination with ghosts is understandable. Deep within me lives the child who believed in ghosts and refused to go down to the basement alone. I have a love of Victorian and Edwardian fiction, which was big on ghosts. I savor the stories of Oliver Onions, and of course The Turn of the Screw by Henry James, the best of all ghost stories. I'm endlessly asked about the ghosts allegedly to be seen in "The Wizard of Oz" and "Three Men and a Baby."

Most of my readers, I'm convinced, didn't really think they were seeing a ghost at all. This includes Sonia. They were seeing an optical illusion. And once they saw it, they could never again not see it. Now peer at the picture, and drive yourself bonkers.