My negative review of "The Raid: Redemption" violated one of my oldest principles, and put me way out of step with other critics. In my review I gave it one star. The movie currently stands at 8.4 on IMDb, 83% on the Tomatometer, 76 on MRQE, 73 on Metacritic, and 65.4 on Movie Review Intelligence. When my review appeared online at 12:01 a.m. Thursday morning, "The Raid" was hovering near 100% at Tomatoes. You need a 60 to be a "fresh" tomato.

These numbers of course are not drawn from the same pool of viewers. IMDb and RT are weighted toward a wide selection of mainstream reviewers. MRQE and Meta monitor more serious critics. MRI does an interesting thing; it surveys local and national markets and tries to estimate the actual box office effect reviews have had.

These numbers in themselves have no significance compared to the words in the reviews they reflect. But they tell me my review violated one of my oldest reviewing guidelines. When I began, I found the star rating system to be absurd. I still do. But I thought I'd found a way to work with it. I'd take a "generic approach." Instead of pretending a star rating reflected some kind of absolute truth, I'd give stars based on how well I thought a movie worked within its genre and for its intended audience. A four-star rating might indicate the movie transcended generic boundaries. For example, what genre does "The Tree of Life" or "Synecdoche, NY" belong to? 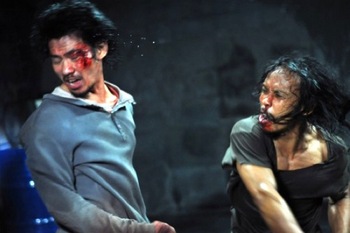 Most accounts agree "The Raid" is a superb martial arts film. Because it wasn't filmed in English, it found itself opening mostly in art or specialized theaters, where it did big numbers. In English, it might have done even better, because it truly is full-bore wall-to-wall action. I suspect its first audiences knew exactly what they were in for, and found exactly what they wanted. The trade paper reviewers, whose job is to advise exhibitors what kinds of audiences a film is likely to draw, were ecstatic. It was "hard-driving, butt-kicking, pulse-pounding, bone-crunching, skull-smashing, blood-curdling" (Hollywood Reporter) and "a hand-to-hand, fist-to-face, foot-to-groin battle, with a few machetes and guns tossed in for good measure" (Variety). "Extraordinary stunt and fight work and nonstop excitement, but a warning...this may be the most violent movie I've ever seen." (Peter Rainer, Christian Science Monitor). "A slam-bang, knock-your-socks-off action bonanza with some of the most peerlessly shot, performed and choreographed fight sequences you're likely to see on screen." (Gary Goldstein, Los Angeles Times). These reviews are accurate. I agree with them. According to my generic approach, I should have written a favorable review. Why didn't I?

Here's a paragraph from my review: "'The Raid: Redemption' is essentially a visualized video game that spares the audience the inconvenience of playing it. There are two teams, the police SWAT team and the gangsters. The gangsters have their headquarters on the top floor of a 15-story building, where they can spy on every room and corridor with video surveillance. The SWAT team enters on the ground floor. Its assignment: Fight its way to the top, floor by floor." 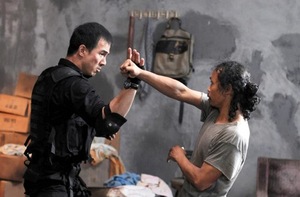 This will be dismissed by some readers as a manifestation of my lack of enthusiasm for video games. Perhaps so. I think it springs more from my affection for characters, plot, human nature and other elements possible in movies. "The Raid" is monotonously single-tracked in showing one gruesome scene of hand-to-hand combat after another. Heads are destroyed like targets in a carnival sideshow booth. Bones are crunched as if Army Rangers are building a campfire. The corpses piling up in great numbers are disposed of, apparently, by invisible clean-up crews. Why are there no shots of the living stepping with difficulty over the bleeding mounds of the dead?

A plot? "The Raid" supplies only Plot Markers, which are handy signposts indicating "There would be a subplot here if we had the time to stop for one." One Marker says, "Brother." Another says, "Betrayal." The movie's first one says, "Pregnant Wife."

Fans of this genre are long accustomed to two brothers finding themselves on opposite sides of a conflict, and eventually forced to meet each other in a brutal standoff. Good movies have been developed around this theme; consider Mark Wahlberg and Christian Bale in "The Fighter" (2010). In "The Raid," we're being signalled, "We could take the time to plug in a back story here, but why bore people?"

In a movie involving a conflict between the police and criminal forces, we expect that one or more turncoats will be involved, a high level operative will be working for the enemy, and so on. "The Raid" has characters indicating they have such a function, but doesn't go into much detail. 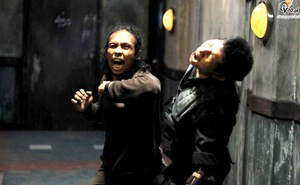 The Pregnant Wife is always effective. If the hero kisses his pregnant wife goodbye before setting out on his mission, that's an efficient substitute for 15 pages of dialogue setting up the character. He's good, we like him, and let the killing begin. In some movies, the plot will find a way to hold the pregnant wife hostage, but do you have any idea how much time that can take?

So what am I saying? "The Raid: Redemption" failed as a generic success because it simplified its plot too much? Not really. It is a generic success. And yet my heart sank and I asked myself: Is this all they want? Are audiences satisfied with ceaseless violence, just so long as they can praise it for being "well choreographed?" Is there no appreciation for human dimension, meaning, and morality? Westerns were the first Hollywood morality plays, and it was always clear who was good and who was bad. Now it doesn't matter so much, and the cops and robbers in "The Raid" agree with Red Sanders: "Winning isn't everything; it's the only thing." 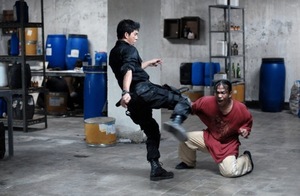 Another quote from my review: "There's obviously an audience for the film, probably a large one. They are content, even eager, to sit in a theater and watch one action figure after another pound and blast one another to death. Have you noticed how cats and dogs will look at a TV screen on which there are things jumping around? It is to that level of the brain's reptilian complex that the film appeals."

I can't take this much longer. I can't function like a butcher's scale. Is it enough to spend two hours determining if a film "achieves its generic purpose?" Shouldn't it do more than that? Perhaps provide some humor, humanity, romance, suspense, beauty, strategy, poetry. Not all of those qualities, but at least several of them. "The Raid" didn't even supply a single good-looking publicity still.

I've seen some incredibly brutal South Korean films recently, like "The Chaser," that contain enough violence to stun any fan of "The Raid" but also have the advantage of being very good films, with intriguing characters, puzzling plots, and ingenious situations. I watched spellbound. "The Raid: Redemption" is dead in the water. The butcher slams the raw slab on his scale and asks, "How many are you feeding?"

These thoughts, some readers inform me, are a function of my age. I'm too old to appreciate a movie like this any longer. That may be true. It doesn't mean I lack the ability. It means I have grown beyond that stage. I am not as easily satisfied. When I began as a film critic, the word "genre" suggested a type of film that had highly developed traditions, possibilities and richness. Now it suggests a marketing decision. 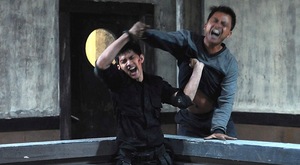 These days, audiences enter a film like this with tunnel vision. They know what they want, and they'd better find it. A film surpasses the requirements of its genre only at hazard. One of the best recent crime films, "Drive," was close to a masterpiece. Sarah Deming, a Michigan women, filed a lawsuit against its distributors claiming its trailer was misleading. Entertainment Weekly summarized her complaints:

• "Drive" was promoted as very similar to "Fast and Furious," when in actuality, it wasn't.

• "Drive" bore very little similarity to a chase, or race action film, for reasons including but not limited to "Drive" having very little driving in the motion picture.

In other words, she was offended that the film surpassed its genre. This news item got a good deal of publicity at the time. I wonder if it was a billboard on Hollywood's highway to hell.