Gabby Giffords made me cry. America? And you?

I sense the debate over gun control is entering into a new phase and the gun lobby is losing. After Obama's second victory, the wind changed. Republicans are suffering uncertainty, and many of them grow restless. We have absorbed years of mass murders, random violence and accidental shootings. If the nation is no longer is no able to absorb those deaths, then Congress will act first against multiple-shot magazines for guns intended for in war.

The gun lobby, so resilient, has fought back successfully against gun control until now. But its leaders are growing increasingly shrill and alarming. The GOP, facing an internal debate about its reliance on its "base," wonders how many of its base issues can be accommodated within one party platform. The day is coming, perhaps in 2016, when a Republican Presidential candidate in a debate will reply, yes, he accepts the Theory of Evolution. Many GOP elected lawmakers are growing slower to stand beside allies who demand only obedience and threaten the loss of the votes they control. In their districts, they hear frustration from the voters.

A party cannot afford to embrace every divisive issue and still claim to be called a mass movement. That is illustrated by the new bipartisan initiative on immigration. It has been a long time in coming, but there is a tectonic drift of demographic plates. The growth of the Hispanic and Asian populations, the activation and enfranchisement of African-Americans, freer access to the polls and the aging of the GOP base are among the reasons this movement is inexorable. No reasonable voter can be expected to vote against his or her best interests.

The 2012 election represented the American far right at the barricades. The fight was lost. Many on the right lost heart. Since the election, right-wing outlets like Fox News have seen a calamitous fall in their ratings.

For every issue, there comes a turning point. The Sandy Hook Massacre was one. For Civil Rights, it came when Rosa Parks took a seat on the bus. For gay rights, it was the Stonewall. Homosexuality was the reality that dare not give its name. Now we hear Stonewall cited in Obama's second inaugural.

The battle over gun control is ending. It won't end today and it won't end tomorrow, but it is surely ending. There will still be guns. But during the next session of Congress, legislation will be passed bringing reason and moderation to our guns laws. Oh, yes, there will be. And fewer children lying dead in their blood. 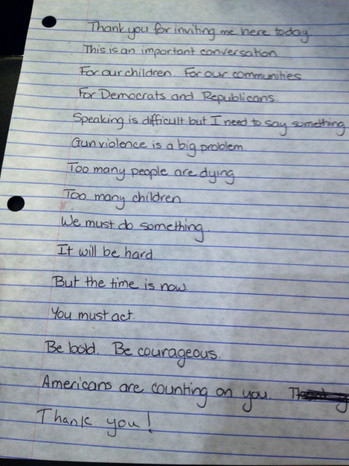