"Critic" is a four-letter word

A critic at a performance is like a eunuch at a harem. He sees it done nightly, but is unable to perform it himself. --Brendan Behan

A lot of people don't know what "critic" means. They think it means, "a person who criticizes." They don't like people who do that. It seems an impotent profession. Critics are nasty, jealous, jaded and bitter. They think it's all about them. They're know-it-alls. They want to appear superior to everyone else. They're impossible to please. They don't understand the tastes of ordinary people. They love to tear down other people's hard work. Those who can do it, do it. Those who can't do it, criticize. What gives them the right to have an opinion? We'd be better off without them.

Criticism is a destructive activity. If I like something and the critics didn't, they can't see what's right there before their eyes because they're in love with some theory. They don't have feelings; they have systems. They think they know better than creators. They praise what they would have done, instead of what an artist has done. They use foreign words to show off. They're terrified of being exposed as the empty poseurs they are. They are leeches on the skin of art.

Many wise words have been written in defense of critics, usually by themselves. Some of the wisest were written by Brad Bird, in "Ratatouille," a cartoon about rats. He gives this speech to Anton Ego, a food critic:

"In many ways, the work of a critic is easy. We risk very little yet enjoy a position over those who offer up their work and their selves to our judgment. We thrive on negative criticism, which is fun to write and to read. But the bitter truth we critics must face, is that in the grand scheme of things, the average piece of junk is more meaningful than our criticism designating it so. But there are times when a critic truly risks something, and that is in the discovery and defense of the new. The world is often unkind to new talent, new creations, the new needs friends... Not everyone can become a great artist, but a great artist can come from anywhere."

I think Anton is too hard on critics, although perhaps he is writing autobiographically. Is he correct that "average piece of junk is more meaningful than our criticism designating it so?" I would suggest that the average piece of junk is not meaningful at all, apart from the way it conditions the minds of its beholders to accept more pieces of junk. How important is criticism of it? Powerless, usually. Why do critics bother with it? I will appoint myself spokesman. We had to endure it and want our revenge. We enjoy writing scathing and witty prose. We know we are rarely writing for those who seek out junk. Perhaps we hope we entertain, and encourage the resolve of those who avoid it.

Anton says something I agree with when he speaks of "the discovery and defense of the new." By "new" I would mean not something unique, although if we are lucky we sometimes come across such things. I was lucky to write the first reviews of films by Martin Scorsese, Mike Leigh, and Gregory Nava. But I was not therefore especially gifted. All I had to do was look at what was before me, and describe what I saw. Scorsese, Leigh and Nava had to create their work. They discovered the new. A critic can defend it, publicize it, encourage it. Those are worth doing. 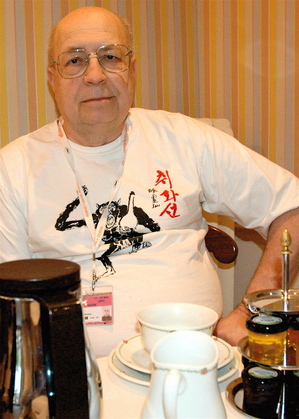 A new documentary by Todd McCarthy opened in New York the other day: "Pierre Rissient: Man of Cinema." I saw it at Toronto 2007, and I hope it opens around the country. You likely have never heard of Pierre Rissient, but it is likely he has had more influence on the world of good films in the last 60 years than anybody else. I tried to explain why in this article. Pierre says his role in many situations is to "defend," by which he means "support," the films and directors he approves. The Telluride Film Festival named one of its cinemas after him, and made T-shirts quoting him: "It is not enough to like a film. One must like it for the right reasons."

That sounds like critical snobbery, but is profoundly true. I don't think Pierre is referring only to his reasons, although knowing him well, I suppose he could be. I think he's saying you must know why you like a film, and he able to explain why, so that others can learn from an opinion not their own. It is not important to be "right" or "wrong." It is important to know why you hold an opinion, understand how it emerged from the universe of all your opinions, and help others to form their own opinions. There is no correct answer. There is simply the correct process. "An unexamined life is not worth living."

Too many simply absorb. They are depositories for input. They can hardly be expected to be critical of their own tastes, can they? Of course they can. It is not enough simply to be a "Cubs fan," although I confess I am one. It is necessary to feel the philosophy, the history, and even the poetry about the activity called "baseball." It is helpful to step outside a little, and see that sports teams are surrogates for our own desires to conquer, and expressions of our xenophobia. For some, they are even the best way ever invented to drink beer outdoors. If you are only a Cubs fan, you are a willing automaton in a business venture. Join me in being a Cubs fan, but know why you do it. What is my most fundamental reason? I am a fan because they are always the underdogs. That may be why I bought a Studebaker 30 years after the company went out of business.

But enough of baseball and cars. What about movies? I believe a good critic is a teacher. He doesn't have the answers, but he can be an example of the process of finding your own answers. He can notice things, explain them, place them in any number of contexts, ponder why some "work" and others never could. He can urge you toward older movies to expand your context for newer ones. He can examine how movies touch upon individual lives, and can be healing, or damaging. He can defend them, and regard them as important in the face of those who are "just looking for a good time." He can argue that you will have a better time at a better movie. We are all allotted an unknown but finite number of hours of consciousness. Maybe a critic can help you spend them more meaningfully.

Don't think for a second that I am proposing myself as that critic. I am only trying to define what I aspire to. I have learned most of what I know about movies from other critics, and by critics I mean everyone who has ever given me an interesting insight into a film. If "Siskel & Ebert & Roeper" had any utility at all, it was in exposing viewers, many of them still children, to the notion that it was permitted to have opinions, and expected that you should explain them.

When they were quite young, Gene Siskel took his daughters Kate and Callie to an animated children's film. On the way out, he asked them what they thought of it. One said, "I didn't like it, daddy." Gene replied, "Honey, you've just made me the proudest pop in the world."