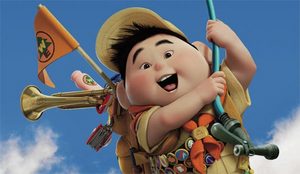 As I have so often said, if Cannes ever opens its festival with a 3D animated feature, I'll believe houses can fly. I am a doubter no longer. Cannes 2009 awarded the honor of its opening night, which traditionally goes to a French film, to Pixar's 3D "Up." I would have given anything to be there for the morning press screening, to witness the world's movie critics, festival programmers, cineastes and academics fitting on their XpanD® Series 101 3D Active Glasses, which are, quote, "a stylish, eco-friendly, and completely immersive stereoscopic 3D experience."

Alas, I was not at that screening. Our flight arrival was a day later. But I have had the great pleasure of seeing "Up" in 2D, which is how most people will see it. Faithful readers will know that I don't at all miss seeing the 3D version. All I really miss is seeing the Cannes crowd put on the glasses. At the black tie evening screening, all the top design houses in Paris will have their hand-made gowns and formalwear complemented by the stylish and eco-friendly XpanD® eyewear.

My official review is scheduled to run when the movie opens in late May, but there will be hundreds online and in print from Cannes, so I see no harm in making some unofficial observations. Such as, this is a wonderful film. It tells a story.The characters are as believable as any characters can be who spend much of their time floating above the rain forests of Venezuela. They have tempers, problems, and obsessions. They are cute and goofy, but they aren't cute in the treacly way of little cartoon animals. They're cute in the human way of the animation master Hayao Miyazaki.

That means they're earnest and plucky, and one of them is an outright villain--snaky, treacherous and probably mad. Two of the three central characters are cranky old men, which is a wonder in this era when the captain of the Starship Enterprise must be three years out of school, lest fans be asked to identify with a veteran officer. "Up" doesn't think all heroes must be young or sweet, although the third important character is a nervy kid.

The movie was directed by Pete Docter, who also directed "Monsters, Inc.," wrote "Toy Story," and was the co-writer and first director on "Wall-E" before leaving to devote full time to this project. So he's one of the leading artists of this renaissance of animation, which has limitless possibilities if it is not derailed by Hollywood's mass corporate delusion about 3D. 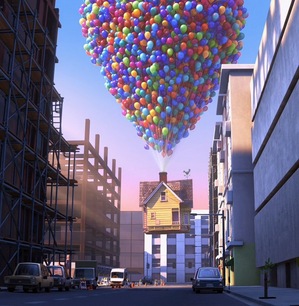 No, this will not be an entry about 3D. It's about "Up." But let me gently mention one of the film's qualities that is likely to be diminished by 3D: Its subtle and beautiful color palette. "Up," like "Finding Nemo," "Toy Story," "Shrek" and "The Lion King," uses colors in a way particularly suited to its content. It may be that the wonderful new glasses are unlike all other 3D glasses and are perfectly transparent, but given their purpose, how can they be? Unlike the tinted glasses used for most 3D glasses, which cost a dollar or less, these babies use lenses that flicker open and closed at the shutter rate of the projector. They cost around $25, and have to be recycled. Don't look for them in your local theater anytime real soon.

I'll have to see "Up"in 3D to experience their effectiveness. I'm afraid the brightness and delicate shadings of the color palate will become slightly dingy, slightly flattened out, like looking through a window that needs Windex. With standard 3D movies, take off the glasses and see how much brighter the "real" screen is. I predict the Cannes screening will look better than almost every U.S. screening.

There is also the annoyance of 3D itself. It is a marketing gimmick designed (1) to justify higher ticket prices, and (2) make piracy harder. Yet as most of the world will continue to use 2D, pirated prints will remain a reality. The effect of 3D adds nothing to the viewing experience, and I have never once heard an audience member complain that a movie is not in 3D. Kids say they "like" it, but kids are inclined to say they "like" anything that is animated and that they get to see in a movie theater. It is the responsibility of parents to explain this useful truth: If it ain't broke. don't fix it. Every single frame of a 3D movie gives you something to look at that is not necessary. 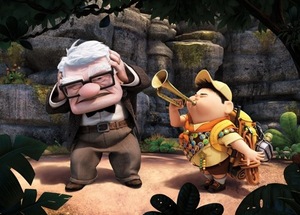 Now, then. Back to the "true" film, the 2D version of "Up." Find a theater showing it, save yourself some money, and have a terrific visual experience. This is a story as tickling to the imagination as the magical animated films of my childhood, when I naively thought that because their colors were brighter, their character outlines more defined and their plots simpler, they were actually more realistic than regular films.

"Up" begins with a romance as sweet and lovely as any I can recall in feature animation. Two children named Carl and Ellie meet and discover they share the same dream of someday being daring explorers. In newsreels, they see the exploits of a daring adventurer named Charles Muntz (Christopher Plummer), who uses his gigantic airship to explore a lost world on a plateau in Venezuela and bring back the bones of fantastic creatures previously unknown to man. When his discoveries were accused of being faked, he flies off enraged to South America again, vowing to bring back living creatures to prove his claims.

Nothing is heard from him for years. Ellie and Carl (Edward Asner) grow up, have a courtship, marry, buy a ramshackle house and turn it into their dream home, are happy together, and grow old. This process is silent except for music (Ellie doesn't even have a voice credit). It's shown by Docter in a lovely sequence, without dialogue, that deals with the life experience in a way that is almost never found in family animation. The lovebirds save their loose change in a gallon jug intended to finance their trip to the legendary Paradise Falls, but real life gets in the way: Flat tires, home repairs, medical bills. Then they make a heartbreaking discovery. This interlude is poetic and touching. 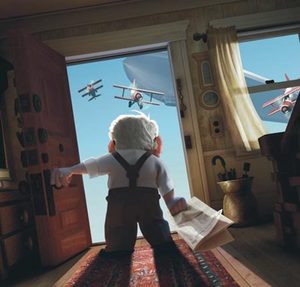 The focus of the film is on Carl's life after Ellie. He becomes a recluse, holds out against the world, keeps his home as a memorial, talks to the absent Ellie. One day he decides to pack up and fly away--literally. Having worked all his life as a balloon man, he has the equipment on hand to suspend the house from countless helium-filled balloons and fulfill his dream of seeking Paradise Falls. What he wasn't counting on was an inadvertent stowaway--Russell (Jordan Nagai), a dutiful Wilderness Explorer Scout, who looks Asian-American to me.

What they find at Paradise Falls and what happens there I will not say. But I will describe Charles Muntz's gigantic airship that is hovering there. It's a triumph of design, and perhaps owes its inspiration, though not its appearance, to Miyazaki's "Castle in the Sky." The exterior is nothing special: a really big zeppelin. But the interior, now, is one of those movie spaces you have the feeling you'll remember.

With vast inside spaces, the airship is outfitted like a great ocean liner from the golden age, with a stately dining room, long corridors, a display space rivaling the Natural History Museum, attics spacious enough to harbor fighter planes. Muntz, who must be a centenarian by now, is hale, hearty and mean, his solitary life shared only by robotic dogs. 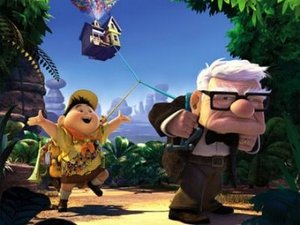 The adventures on the jungle plateau are satisfying in a Mummy/Tomb Raider/Indiana Jones sort of way. But they aren't the whole point of the film. This isn't a movie like "Monsters vs. Aliens," that's mostly just frenetic action. There are stakes here, and personalities involved, and two old men battling for meaning in their lives. And a kid who, for once, isn't smarter than all the adults. And a loyal dog. And an animal sidekick. And always that house and its balloons.

I haven't spoken to Pete Docter since we met on a Disney cruise ship, where he was maybe getting inspiration for the airship interior. I know some things about his work. He likes for his films to contain some sorts of life lessons. Like Walt Disney, he doesn't mind if sometimes they're scary. In Wall-E, he incorporated a pointed critique of consumer excess. In "Up," his whole film is an oblique rebuke to those who think action heroes have to be young.

Is this a daring choice for the opening night at Cannes? Not if you've seen it. Is it a significant choice? Yes, conferring the festival's august prestige upon animation. Will it be a great experience for the 2,246 members of the audience? Yes, except for that damned 3D.