A quintessence of dust

An idle comment caught my eye: "After all, no one saw the Big Bang." Somewhere else I read, "The universe has no opinion." Then I read that the next Hubble telescope will be able to peer six times as far into space and time as the one now in orbit.

An issue of Discover magazine arrived with a cover story about astronomers struggling with the problem of information overload. The new telescopes have moved far beyond visual images, and monitor a flood of information picked up on many wave lengths. Not even super computers can adequately organize and assess their vast findings. Amazing discoveries may be buried within the data.

None of this immensity is affected by what I think about it. It doesn't depend on being thought about. If it is true that our galaxy alone might contain 30 to 80 million earth-like planets, and if every one of them were occupied by sentient beings, it doesn't depend on what they're thinking, either. It all simply exists.

That is why the process of evolution is so compelling to me. On this planet, and probably countless more, inanimate atoms became molecules which formed cells and over billions of years those cells evolved into complex organisms which finally became viruses, plants, animals, salamanders, banyan trees and human beings. Without giving it any thought, with no way to think it, the universe brought into existence a way of making itself seen. 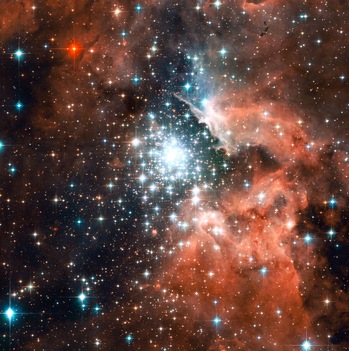 There is more than one way to see. A leaf turns to the light. A chimpanzee selects a piece of fruit. A fish sees a smaller fish. An eagle sees a rabbit. A dolphin rescues a sailor. A dog welcomes us home. While all of these actions are guided by a process falling under the general heading of Intelligence, humans seem to be fairly unique in our ability for conscious thought. We see, we know, and we know we know.

This is a blessing and it carries a price. To know you live is to know you die. Having studied several cats at close range over a period of years, I've concluded they don't give it a moment's notice. They know they want to live, which is why they get out of trouble as fast as they can. Then they take a nap. 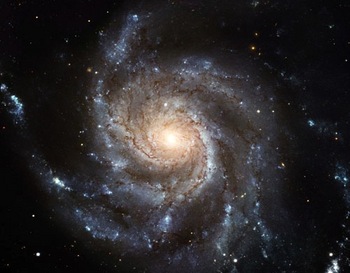 I read articles about astronomy and physics. It doesn't matter to me how much I understand. Their buried message is always the same: Somewhere out there, or somewhere deep inside, there are mysteries of which we perceive only vague shadows, and there are possibly more mysteries within those shadows, continuing indefinitely.

Dark matter was a secret to us. Now we know it exists. Does it have its own secrets? We speak of quantum particles. They are below atoms. Do they contain levels beneath? When we get to the quantum particle, have we reached the bottom, or only the deepest point to which we can penetrate?

The further we peer into space, the further we are peering into the past. Although I have no realistic grasp of the distance represented in a "light year," I understand what the words indicate. Still less do I comprehend "a billion light years," but I understand that Hubble is looking further and further back into the immensity of time. 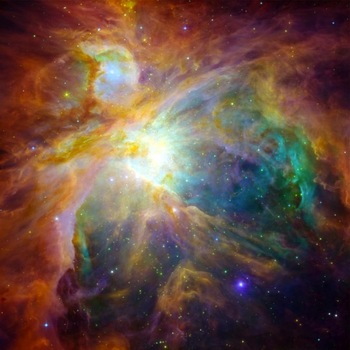 I'm going downtown to see a movie today. I understand that the screening is distant from me in space and time. I know why we see lightning before we hear thunder. I understand why a foreign correspondent for CNN pauses before answering a question; the question must reach and the answer must return. I have some idea of how many "miles" away the planet Mars may be. I understand its reflected light reaches us after a delay of some minutes. But when we see light from a star that has journeyed four million light years, all I really understand is that the star is forever out of the reach of my species.

What we are left with are the cosmic shadows on the wall of Plato's cave. Ultimately the images from Hubble will give us a glimpse of conditions that existed an infinitesimal instant after the Big Bang. There will never be an image of the Big Bang itself, because it had no image. There was Nothing, and then there was Something, and all we can hope is to see that Something as soon as possible after it became. 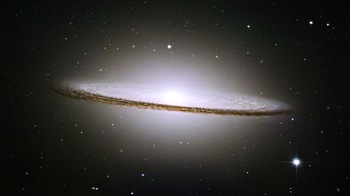 If the matter in the universe has organized itself into you and me and Stephen Hawking, I can think of no reason why the same organizational principles wouldn't apply everywhere. In the night sky we look at the suns of a multitude of planets that might harbor forms of intelligence that look back at our sun. Astronomers search for "earth-like" planets because they know life is possible on a planet like ours. They start with what they know. Every day we read speculation about new forms of life. I don't know why it cheers me to learn that a buried sea on Europa, a moon of Jupiter, could harbor "a form of life," but it does.

It isn't necessary for me to understand much more about science than what I read in magazines like New Scientist, Scientific American, Discover, or in the daily newspaper. It isn't necessary for me to understand about movies, either, but that's the direction life has taken me. Socrates told us, "the unexamined life is not worth living." I think he's calling for curiosity, more than knowledge. In every human society at all times and at all levels, the curious are at the leading edge. 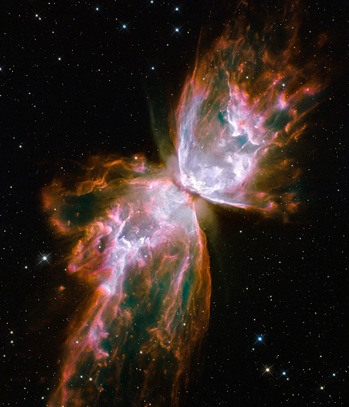 But what good does it do me to think of the universe as an unthinking mechanism vast beyond comprehension? It gives me the consolation of believing I conceive it as it really is. It makes me thankful that I can conceive it at all. I could have been a pair of ragged claws, scuttling across the floors of silent seas. In this connection I find the Theory of Evolution a great consolation. It helps me understand how life came about and how I came to be. It reveals a logical principle I believe applies everywhere in the universe and at all levels: Of all the things that exist, animate and inanimate, some will be more successful than others at continuing to exist. Of those, some will evolve into greater complexity. This isn't "progress," it is simply the way things work. On this dot of space and in this instant of time, the human mind is a great success story, and I am fortunate to possess one. No, even that's not true, because a goldfish isn't unfortunate to lack one. It's just that knowing what I know, I would rather be a human than a goldfish.

Some reject the Theory of Evolution because it offers no consolation in the face of death. They might just as well blame it for explaining why minds can conceive of death. Living things must die. That I can plainly see. That we are aware of our inevitable death is the price we must pay for being aware at all. On the whole, I think we're getting a good deal.

When I die, what happens? Nothing much. Every atom of my body will continue to exist. The sum of the universe will be the same. The universe will not know or care. But think of it another way. Take a moment to study this illustration: 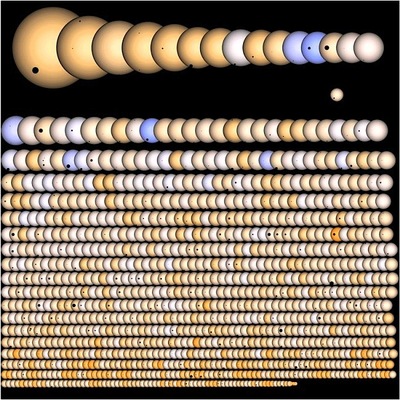 The graphic was created by the National Aeronautics and Space Administration to represent 1,235 planets we know to exist, and the suns they orbit. Each planet is a black dot. Our sun is below the top row at the right. It's estimated that millions of such planets exist in our galaxy alone. On some of those dots, or smaller ones we haven't seen yet, it's possible that evolution has produced minds capable of self-awareness. Those minds belong to beings who think, and ergo know they exist. Some of them wonder why they exist. Some of them look into the night sky and ask the same questions we ask.

On every planet where a sufficient degree of intelligence has developed, the Theory of Evolution must eventually be discovered. It helps those beings understand how they are. It doesn't explain why they are. There is no reason the universe "needed" to evolve intelligent beings, but it has. It might have been inevitable because of the fact of Natural Selection. 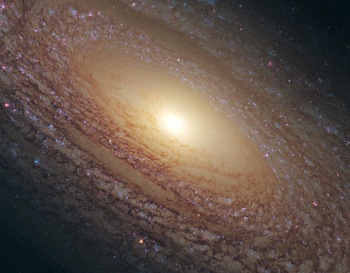 My curiosity leads me to science, my admiration for logic leads me to the Theory of Evolution, my pride rejects simplistic fables to describe the facts I observe. Where do I find my consolations? There are many ways to be consoled. Everyone deserves to find their own way, and find such peace as they can. I find my greatest consolations come from Art. An artist can express my feelings in the same way as an intelligent signal received from one of those 1,235 dots. Such a signal might translate as, "Yes, I exist, and I want to shout to you across space and time that we are not alone."

A message from light years away would probably miss me in my box of space and time, but I find that Art can shout to me across a few years or centuries, and it carries the same message: "Yes, I exist, and you are not alone."

What a piece of work is a man, how noble in reason, how infinite in faculties, in form and moving how express and admirable, in action how like an angel, in apprehension how like a god! the beauty of the world, the paragon of animals-- and yet, to me, what is this quintessence of dust? Man delights not me--nor woman neither, though by your smiling you seem to say so.

That's what we are, a quintessence of dust. That Shakespeare could so conclude, and then end with a little joke is, to me, a great comfort.