Does America really NEED a sequel to the 2001 Ben-Stiller-starring-and-directed send-up of the fashion and supermodeling worlds, and the apparently ceaseless vacuity thereof and therein? For the first 20 minutes or so of “Zoolander 2,” the answer is a pretty flat “no.” The sequel, again directed by and starring Stiller (in the title role of Derek Zoolander, whose skull is so thoroughly empty that to call him an “airhead” would be an insult to air), along with Owen Wilson as counterpart dimbulb male model Hansel, and many others from the original cast, begins with a gag that’s already been overplayed in the trailers. That is, the “assassination” of pop star Justin Bieber, who, before he saunters off this mortal coil, takes a selfie while making a signature Derek Zoolander “look.” What follows is a multi-media-personality “whatever happened to?” sequence. Every TV news personality of note save for maybe Brian Williams adds a sound bite to the story, which features an arguably tasteless fictional disaster befalling a construction in downtown Manhattan close to the Hudson River. Soon, the audience sees a mountain lair in a snowy, windy surrounding, and the title in the lower right hand corner of the screen reads “Extreme Northern New Jersey.” I’m a sucker for a good Jersey joke but I still wasn’t hooked.

Eventually I was, though. “Zoolander 2” is not just relentless in its joking, it becomes relentlessly clever in debunking itself as it goes along. “This is barely a movie,” I thought, as it hopped from one inane plot device to ‘80s music cue to ‘80s music video pastiche to inane plot point. But the observations about the fashion world got, if not sharper (I don’t know enough about the contemporary fashion world to vouch for accuracy), then definitely more pointed, beginning with Kyle Mooney’s portrayal of a hot new designer named Don Atari whose aesthetic pinions on how much everything “sucks” and is “stupid.” Derek and Hansel have been persuaded via old friend Billy Zane to participate in Atari’s fashion show in Rome, lorded over by a spectacularly pompous couture doyen named Alexanya Atoz, played by a nearly unrecognizable Kristen Wiig. Atoz’s schtick is elaborately mispronouncing English words, and this is hammered almost as insistently as is Derek’s idiocy. The biggest comic risk the movie ends up taking, as it happens, is in scenes in which Derek doesn’t “get” something. And this is entirely the case lot once Penelope Cruz, playing a member of Interpol, Fashion Crime Division, invests him and Hansel in a world-saving (or something) mission. The character is literally so dumb that it’s not funny, except it becomes funny by dint of the way it’s not funny, and so on.

And honestly, it then becomes very funny, funny enough that my wife observed that she thought I was going to have a stroke, as I was laughing so much. I was also laughing hard enough that I stopped taking notes. So what more can I tell you about this movie? Well, there are enough cameos in the damn thing that you might eventually wonder why you yourself are not in it. The bit in which Benedict Cumberbatch appears as an apparently pan-gender supermodel named “All” does play fast and loose with the skirting-ideological-objectionability thing, but on the other hand, every character and personage depicted in this movie is utterly, one might even say abjectly, ridiculous, so for “All” to be depicted as not ridiculous might have constituted a progressively active judgment, but also would have been on the inconsistent side. Also, this is a movie that makes an elaborate joke about the prospect of a 13-year-old boy getting his heart carved out of his chest, and the real-life denizens of the real-life fashion world attaining eternal youth by drinking his blood. Yes, you read that correctly. This is where Will Ferrell’s fashion villain Mugatu comes in, along with more cameos, and Cyrus Arnold, a very nervy tween, in the role of Derek’s wayward, and purposefully chubby, son.

As the action gets more furious, and Owen Wilson in particular is given more and more of an opportunity to unspool his seemingly inexhaustible comic genius, it might be easy to miss the fact that “Zoolander 2” bites a certain hand with more perspicacity than that displayed in Stiller’s 2008 I-hate-Hollywood effort “Tropic Thunder.” It takes a certain something to convince the likes of Tommy Hilfiger and Alexander Wang to show up and play themselves, and depict those selves as eager to participate in ritual murder and cannibalism. Sounds pretty heavy-handed as satire goes, but the thing is, “Zoolander 2” has indulged in so many inversions of its narrative by this time that the insult to fashionistas comes off as both entirely sincere and futilely insubstantial. But this is all better gist for some future Ivy League film studies class than this review. I laughed so much my wife thought I was going to have a stroke. There’s the blurb for you, Paramount. Thanks, Derek! 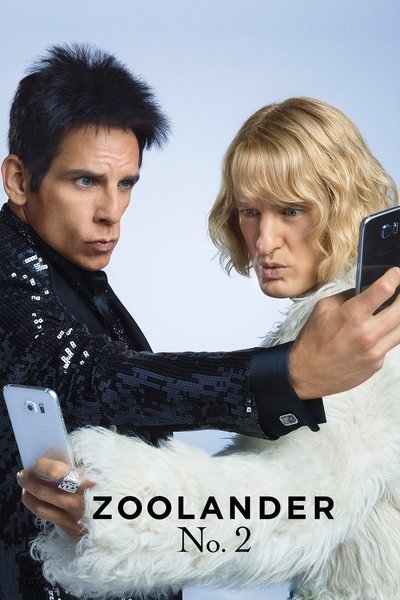 Rated PG-13 for crude and sexual content, a scene of exaggerated violence, and brief strong language.

Will Ferrell as Mugatu

Benedict Cumberbatch as All

Justin Bieber as Himself