Like classic military comedies from “Catch-22” to “M*A*S*H,” Talya Lavie’s “Zero Motivation” offers its own appealing blend of irreverence and absurdism. But what makes the film so original is not that distinction, or the greater one that the soldiers observed here are female and Israeli. The film’s real difference, rather, lies in a kind of cinematic intelligence that unveils itself very gradually and subtly.

This reviewer, for example, thought he had the film sized up roughly a third of the way through. Another third later, he realized his earlier approximate certainty had come far too soon. And by the end, he was impressed in a way that he hadn’t imagined he would be even a few minutes before.

These shifting perspectives are worth noting as a way of describing how “Zero Motivation,” unlike most films currently, doesn’t try to create a single impression early on that will simply be extended and amplified as the narrative continues. Rather, it deepens and changes it goes along, ending up far richer and more resonant than many viewers will expect initially.

This, in part, emerges from the narrative being structured as three consecutive stories about the same set of characters: soldiers who work in boring low-level jobs as paper-pushers at a military base in southern Israel. The first tale centers on the fraught friendship of two of these women. As it opens, they are returning to the base and nervy, sharp-edged Zohar (Dana Ivgy) is doing what she can to help and placate petulant, recessive Daffi (Nelly Tagar), everything from saving her a seat on the bus to carrying her pack when they have to leave their ride and walk.

Zohar, we quickly see, is happy as long as she’s with Daffi and they are engaged in some of the silly pastimes that make up their normal routine, like singing pop songs and playing video games on their work computers. For her part, Daffi isn’t made happy by any of this. She hates the base, is merely killing time with Zohar, and has been aggressively petitioning her superiors for a transfer to Tel Aviv.

It’s a mark of the film’s complexity that, even while describing the evolving emotional snarls between these two women, it also provides detailed portraits of several other characters. One, Rama (Shani Klein), the office commander, is a typical autocrat in some ways, yet is also ambitious to an extent that makes her both pliant and uncertain. Then there’s the latest woman to appear on base, whom Daffi’s convinced is the replacement that will allow her leave for Tel Aviv until a dark and bizarre incident proves otherwise.

Through much of the story, underlying sexual tensions seem to explain certain aspects of how the characters behave. Yet things are never exactly as they first appear. When the tale’s second part begins, for example, the sense that Zohar may be motivated by a lesbian attraction to Daffi is displaced by another twist: after being chided by her fellows for being the lone virgin in their group, she sets out to snare a man.

“There’s a war on,” a character says at one point in the film. “Soldiers are dying.” We never do learn which war exactly, or who the enemy is. But rather than damning “Zero Motivation” for lacking political and historical specificity, this ambiguity underlines its emotional and thematic acuity. In essence, there’s always a war on, and not just in Israel or the Middle East. Put any group of untethered individuals, male or female, together in a closed, pressured situation and a war will soon erupt. Here, the weapons are words, paper and staple guns, but the conflicts are no less serious–and sometimes violent–for that.

By the time the narrative reaches its final section, it’s clear that there will be no easy outs or simple solutions for any of the main characters. Some will climb the career ladder, others will end up in the brig; but the war will continue, at varying degrees of intensity, as long as they are in the military–and perhaps well after. At the same time, though, these soldiers are not simply rats in a maze. They are complicated people who grow and learn, although their changes sometimes entail torturous challenges.

As this debut feature proves, Talya Lavie has extraordinary gifts as both a writer and a director. Her script’s narrative is shrewd and cleverly wrought to a fault, with no end of unexpected turns and well-drawn characters. It also has the virtue of never sacrificing perceptive thoughtfulness to laughs, its comedy being commendably of the most oblique, understated sort. As director, Lavie gets terrific performances out all of her main actors, and has a keen flair for comic and dramatic timing. In sum, “Zero Motivation” is not only a pleasure in itself but also seems to signal the beginning of an important career. 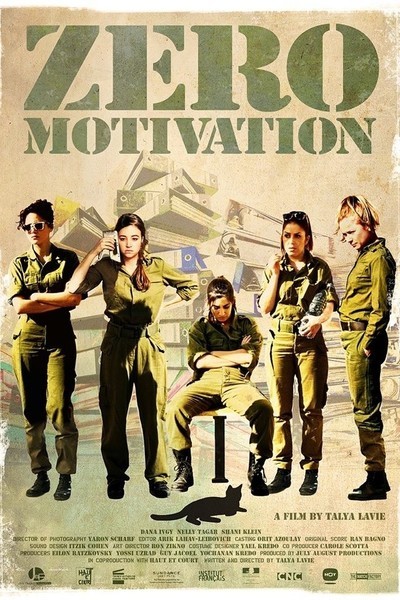