You Were Never Really Here

Joe (Joaquin Phoenix) is a lumbering, slow-moving giant. His flesh is so heavy and thick his emotions can't reach the surface. He's a closed system of trauma, nervous system flooded by flashbacks from combat experience and an abusive childhood. His face and neck are covered in a thick beard. When he pulls his sweatshirt hood up over his head, he turns into negative space. A blur in the atmosphere. Joe is the agonized center of "You Were Never Really Here," directed by Lynne Ramsay ("Ratcatcher," "Morvern Callar," "We Need To Talk About Kevin"). Based on Jonathan Ames' novella of the same name, the film is rooted so firmly in Joe's point of view he sometimes is absent from the screen entirely. We're inside his head.

In the first scene, Joe is only shown in fragments: his meaty hands pick up some ominous-looking objects, a roll of duct tape, a bloody hammer. We are in the aftermath of some terrible event. Ramsay does not allow us to see beyond the tight periphery of the frame. (The sequence is reminiscent of the chilling opening of Ramsay's 2002 film "Morvern Callar," even down to the closeup of a cheap gold necklace with a girl's name in swoopy gold script. Awful things have occurred, but she doesn't let us see it.)

Joe lives at home in Brooklyn taking care of his frail elderly mother (Judith Roberts). He works for a private detective as a hired gun, although his preferred weapon is a hammer (as Ames explains in the novella's typically dark laconic tone: "Left very little evidence, excellent in close quarters, and seemed to frighten everyone.") Joe is hired to rescue a Senator's underage daughter (Ekaterina Samsonov) from a sex trafficking ring, run out of a sleek townhouse. Joe gathers together the tools he will need. He begins staking out the joint. It's not his first time at this seedy rodeo.

There are obvious nods to "Taxi Driver" in this material, as well as some nods to "The Big Sleep," too, with a brave lone figure strolling into an evil world where politics and sexual exploitation filter into the top echelons of society. "You Were Never Really Here" has a jittery caffeinated energy reminiscent of the great sleazeball thrillers of the 1970s and '80s, gritty New York movies, corrupt cop movies. Ramsay's gift of invention is in overdrive (the title credit screen is practically worth the price of admission), and her approach is audacious. She does not sentimentalize Joe (and Joaquin Phoenix is her great partner in this). She doesn't manipulate how we are supposed to feel about him. In one moment, he's tender and funny with his mother. In the next moment, he's clocking some pimp over the head with a hammer. Jonny Greenwood's score hums and pulses underneath, creating an atmosphere of nerve-jangling tension and dread. The sound design is a living nervous breakdown. New York roars in a relentless cacophony of traffic, subways, horns. In one scene, Joe sits in a diner, and the air is filled with the conversations of people at other tables. He can't filter any of it out.

In her films, Ramsay digs into the in-between spaces, the voids and vacuums where marginalized or inarticulate people try to understand the codes of a baffling world. They're outsiders. They're survivors. But Ramsay is a tough cookie and she takes a tough approach. Her films are not exactly pleas for empathy. Just look at the material she has chosen thus far. Consider "Morvern Callar." We can guess at the things in Morvern's past that drive her to do the things she does, but Ramsay doesn't connect the dots for us. The voids, the vacuums, persist, and it's where people like Morvern or Joe operate, in the shadows, on the periphery, hiding in plain sight. Blink and you miss them. Ramsay's approach requires great performances. Her films might come off as genre exercises otherwise.

It's tempting to say Phoenix has never been better than he is here, but that just would not be true. He was great in "The Master" and "Inherent Vice," in two very different kinds of roles. His career has been a bit all over the place, but in the last few years he's settled into himself. It's like he feels the earth beneath his feet, and he knows what to do. It's been exhilarating to witness. At his very best, he doesn't "show his work." You're just hanging out with whatever peculiar character he's playing. He's not self-consciously "stretching" as an actor by taking these different kinds of roles. It's just that he, to steal from Walt Whitman, "contains multitudes." In "You Were Never Really Here," he sometimes vibrates with unmanaged trauma and suicidal ideation. His tears are heart-rending because he is so helpless when they come. His translucent green eyes pulse with mute torment. You are never 100% sure what Joe is going to do next.

"You Were Never Really Here" is a taut and almost unbearably intense 90-minutes, without an ounce of fat on it. Ramsay doesn't give you a second to breathe. It's grim, it’s dark, it’s delirious fun. 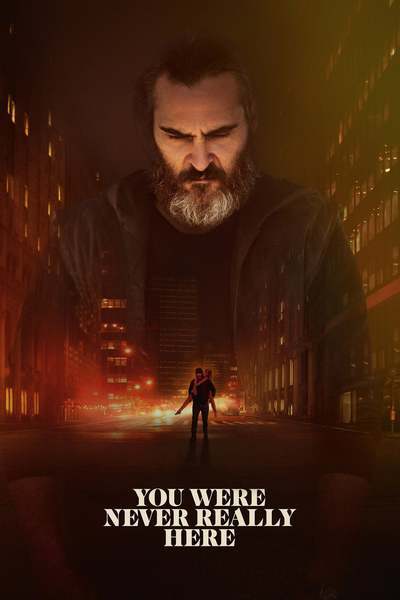