WR: Mysteries of the Organism

If only we were not so rigid, not so unbending in our minds and bodies we could release our damned-up human energy in a glooorrrrrious outflowing of love and self-realization. And if we could do THAT, why ... we could not only achieve greater sexual satisfaction, but maybe even cure what ails Soviet Marxism, and solve the problems of American Puritanism, too. And have a good time.

That is as close as I can get to the argument of "WR: Mysteries of the Organism," an insanely brilliant comedy by one Dusan Makavejev. He has come this way before; his "Innocence Unprotected" won the 1968 Chicago International Film Festival, and "WR" took the best director award at the 1971 Chicago festival. It has also made the rounds of the other big festivals; around-the-clock screenings had to be scheduled at Cannes, there was an uproar at New York, it was banned in Yugoslavia and at the Venice Film Festival, etc.

Makavejev himself is a large, happy, open-faced Yugoslavian who says he is astonished that his film has caused such controversy. He is not really astonished at all, of course; his films are designed so that there's a little something in all of them to offend somebody. But with "WR" he has outdone himself, taking on the State Religions of two superpowers: Marxism (Russia) and psychiatry (America). In the East, his film was banned because it might offend the Russians. In the West, followers of Wilhelm Reich charged that Makavejev had cannibalized the work of that late persecuted genius. In England, they thought the film was pornographic. And so on.

"Maybe it is like a mirror," Makavejev said one late night while walking up Lincoln Av. "People hold it up to themselves and see reflected only what they are most offended by."

What was he doing on Lincoln Av. past midnight? His trip was in the nature of a pilgrimage. He wished to see the place where Jawn Deeelingher had been shot. He thought perhaps Deeelingher would make an interesting movie.

In the world of Makavejev, you can be sure of one thing only: His film of Deeelingher will not be a gangster movie. He will claim it is, but somehow other scenes will sneak in, footage from ancient Soviet epics, a musical number or two. He works in collage, I guess you'd say. He gets his effects by juxtaposing scenes that have little to do with one another. In "WR," he's all over the map.

The main sequences involve (a) an irreverent documentary about Reich, including interviews with family members and former associates; (b) scenes from a wheezy Russian movie idolizing Stalin fervently but not too well; (c) a melodrama in which a Russian ice-skating star experiences his first orgasm through the cooperation of a young Yugoslavian follower of Reich, and then beheads her with his ice skate ("It's a Champion - the best," the morgue attendant says, examining the skate), and (d) assorted documentary footage of New York freaks, transvestites, painters, and - well, you know, New York folks.

All of this is done as sort of an ideological juggling act, with Makavejev at the center, deadpan, yet always with his eyes slightly widened at the bizarre variety of human experience. As a Yugoslavian, he is naturally weary of doctrinaire Soviet Marxism - not because he is anti-Marxist, but because the Soviets have so little sense of humor about politics.

And if the Russians cannot smile about politics, we Americans are positively long-faced about sex. He wants to loosen us up a little, maybe shock us if that's what we need, but get us to smile, smile, smile, and bankrupt the industry in how-to sex manuals. He takes the things we take most seriously and shows us how absurd they look from a certain light. If he can reduce everything to the absurd, who knows? We may be left in a world where people can take off their, ideological overcoats, roll up their shy shirtsleeves and give the old organism a suntan. 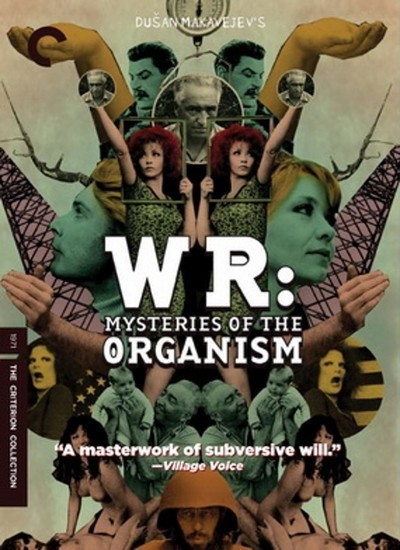