"Wolves" is the kind of pleasantly eccentric werewolf coming-of-age story that should be seen as the third-billed title in a horror movie marathon. When viewed on its own, one can't help but wonder who "Wolves"' was made for. Writer/director David Hayter, most famous as the voice-actor who plays Solid Snake in the "Metal Gear Solid" video game series, typically errs on the side of caution, and only tentatively lets his id run roughshod over his corny, Stephen King-like story. "Wolves" is consequently too violent to be a "Twilight" knockoff, and too cuddly to be an effectively freaky tale of a boy who, to paraphrase "Werewolf Bar Mitzvah," becomes a man while also becoming a wolf.

Hayter's quasi-adult family drama is set in a world defined by tacky, pseudo-archetypal heartland Americana (ie: corn fields and roadhouses). All of the film's principal characters are werewolves, a creative decision that suggests Hayter took at least a page or two out of Stephenie Meyer's domesticated-monster playbook.

"Wolves" is set in a world where the status quo is maintained absolutely by werewolves, making it difficult to see Cayden Richards (Lucas Till), the film's pubescent lead protagonist, as a real outsider. Cayden suffers a serious identity crisis when he transforms into a hairy, hormonal monster shortly before he discovers his parents' corpses. Cayden is a teen-wolf, as one-eyed bar fly and fellow lycanthrope Wild Joe (John Pyper-Ferguson) explains to Cayden. Joe then directs Cayden to Lupine Ridge, where he promises Cayden will find more answers. While there, Cayden gets guidance from paternal werewolf-rancher John Tollerman (Stephen McHattie), falls in love with self-sufficient teen-wolfette Angelina (Merritt Patterson), and makes enemies with local were-bully Connor (Jason Momoa).

Of Cayden 's new relationships, his tentative bond with Joe, the one werewolf who doesn't want to live in Lupine Ridge, is the most interesting. But Joe disappears right after he sets Cayden on his way to Every-Werewolfton, USA. Cayden's relationship with Angelina is the next-most interesting since she's supposed to come off as a savvy, salt-of-the-earth type with problems and passions of her own. Sadly, while Angelina's fraught relationship with drunk mother Gail (Melanie Scrofano) is theoretically interesting, there are no emotional stakes to their mother/daughter bond. Angelina knows that her mom's a screw-up, but there is no mess Gail can make that Angelina won't either begrudgingly clean up or turn a blind eye to.

But while Alison is a semi-dutiful daughter, she also happens to have a healthy carnal interest in Cayden, as we see in the scene where Angelina takes control, and mounts him. The schizoid disconnect between the two sides of Angelina's personality are never reconciled, though it's easier to believe Angelina as a tough-loving daughter than a mini-sexpot since the scene where she and Cayden fool around is as fetishized as any of Michael Bay's PG-13 leering shots of Megan Fox's hindquarters. You see her push him down, toss her hair over her shoulder, and straddle him in a medium close-up that highlights the form-fitting under-garments that negligibly cover Patterson's assets. Angelina is only as empowered as a Maxim pin-up model.

Angelina's split personality is emblematic of the weird cute-but-"adult" tone Hayter strives for throughout "Wolves." At least Momoa is allowed to ham it up in one scene where his character triumphantly boasts about how he plans on deflowering Angelina. For a fleeting moment, Momoa is allowed to release his inner character, and he accordingly bugs out like Michael Keaton in "Beetlejuice."

Unfortunately, that appreciably goofy and supremely confident performance doesn't jibe with the rest of "Wolves," an uneasy coming-of-age-story for people who want to improve "Twilight," but wrongfully assume that the worst thing about "Twilight" was its lack of explicitly violent and sexual overtones. "Wolves"' over-the-top gore, and its teasing libidinal urges make no sense within the context of the film's generic coming-of-age fantasy plot. Here, boy meets girl, boy learns he has to fight for girl despite her supposed autonomy, then boys fights for girl with the unexpected help of some other boys. If you must see "Wolves," go in with high hopes, and low expectations. 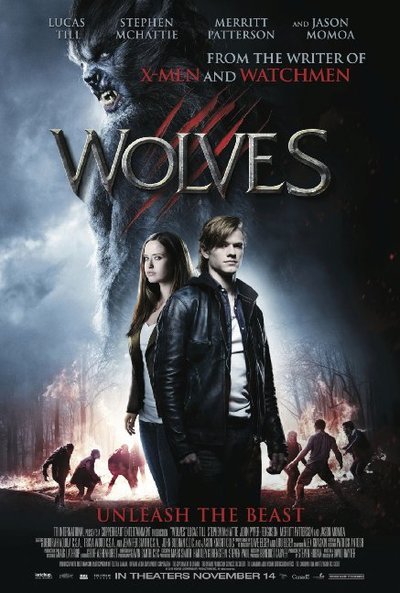 Rated R for bloody violence throughout, and some sexuality

Lucas Till as Cayden Richards