Spanish cult filmmaker's Alex de la Iglesia's comedies are acquired tastes. His morbid fantasies are as surreal as Pedro Almodóvar's early farces, and as proudly prickly as Alex Cox's punk comedies. They're also as unfocused and prematurely jaded as Kevin Smith's films. It's impossible to love everything about de la Iglesia's movies. They're charmingly irreverent but also callow, and all over the map. "Witching and Bitching" is a typical de la Iglesia film. Imagine a horror-comedy about a trio of misogynistic morons who are terrorized by a coven of witches. Now imagine that film as a live-action cartoon based on a non-existent Sergio Aragones Mad Magazine comic strip. "Witching and Bitching" is accordingly overlong, and conceptually thin. But like most of de la Iglesia's films, it's also freakishly energetic, and often hysterical.

Through insistent, flag-planting dialogue, co-written by de la Iglesia and frequent collaborator Jorge Guerricaechevarria, "Witching and Bitching" initially comes across as a proudly juvenile satire about men that fear women. Jose (Hugo Silva) is three months behind in alimony payments. Disguised as a street performer dressed like Jesus Christ, he robs a pawn shop with son Sergio (Gabriel Angel Delgado) in tow. Jose, who's more comically insipid than truly hateful, rants about ex-wife Silvia (Macarena Gomez), and consequently winds up in the company of other frustrated men. Once "Witching and Bitching" settles down, it's essentially a live-action "Scooby Doo" episode wherein Jose and his two woman-hating accomplices, Tony (Mario Casas) and Manuel (Jaime Ordonez), try to rescue Sergio from a coven of witches.

But early on, de la Iglesia and Guerricaechevarria take time to make fun of Jose and his gang for feeling persecuted by the women in their lives. They don't follow through on that notion because their cartoonish style of comedy is disruptive, not consistent or especially thoughtful. They're proudly crass filmmakers that don't take their role as social commentators especially seriously. So instead of talking about how much they resent women, Tony and Manuel talk about literally shrinking in horror when confronted with beautiful romantic conquests, or running scared when asked to cook for their partners. Tony gets the best line during the group's most pointed down-with-women rap session, whining about how confused he gets by "all those buttons" on his stove.

De la Iglesia and Guerricaechevarria stand by their men because they don't really treat them like flesh-and-blood characters. Think of "Witching and Bitching" as a series of narratively-connected gag strips. Characters, both pro- and antagonists, do not grow, or have substantial arcs. The only character who does change over the course of the film is Eva (Carolina Bang), the youngest of Sergio's witchy tormentors.

At first, Eva's a neo-goth terror, lasciviously hissing at Jose whenever she's not torturing his friends. But soon it's revealed that Eva doesn't want to just molest Jose: she wants to fall in love with him. This makes her a good person, but an awful witch. Her supernatural elders, including the typically magnetic Carmen Maura, tease her, insisting that she throw caution to the wind, and have more kinky sex. De la Iglesia and Guerricacechevarria casually go too far with this joke, making one witch ("I'm So Excited"'s Carlos Areces, in drag) carelessly toss off a laundry list of deviant acts, including golden showers and coprophagia. The joke is frustrating, because it's a good gag told carelessly. It's also great because it comes out of nowhere.

Bang, star of de la Iglesia's excellent "The Last Circus," growls and pouts her way through two thankless but essential roles: comically vampy eye candy and kittenish, dejected Medusa. With her long hair half-shaved and her eyes aglow with milk-white, Marilyn Manson-esque contact lenses, Bang is a perfect poster child for de la Iglesia's post-punk style. The film starts and stops with her, so if you don't like Bang, there's a good chance you won't care for the rest of "Witching and Bitching." Still, if you are able to get on the film's wavelength, you'll find it equally bratty and bubbly. 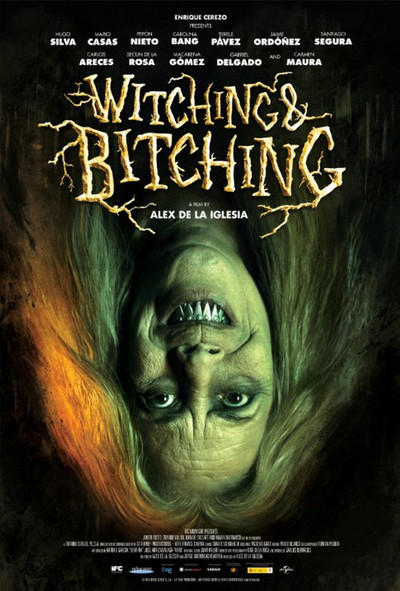