Amy Poehler, Rachel Dratch, Maya Rudolph, Ana Gasteyer, Paula Pell and Emily Spivey would seem to be delightful company wherever they went, but especially in Napa Valley, the scenic section of Northern California where the sun shines on rolling hills of vineyards and the wine flows freely. What could be better than hanging out with a group of brilliant, hilarious women in such a beautiful setting?

“Wine Country” offers all of these engaging comedians—along with brief visits from the great Tina Fey and Cherry Jones—in a comedy inspired by the real-life vacations these ladies have taken together. The “Saturday Night Live” veterans are all longtime friends, connected by comedy, who’ve shared trips like the one depicted here. Dratch’s actual 50th birthday prompted a group jaunt to Napa, so her character’s 50th birthday inspires the on-screen antics. But they’re all playing versions of themselves: Poehler, directing her first feature film and co-starring as the trip’s bossy organizer, has acknowledged that she’s the one who always keeps the others on schedule. Rudolph, who has four kids in real life with longtime partner Paul Thomas Anderson, plays a character who’s happy to have a break from her four kids. Spivey and Liz Cackowski, (who has a brief, amusing role as an uptight sommelier), both former “SNL” writers and members of this crew, wrote the script.

I love the fact that this movie exists, and that it’s a celebration of enduring friendship through ups and downs and across decades without jealousy or competition. I love that it shines a light not only on comedy goddesses but also on female characters as they navigate the realities of reaching middle age. And there are indeed moments of inspired lunacy and daring, raunchy humor. But because the talent amassed here is so impressive, I wish the film had been more focused.

“Wine Country” tends to meander, as a conversation might after a couple glasses of cabernet. While Poehler’s character, Abby, tries to keep her pals on a tight itinerary of activities over the course of a long weekend, the movie itself is almost too loose. It takes detours that don’t always pay off. It features running inside jokes that aren’t all that funny to begin with and can be alienating. And because Poehler obviously has such deep affection for these women both on and off screen, she tends to be overindulgent in allowing certain bits to play too long, such as their impromptu sing-alongs on the winery shuttle bus to songs like Kim Wilde’s “Kids in America” and Bell Biv DeVoe’s “Poison.”

But first, they all have to get to Napa from various places throughout the country. Abby, recently laid off from her job, has put all her newfound free time into planning the best weekend ever—as well as the kind of anxiety that accompanies such high hopes. Dratch’s Rebecca wants everyone to have a good time together and not focus so much on the fact that it’s her big 5-0. Rudolph’s Naomi is just happy to be out of the house and away from suburbia for a little while, but she plans to drink away her fears about a possible medical issue. Gasteyer plays an up-and-coming cooking show star named Catherine who’s reluctant to put down the work phone and fully immerse herself in girlfriend time. Pell’s Val just had knee surgery so she’s feeling frisky and spry, and she’s hoping to meet some interesting, single women while she’s wine tasting. And Spivey, as the pessimistic Jenny, is the complete opposite: She had to be dragged on this trip, even though it promises the possibility of reconnecting with dear friends.

Fey drops in unexpectedly as Tammy, the gruff, widowed owner of the Airbnb who gives them the lay of the land. The character is meant to be a no-nonsense weirdo, but she isn’t drawn well enough to prompt the kind of laughs we’ve come to enjoy from Fey. Along those lines, Jason Schwartzman unexpectedly shows up on the ladies’ first morning as the home’s cook, chauffeur, you name it. He’s essentially a collection of quirks, and the fact that “he comes with the house” is a lukewarm running gag.

“Wine Country” follows these women from one winery to the next with the expectation that their bond will only strengthen as the weekend goes along; naturally, nothing goes as well as they all hope, and as the wine loosens them up, it also lowers their inhibitions and inspires them to express how they really feel about each other. That would have been an intriguing idea if the script had fleshed out the characters more thoroughly. As it is, there’s not much to them, so when the film takes a few dramatic turns, they don’t have the heft or the pull that Poehler was aiming for.

But the movie does go out of its way to stop everything and have the ladies ooh and ahh over self-help guru Brené Brown when they see her at a Calistoga restaurant—because Brown just happens to have a special airing on Netflix, where you can also catch “Wine Country.” Perhaps a nice glass of chilled chardonnay will make the shameless cross-promotion go down a little more smoothly. 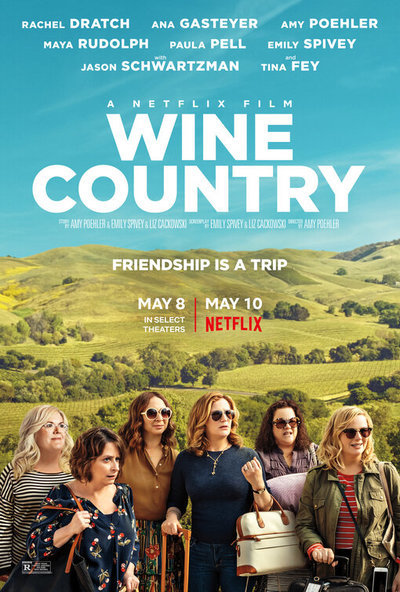