The title of "Wild Indian" is as much of a provocation as the movie itself. Set in the 1980s and the present day, with a prologue set centuries in the past, it's about a couple of Ojibwe boys from a reservation who cover up the murder of a classmate, then carry guilt over their shared participation in that crime into adulthood.

Michael Greyeyes plays the adult version of the killer, Mak'wa, who changes his name to Michael and gets a respectable office job at a white-owned company (Jesse Eisenberg, who coproduced the film, plays his coworker), plus a blond Anglo wife (Kate Bosworth) and a beautiful baby. The grownup incarnation of his co-conspirator, Ted'O, aka Teddo (Chaske Spencer), ends up in prison, then eventually gets out and has trouble finding a job because of his criminal record and facial tattoos. It's only a matter of time before the men's paths cross again. When they do, it feels as if the outwardly assimilated Michael is being haunted by a ghost from his rejected past. Michael is running from the knowledge of what he did—and what, in a larger sense, the crime means for both of them.

"You're running around like a bunch of wild Indians" is what white American parents used to say to their children in previous eras, when neither the school system nor popular culture had made a meaningful attempt to look at the government’s history of genocide, oppression, and broken treaties, then ask which side in that conflict most deserved to be labeled "wild." The central characters in this film are wild in the way that Bigger Thomas in Native Son and Raskolnikov in Crime and Punishment were wild, which is to say that that there are more contributing factors at play than whether the individual can be labeled "good" or "bad," law-abiding or a criminal.

More importantly, this intimate, unrelenting debut feature from Ojibwe writer/director Lyle Mitchell Corbine, Jr. takes the bold step of insisting we treat it as a story of a couple of men who share a terrible secret before we try to frame it as a story that's mainly "about" indigenous cultures. The prologue shows an Ojibwe man who travels out into the wilderness when he becomes infected with plague. Corbine told Salon that this tantalizingly unexplained section of the film was drawn on "stories I heard from my tribe," wherein Ojibwe people would get sick from diseases they caught from white settlers "and they didn't want to infect anyone else, so they wandered upriver. If they got better, then would come back, but a lot of times they didn't come back. They'd disappear upriver."

You could view Mak’wa's reinvention as Michael in the Anglo world as a version of that journey. Ditto Teddo's essentially removing himself from society while in prison. The metaphorical "sickness" is handed down through multiple centuries of marginalization, neglect, enforced poverty, substance abuse, and discrimination. That the young Mak’wa killed a Native classmate who was in a relationship with a blond white girl he was sweet on puts the adult Michael's marriage to a conventionally beautiful blond white woman in a faintly literary light; he’s part Othello and part Shylock, assimilating into a culture that tends to loathe or ignore people like him, nabbing cliched signifiers of "success" as he makes his way through the world.

And yet, despite the positioning of this story within a Native American milieu, the characters stand alone as thorny individuals whose decisions remain mysterious though the last scene. In that sense, "Wild Indian" owes more to a violent, antihero-driven film like "Affliction" or "Taxi Driver" or "Menace II Society" than it does to a so-called "problem picture" that's intended to raise awareness of the plight of a group of people. Culture and history are important to the characters—just as, say, Travis Bickle's war experience, sexual hang-ups, and mental illness are important in understanding him—and they help partly explain why they made bad choices (and why certain traumas were visited upon them and their people, through no fault of their own). But there's a lot going on in this movie beyond explanations, maybe too much for clarity's sake.

This is not a movie that wants to hold your hand and explain what it means. It seems likely that the filmmaker couldn't explain what he means by every choice, because so many of them seem intuitive, from the montage of silent images of young Mak’wa's domestic violence-battered face regarding the future murder victim with his girlfriend, to the final shot of a man contemplating eternity.

The performances, too, keep things close to the vest. Greyeyes plays Michael as a tormented and confused man, but with an arrogant edge that appears to have been the product of emulation (he wasn't like that when he was younger). But the question of whether the character is "likable" is not on the radar of the actor or the filmmaker. Ditto Spencer's performance as the adult Teddo, a decent-souled person who seems to have an instinctive rapport with his sister's boy and is carrying massive guilt and making some terrible decisions. The stars aren't spoon-feeding the viewer information or trying to micromanage our sympathies. They're just playing the roles.

The brief running time, coupled with the economical acting and somewhat elliptical writing and directing, will leave viewers with a lot of questions. But this is  by design. It seems clear that Corbine wanted to make a personal movie, not a history lesson or morality play aimed at hypothetical white viewers, and it's impossible to look at the finished product without feeling that he succeeded. Whatever its merits as a freestanding story, "Wild Indian" should  be regarded as a major work, not just within the context of its director's career, but cinema as a whole. It is not interested in mediating its characters, story, or themes for the benefit of a culture that makes it nearly impossible for films like this to get made. It's a declaration of independence. 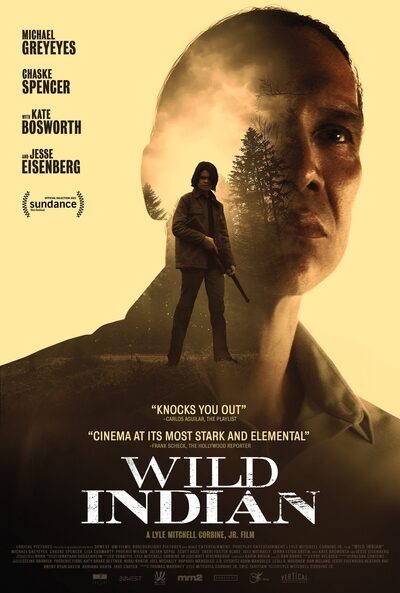