The plot of Anne Fontaine's "White as Snow" is indistinguishable from that of old-school porn flicks that based their scripts on fairy tales because the stories were in the public domain and the jokes wrote themselves. It's a "Snow White and the Seven Dwarves" riff, with solid performances by an eccentric ensemble cast, charming moments of banter, and sex scenes that seem shockingly frank by American standards (they still take their clothes off in France). But it's too slow, disorganized, and muddled to make coherent points, and it keeps having to remind itself that it's based on a fairy tale. It will likely succeed or fail with viewers based on how much they like the heroine, a glorified ingenue who justifies her choices as steps toward empowerment; and the villain, who keeps wresting away our rooting interest because she's played by the great Isabelle Huppert as a dithering weirdo with homicidal tendencies.

Lou de Laâge, the star of Fontaine's 2016 psychological horror film "The Innocents," plays Snow White, but here she's named Claire. The story distractedly gloms itself onto "Cinderella" as well: Claire works at a hotel that used to be owned by her late father but passed into the clutches of her wicked stepmother Maud (Huppert). Maud is so jealous of Claire's youth and beauty that she hires an assassin to kill her, but the attempt is botched and Claire ends up staying in a beautiful house in the woods and being cared for by seven men from the local community. The men are of various ages and body types, but most are upfront about their desire for the heroine (an eighth man in Claire's life is a local priest played by Richard Fréchette, who eventually tries to save Maud's soul as well).

Fontaine has had success making films that play around with various genres, including the picaresque tale starring a fool (represented by three comedies focusing on the character of Augustine Dos Santos); the biographical drama ("Coco Before Chanel"); the postmodern riff on a classic novel ("Gemma Bovery"), and the gothic family horror film ("How I Killed My Father"). This one doesn't really come together, in large part because the heroine doesn't seem to have been fully thought-through by Fontaine and cowriter Pascal Bonitzer in terms of consistent motivation, something a main character needs even in a fairy tale.

In theory, Claire's sexual adventurism is a response to her annoyance at constantly being described as "pure," but the movie never goes deeper. The script makes it feel like Claire is sleeping with various "dwarves" because she can't figure out what else to do with herself, which surely couldn't have the been the point. And despite Claire sometimes carrying on like a newly liberated woman from a sexually explicit, conversation-starting 1970s novel like Fear of Flying ("I didn't know what desire was," Claire says at one point, "but now I do"), the film incidentally validates a lot of ideas that humanity seems to have taken recent baby steps towards growing beyond. For instance, that it's charming for a man to grab or kiss a woman that he desires without her consent, as long as he's an awkward goofball who means well; that a young body is being wasted if it's not having a lot of sex; that older women are innately threatened by younger ones because so much social currency is bound up in looks, and that all of this is the natural order of things. (Maud is constantly checking her appearance in every available reflective surface.)

That's not to say that the film would be somehow "bad" if it expressed these and other retrograde notions in a straightforward way. A salacious reactionary attitude would've been very much in keeping with classic fairy tales. And it might've been fascinating (though maybe also infuriating) for audience members to be put in a position where they have to argue about the film later, and sort out whether it meant to endorse such behaviors or was mostly trying to get a rise out of people, in the manner of a provocateur like Paul Verhoeven (whose psychosexual thriller "Elle" starred Huppert).

The most memorable moments occur when Fontaine and her collaborators appear to let instinct guide their choices, however wild and nonsensical the results. When Maud tries to poison Claire, the sight-gag punchline is straight out of a Mel Brooks film. And when the heroine and her wicked stepmother share a long (and unedited) slow-dance in a club, their unstable emotions seeming to writhe around them and guide their movements, "White as Snow" becomes the cheeky, raunchy, mysterious fable that it clearly wants to be, and that an increasingly puritanical cinema needs. 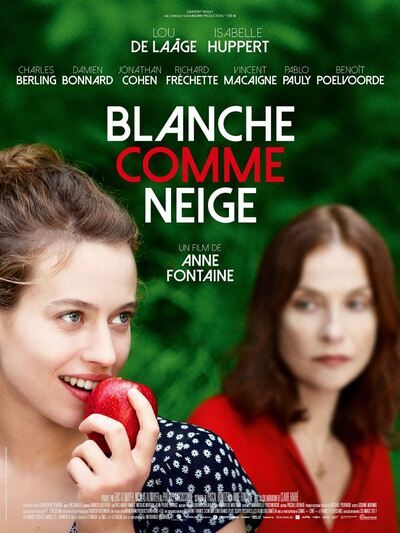 Writer (based on the story of Snow White)