“Gemma Bovery” made me think of “Roxanne,” the fantastic 1987 Steve Martin-Fred Schepisi comic adaptation of Rostand’s “Cyrano de Bergerac.” Both are based on great French tragedies, taking elements from their source and refashioning them. But while Rostand’s masterwork became a comedy in the guise of Martin’s brilliant screenplay, little is done in “Gemma Bovery” to transform Flaubert’s plot. Sure, the events are scrambled, with minor changes here and there, but if you know what happens in “Madame Bovary,” you will not be surprised by this film. In fact, you’ll probably be as irritated as I was by “Gemma Bovery”’s attempts to be clever and meta.

“Gemma Bovery” is actually an adaptation of an adaptation. Posy Simmonds turned Flaubert’s 1856 classic into a graphic novel about British expatriates in the French countryside where Madame Bovary resided. Simmonds is on board here, doing the screenplay with Pascal Bonitzer and director Anne Fontaine. I have not read Simmonds’ work, but I did have “Madame Bovary” crammed down my throat by my high school English teacher. I liked the novel, but thought it was extremely contemptuous of its tragic heroine. My teacher dissuaded me from that interpretation. “Gemma Bovery” made me question if I had been right all along.

While its heroine has far more agency in her choices and her desires than Flaubert’s, she is still punished for them. Like the film’s true main character, Martin Joubert, those familiar with the novel will spend their time mentally checking off items in a list of comparisons. The characters as written and acted are way too flat to inspire much investment. They’re just cogs in a machine that’s trudging very, very slowly to a familiar destination. At least it’s a very pretty machine; the Normandy setting practically begs you to get lost in its beautiful locales.

Since Joubert (veteran French actor Fabrice Luchini) is obsessed with “Madame Bovary” and constantly points out the comparisons between Gemma’s story and Flaubert’s, I’ll need to talk a bit about the book’s details. I suppose 149-year old literature is entitled to a spoiler warning disclaimer and yes, I am indeed rolling my eyes as I write this sentence. So consider yourself warned from here on in.

Charlie and Gemma Bovery (Jason Fleyming and Gemma Arterton, respectively) move to Normandy from London. Their next door neighbor, Joubert, is a bread maker in love with classic literature. Besides the similar-sounding last names, Joubert immediately notices a few other minor parallels between Gemma B. and Emma B.: Both are married to guys named Charles and both were relocated by their husbands to the French countryside. Coincidences happen in life, but Joubert immediately starts imagining himself as some sort of savior for Gemma—he must keep her from Emma’s fate! Mrs. Joubert and their teenage son mock these supposedly preposterous notions, but Joubert can’t help but be a compulsive.

He’s also kind of a pervert, something Fontaine’s camera constantly reminds us. Whenever Joubert runs into Gemma, (which is often as their dogs seem to be on the same pooping schedule), Arterton’s figure is ogled by the camera in ways that would give Michael Bay pause. The director’s camera is an equal opportunity ogler, taking delight in Gemma’s gaze at the butt-nekkid form of Hervé de Bressigny (Niels Schneider), but whenever it takes Joubert’s perspective, it’s icky in a dirty old man kind of way.

As Gemma’s story starts to “merge” with Emma’s story, Joubert becomes more invested and involved in her story. That is, he becomes a stalker who follows her around to see if she’ll have extramarital affairs and to keep her from buying rat poison because it contains arsenic. After all, if Emma’s boredom with country life and her husband led her to affairs, and the same happens to Gemma, then it must also mean that Gemma will follow Emma’s lead and feed that arsenic to herself rather than her rats. Joubert’s nearly violent adamancy about the arsenic should have been enough to make Gemma send him away forever, but she considers him a harmless, necessary friend.

“I am not Emma Bovary!” Gemma eventually tells Joubert, a twist on “Madame Bovary c’est moi,” the famous, possibly apocryphal statement uttered by Flaubert. But the bigger, more intriguing question is: Who does Joubert think he is? As our narrator, and one who later alters Gemma’s story by forcing an outcome from “Madame Bovary” onto Gemma’s narrative, Joubert might consider himself Flaubert. (The names do kind of rhyme, n’est-ce pas?) He keeps telling us details from the novel (the film’s assumption that we know nothing of Bovary’s story is annoying though it is, for most viewers, probably correct), and recites passages from it on occasion.

Regardless of Joubert’s place in this “homage,” “Gemma Bovery” is all construction and snooty winks, no emotion. We really don’t care what happens to Gemma or anybody else, and making matters worse, the opening scene tells you of her fate so there’s no consideration that, like “Roxanne”, “Gemma Bovery” will shake its tragic underpinnings and surprise us.

Arteton is charming and clearly in charge of her character, but she’s not given much to play besides a lusty, bored woman and victim of a male-dominated fate. Fleyming is boring, as his character should be, and Luchini exudes a creepiness the movie is afraid to confront. Outside of the brain-teaser exercise of “match the plot points,” I found little to involve myself at “Gemma Bovery.” And I hope the filmmakers don’t make good on the sequel potential hidden in this film’s last joke.

At the risk of sounding like your high school English teacher (and mine too), avoid the movie and just read the damn book. 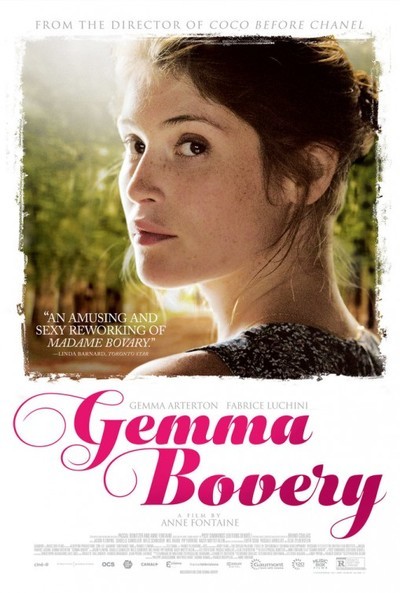 Rated R for sexuality/nudity and language