Noah Baumbach’s latest film, “While We’re Young,” begins with the image of an adorable infant with a sweetly tinkling lullaby version of David Bowie’s “Golden Years” playing in the background. It’s a contrast that perfectly encapsulates the film’s push-pull between the wisdom of age and the optimism of youth, as well as the balance it strikes between zesty ambition and quiet resignation.

Baumbach’s lead characters—a longtime husband and wife played with a natural, lived-in chemistry by Ben Stiller and Naomi Watts—are so vocal about how content they are as childless New Yorkers in their mid-40s that it’s clear they’re protesting too much. And yet, when they strike up an unlikely friendship with a spirited couple in their mid-20s, they can’t help but get sucked into their energetic vortex. As writer and director, Baumbach allows us to enjoy the silliness of the older couple’s newfound lust for life, whether it manifests itself in a trendy fedora or a hip-hop dance class. But since he’s the same age as Stiller and Watts’ characters, he’s also decent to them in their awkward fumblings. He is them, and they are us.

At the same time, he offers a biting yet affectionate skewering of Brooklyn hipster culture through the characters of Adam Driver and Amanda Seyfried, both for its ridiculousness and ubiquity as well as for the way it makes the rest of us feel impossibly old. The details are delightfully dead-on. These are people who make artisanal ice cream, ride bicycles everywhere, play board games and only listen to music on vinyl. (That golden oldie “All Night Long” by Lionel Richie is among their favorites.) But there’s a catch: While Driver and Seyfried and their friends are actively retro, they also possess a generational entitlement—an expectation that they should have whatever they want, and have it now, without having to work too hard to get it.

Stiller’s Josh, by comparison, has worked way too hard over the past decade on a dense and overlong documentary about intellectualism and power and some such; I won’t even bother trying to explain it to you because watching Josh try to explain it is amusing enough. His wife, Cornelia, is a smart and seasoned producer whose father (an underused Charles Grodin) is a pioneer of the genre along the lines of a Maysles or a Pennebaker. Josh yearns for such greatness and esteem, but it has eluded him. The character is a perfect fit for Stiller’s patented mix of restlessness and self-deprecation; more so than the one he played in Baumbach’s more dramatic “Greenberg.”

Yet Josh feels rejuvenated when Driver’s character, the wide-eyed and warmhearted Jamie, shows up to audit the college class he teaches and fawns all over him. An aspiring documentarian himself, he quickly becomes Josh’s new BFF; meanwhile, Jamie’s wife and constant companion, Seyfried’s foul-mouthed Darby, befriends Cornelia and impresses her with an effortless cool. Through zippy and well-crafted use of montage and production design, Baumbach beautifully reveals the contrasts in these two couples’ lives.

There are traces of Woody Allen at work here as “While We’re Young” vividly makes fun of a specific subculture of hyper-articulate New York denizen, as well as the way its characters try to stave off the malaise of aging by clinging to characters who radiate the exotic promise of youth. But it also takes a clear-eyed look at the narcissism that can result from settling into a smug life of parenthood and domesticity, as evidenced by Josh and Cornelia’s former BFFs, played sharply by Maria Dizzia and Adam Horovitz. (Better known as Ad-Rock of the Beastie Boys, Horovitz is great in this—a total natural and a surprising source of a calm and stability in a film full of flux.)

But “While We’re Young” takes a turn in the third act as it grapples with some ethical dilemmas, and it doesn’t quite work. It becomes angrier and heavier as Josh uses his inquisitive nature to unearth some dark truths—both about himself and his new friends. It feels like a totally different movie as it reaches its very public climax, and an inferior one.

Many Baumbach movies feature brilliant but immature people doing terrible things to each other (“The Squid and the Whale”, “Margot at the Wedding”) and “While We’re Young” is no exception. The observant and mocking humor that makes the film’s first two-thirds so breezy and enjoyable gives way to shattering realizations, but Baumbach ultimately tempers that instinct somewhat by exhibiting genuine sympathy for Stiller’s character.

“While We’re Young” searches for the blurry line we all cross once we’ve entered middle age, finds it and tramples all over it, but it does so with kindness for those of us who’ve made that inevitable journey and survived with some dignity intact. 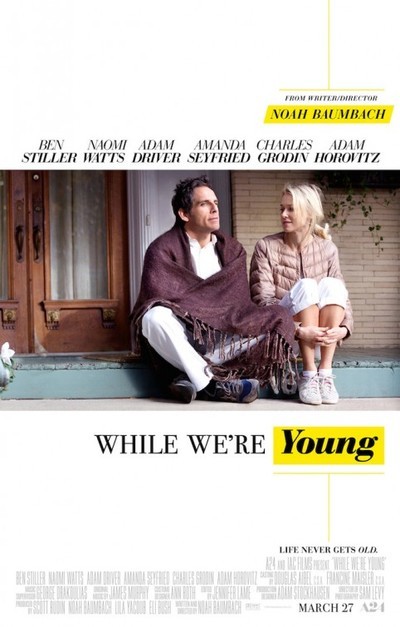