Wheel of Fortune and Fantasy

Like his other New York Film Festival selection, “Drive My Car,” Ryûsuke Hamaguchi’s anthology, “Wheel of Fortune and Fantasy” covers themes of love and betrayal while twisting the narrative in unexpected directions. Broken into three segments related solely by their penchant for role-playing characters, the film takes just over two hours to immerse us in the lives of several women in Japan. Each story ends with a short credits sequence to ensure we don’t waste any time trying to tie characters together. As with any anthology series, some parts work better than others. But even when the quality dips slightly, we remain consistently intrigued. All three tales are full of complexities that evade simple characterizations and summations.

Each episode has a clever title that warrants introspection once the story ends. The first of the three, “Magic (Or Something Less Assuring),” opens with an engrossing taxi ride shared by best friends Meiko (Furukawa Kotone) and Tsugumi (Hyunri). Hamaguchi lets the ride unfold at a leisurely pace—it seems that cab is driving around forever—but the conversation is so good we don’t want it to end. Tsugumi is gushing to her girlfriend about the man she’d gone on a date with the night before. As the giddy details spill, Meiko feels an uncomfortable sense of familiarity—is it possible Tsugumi is talking about her ex-boyfriend, Kazuaki (Nakajima Ayumu)? Meiko pays a visit to him and discovers that he is indeed the man who charmed her best friend.

However, Kazuaki wasn’t so truthful in describing his prior relationship to Tsugumi, which leads Meiko to a brutal series of corrections, each of which Kazuaki disputes. Hearing about your own break-up through the other person’s interpretation is a jarring concept, and Hamaguchi’s script milks the often terrifying back and forth argument over the truth for maximum effect. Kotone has a very hard role to play here, she’s part avenging angel, part wounded and guilty former lover, and without the strong writing, Meiko would have come off merely as a scorned woman tormenting her ex. She toys with Kazuaki’s feelings, but she also lays out her own grievances about the relationship and what led her to cheat on him. Our allegiance swings between Meiko and Kazuaki as the tension mounts. The suspense heightens when the three of them accidentally wind up in the same restaurant. Will Meiko pretend she doesn’t know her ex-lover, or will she blow up the situation and make collateral damage of Tsugumi?

The second episode, “Door Wide Open,” features an older woman, Nao (Mori Katsuki) involved in an affair with a younger college student, Sasaki (Kai Shouma). Sasaki is first seen begging his teacher Segawa (Shibukawa Kiyohiko) not to fail him. Segawa is unmoved, costing Sasaki several future opportunities. As revenge, he convinces Nao to lure Segawa into “a honeytrap” then expose him, thereby ruining the newfound fame Segawa has obtained from his hit novel. This won’t be as easy as either of them thinks, as the professor is very adamant about leaving his door open so that no one can assume anything untoward is happening in his office.

Nao tells Sasaki about the profound effect a specific chapter of Segawa’s book had on her. It’s what she will use in her plan to lure the unsuspecting professor into her erotic trap. Hamaguchi lets us hear this entire section of the book, a torrent of delicious filth read in a tour-de-force performance by Katsuki. She’s especially good in the moments when she must temper her performance due to that open office door. Segawa is turned on, but not the way either we or Nao expect. What follows is a fascinating verbal dance between the two actors. The story culminates in two ironic twists that make this the most intriguing tale.

The final episode, “Once Again,” also has a twist I won’t reveal, except to say it results in a very poignant and touching exploration of its characters’ pasts. The story of two classmates, Nana (Kawai Aoba) and Moka (Urabe Fusako), who reunite after a high school reunion, “Once Again” starts out as an exploration of one set of memories only to bend toward a newer, perhaps manufactured series of events. Each woman is aware of the ruse they are engaging in, opting to be as creative as possible in service to a purely therapeutic, cathartic outcome. Hamaguchi uses a train station as both the meeting and the departing points for his characters, evoking the emotion-filled way this location had been used in many an old Hollywood melodrama. Aoba and Fusako are very good, each taking the lead for half of the vignette, manufacturing fictions far happier than the truth may be.

“Wheel of Fortune and Fantasy” is a love letter to the art of spinning a good yarn, but it’s also a sharply observed paean to the lies and truths we tell ourselves so that we may function from day to day. Hamaguchi leaves each tale somewhat open-ended, giving the illusion that these lives will continue after our attention has been diverted to the next narrative. A week after I saw this movie, I was still thinking about its characters.

This review was filed in conjunction with the NYFF premiere. The film opens in limited release on October 15th. 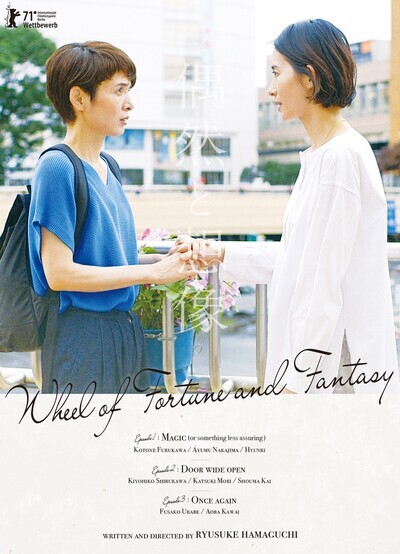