“Whatever” is a movie that knows how a lot of kids survive the teenage years through sheer blind luck. Others die or have their lives destroyed because their luck is bad. Most people, I imagine, keep teenage secrets that still make them cringe years later--memories of stupid chances they shouldn't have taken, and relief that they weren't caught.

Anna, the heroine of “Whatever,” is not a bad girl but she is an unhappy one, and she drifts into danger without even giving it much thought. Isn't it amazing how everything a girl has been taught all her life sometimes means nothing in the face of temptation by a boy who is reckless and stupid, but seems to offer freedom? It's the early 1980s. Anna (Liza Weil) attends high school in New Jersey. Her best friend, Brenda (Chad Morgan), values herself so lightly that she has sex with guys just to get her hands on their jugs of wine. Anna is taking art classes and hopes to be accepted by Cooper Union, a good school in Manhattan. Her teacher (Frederic Forrest), an aging hippie in a time warp, urges her to do her thing. Anna lives with her mother (Kathryn Rossiter) and unpleasant younger brother; they often prepare their own meals while their mother is out on dates with a married man she hopes will pay their bills.

Anna is smart, but not a good student. She's not into booze and sex the way her friend Brenda is, but she figures, without giving it much thought, that these are areas where she might as well do some experimenting. She has a crush on a kid named Martin (Marc Riffon), who has been out of town but now returns from his self-styled wanderings, with lessons about “the passion of one's existence.” A lot of the time Anna spends doing nothing, while listening to music.

The movie unfolds episodically. Brenda suggests cutting school and taking a trip to New York. Anna visits Cooper Union but doesn't really connect. They pick up a couple of 25-year-olds in a bar. They pretend to be older than they are. Something embarrassing happens that will turn into a funny story many years from now, when the confusion and pain have been outgrown.

Back in New Jersey, there are a couple of guys hanging around who have already done time in a reformatory, and are low-level would-be drug dealers who suggest a trip to Florida. Brenda wants to go. Anna agrees passively. This trip could produce the turning point in her life; it could result in trouble that would last for years. The way it turns out, and the subtle way those scenes are written and acted, give us a glimpse inside the character of one of the guys--who has probably already taken the wrong turn himself, but still has his feelings.

The movie was written and directed by Susan Skoog, who accepts a difficult challenge by making Anna neither a rebel nor an endangered good girl, but simply an average person whose potential, if any, is still wrapped up inside adolescent confusion and resentment. She's at a stage. She doesn't express herself very well, and often clams up, and the counselor at high school is exasperated because she seems to be drifting into trouble without much meaning to. She gets into trouble for smoking in the school restroom, and we sense she doesn't even care if she smokes or not--she just thinks she ought to.

Movies like this depend on observation. Yes, there's some plot, especially when Brenda seizes an occasion to strike back at the stepfather who has abused her. But it's significant that Brenda takes action, not Anna--who usually has no particular action in mind. She's along for the ride. Doesn't care how, doesn't know where. The suspense involves whether she'll avoid trouble long enough to grow out of the stage where she allows herself to drift into it. Seeing a movie like this could do a lot of kids some good. Parents, I suspect, would find it terrifying. 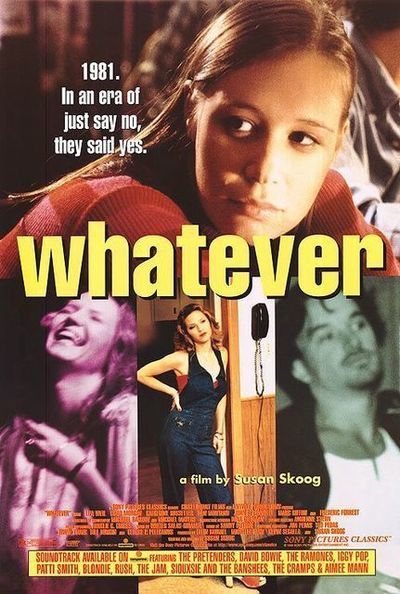 Rated R For Pervasive Teen Drug and Alcohol Use, Language Including Sexual Dialogue, Sexuality and Some Violence