These are hyper-sensitive times. One wrongly worded tweet about an issue such as mental illness can unleash a torrent of social-media tongue lashings within seconds of posting.

Therefore, I must salute the efforts of director Shira Piven, who somehow manages to walk the fine line between mawkish and mocking with “Welcome to Me,” a humorous if occasionally horrific pitch-black satire about an unstable lottery winner from Palm Desert, Calif., who goes off her meds and invests her $86 million jackpot into a vanity talk show. Her one and only topic? Herself.

“Network,” “The King of Comedy,” “Being There,” “The Truman Show” and its cousin “EDtv”—“Welcome to Me” owes a debt to each and every one as it comments on the skewed state of celebrity and the ongoing popularity of reality shows. But those films arrived long before validating every living moment with a selfie became a national pastime and YouTube was deemed a legit outlet to discover fresh talent. Now everyone is their own brand.

What those films lacked, however, was a woman protagonist—an essential ingredient in “Welcome to Me,” with its distinctly feminine style of inward reflection and lashing out. Much early praise has been focused on its star, Kristen Wiig, who has always leaned towards the funny strange rather than the funny ha-ha side of comedy as exhibited by such “Saturday Night Live” alter egos as malevolent grade-school imp Gilly and baby-handed Lawrence Welk singer Dooneese. Since moving onto the big screen, however, she has added a nuanced dramatic edge to her skill set that finds her digging deeper inside the damaged psyches of her characters.

Wiig impressed when she headed an all-female ensemble as a sad-sack maid of honor in “Bridemaids” and paired with fellow SNL alum Bill Hader as suicidal siblings in “The Skeleton Twins.” But “Welcome to Me” basically lives and dies by her performance, and, luckily, her Alice Klieg is a carefully and cunningly crafted creation, which exposes an undercurrent of pain and sorrow beneath her often placid, pixilated state. She is like Blanche DuBois crossed with Amy Adams’ cartoon princess come to life in “Enchanted,” a depressed half-aware naïf who doesn’t know the meaning of TMI and only cares about her own pain.

This Oprah-idolizing social misfit festooned with quirks (she likes to preface her remarks by announcing, “I have a prepared statement,” before hauling out a sheet of paper) and kinks (she wears a fanny pack, binges on string cheese, wears multi-hued bobby socks and keeps her TV on constantly even when she isn’t home) decides to use her sudden windfall to pay people to indulge her every whim no matter how bonkers they might be. Money, as they say, can’t buy happiness but it can grant your wish to make a grand entrance on TV in a swan boat while stiffly waving your arms like a demented Vanna White.

But one must give a goodly chunk of credit to the director (as well as to screenwriter Eliot Laurence) for allowing us to be amused by Alice’s ridiculously watchable self-actualizing journey in the public eye as well as being appalled by it. Certainly, Piven does a better job milking chuckles out of a touchy subject than filmmaker husband Adam McKay and producing partner Will Ferrell—both part of the team behind “Welcome to Me”—when they tackled prison rape in the recent “Get Hard.”

One of the wisest choices Piven made is to hire serious actors, not a gang of comedians, to support Wiig and stabilize the subject matter. Alice essentially provides all the loony tunes antics we need. While some fine performers like Jennifer Jason Leigh get lost in the shuffle, others manage to stand out: Tim Robbins as Alice’s long-suffering if naggy pill-pushing shrink; Linda Cardellini as her one and only friend; Wes Bentley as the on-air infomercial spokesman whose company produces Alice’s show and who becomes her lover; and James Marsden as his opportunistic brother who serves as the film’s Faye Dunaway counterpart as he encourages Alice’s crackpot decisions no matter the consequences.

Leave it to Joan Cusack—has she ever been less than terrific?—to be the one person to be able to divert our attention from Wiig as the show’s disgusted director who nevertheless occasionally engages in a lively on-air back and forth with Alice as a kind of unseen God-like persona from beyond.

Somehow it makes sense that Piven, who coached her then-2-year-old daughter Pearl on the art of berating Ferrell in “The Landlord,” the viral short that became an Internet sensation and put Daddy’s comedy website Funny or Die on the map back in 2007, should be behind “Welcome to Me.” Alice is essentially playing “let’s pretend” as she slowly consumes a cake on camera made of meat loaf and frosted with potatoes (part of her regimen of regulating her moods with a high protein lifestyle), does a segment titled “Smelling Things Before They Happen” and stages re-enactments of wrongs done to her at the hands of other women from her past.

Of course, Alice becomes a late-night sensation, complete with a besotted grad-school fan who wants to do term papers on her comparing her art to Cindy Sherman. Naturally, she will have a massive public meltdown around the time she decides to neuter dogs live on camera. As for her illness, we never do get a real handle on the extent of Alice’s problem—the better to give us permission to laugh. And, eventually, the film will strike one of its lone false notes by delivering a happy ending instead of a satisfying one. 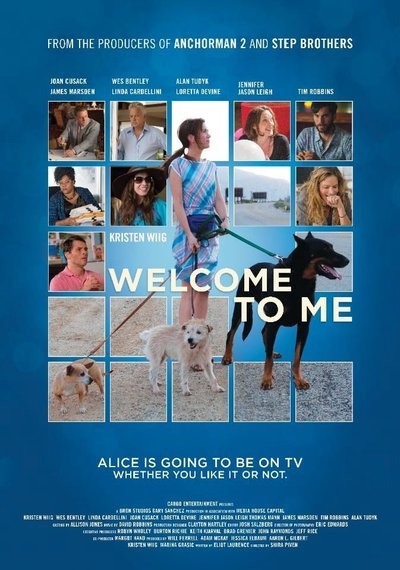