If you love rape jokes, "Get Hard" is your movie.

This film about a car wash manager, Darnell (Kevin Hart), helping a convicted hedge fund manager prepare for a stint in maximum security prison is driven by fear of non-consensual buggery, mostly at the hands of looming African-American prisoners with deep voices. At its core, the story is about a wimpy White man's fear of being owned and "turned out" by Black men—treated as a "bitch," to use a word both characters employ pretty much constantly. The script has the hedge fund manager "training" for prison by bulking up, and learning to carry himself with more confidence, and fight, and talk "black." None of this will be a surprise to anyone who's seen the subway and bus poster, which shows the hedge fund manager, James, seated, his face frozen in a not-so-secretly terrified fake scowl, while the car wash owner Darnell stands behind him, braiding his hair into cornrows.

Before we go further, let the record reflect that nothing about this material is inherently unacceptable. To quote the title of a Steve Martin album, comedy isn't pretty. Few things are more antithetical to the idea of art—not to mention more unfunny and boring—than a comedy that's mainly concerned with proving how sensitive it is. Comedy can work in a lot of different modes and be funny, provocative, even brilliantly incisive. One of those modes is "tear the lid off the id and watch the razor-toothed fishies swim around."

That happens to be the mode that great R-rated comedies like "Blazing Saddles," "Stir Crazy," "Office Space," "Friday," Roberto Benigni's "Monster," and the similar but vastly superior "Let's Go to Prison" all worked in. ("Would you like some Merlot?" Chi McBride's inmate asks his "Let's Go to Prison" lover. "I made it in the toilet.") This is the mode that "Get Hard" tries to work in, too. The film isn't set in an ideal world, but an exaggerated version of the world we're actually stuck with. This world is racist, homophobic, sexist, and a whole lot of other -ics and -ists. It's also driven by an urge for alpha male dominance, expressed through economic violence as well as prison rape. Somewhere in the "Get Hard" screenplay is a terrific if troubling germ of an idea: a rich, crooked white man is terrified that members of the American underclass will literally rape him, as his pals have been economically raping them for generations.

It's all fair game for Cohen. Too bad his skills are lacking. The first-time director's resume includes co-writing Ben Stiller's "Tropic Thunder," which wrung laughs from a white actor (Robert Downey, Jr.) in blackface, a Gentile actor (Tom Cruise) playing an outrageously greedy and grotesque Jewish agent, and a monologue about how Hollywood movie stars play characters with Down syndrome to prove their versatility ("never go full retard"). "Thunder" suffered from the "Get Hard" problem of trying to have its politically incorrect cake and eat it, too: Downey's and Cruise's characters were minstrel show doodles enclosed by air quotes. But it had moments of scathing insight, and it never entirely forgot that its main target of opportunity was the entitled cluelessness of Hollywood's elite. Cohen casts the "Get Hard" panic net wide enough to include Mexican-American gangbangers and white supremacists (showcased in a set-piece that seems modeled on the classic bit in "48 HRS" where Eddie Murphy intimidates a bar full of rednecks). And its distaste for the rich swells has a peculiar but appealing kind of outdated Bowery Boys populism: James's people aren't just wealthy, they're movie-wealthy, hanging out on yachts and golf courses and in the dining rooms of country clubs, and attending banquets where string quartets are interrupted by champagne toasts.

Unfortunately, "Get Hard" rarely rises to the level of "Tropic Thunder"'s better bits. Much of it plays as though a filmmaker who grew up watching "Stir Crazy" on HBO thought the scene where Richard Pryor taught Gene Wilder to walk and talk Black would be better if it lasted 90 minutes instead of 90 seconds. The film's not as clever as it seems to think it is. Certainly it's not clever enough to handle provocative, even explosive material without seeming cynical and opportunistic. It's a reactionary film posing as a provocative but basically liberal one. A lot of the time it acts as though it's boldly seeing through mindsets that it is actually just unveiling for the zillionth time. It wants us to think it's critiquing racism and cultural stereotypes, but that's mainly a pose—a pretext to get laughs from Will Ferrell dressed in "street" clothes, babbling barely coherent slang, and apologetically insisting "I'm not trying to appropriate your culture." (Few entertainment trends are as obnoxious as white "liberal" comedians being "ironically" bigoted, while tacitly telling audiences, "We all know nobody in this room is racist, so laugh it up!")

The film is also casually homophobic: at one point, Darnell gives up on teaching James to act tough and brings him to "the number one gay pickup spot" in Los Angeles so that he can learn to perform fellatio in the men's room. And it's misogynist, too. James's fiancee, played by Alison Brie of "Community," is a castrating harpy, and her counterpart on the underclass side of the fence, a young groupie who hangs with a street gang, fares no better—though at least Darnell's wife Rita (Edwina Findley) and daughter Makayla (Ariana Neal) come across as human beings rather than hateful parasites in their limited screen time.

Ferrell and Hart have their moments: the former once again displays his gift for surreal, improvised blurting, and the scene where Hart acts out a hypothetical encounter between a Black inmate, a Latino inmate and a gay hustler in a prison yard is Pryor-level great. But such moments are oases in a tedious whole, and none of them can dispel the feeling that "Get Hard" is trying to put one over on its audience and getting away with it. 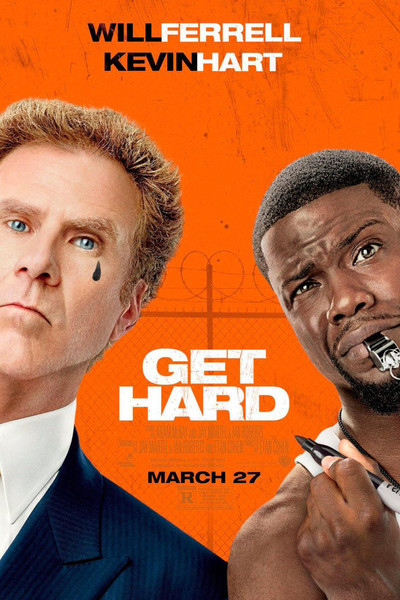 Rated R for pervasive crude and sexual content and language, some graphic nudity, and drug material

Will Ferrell as James King