The Israeli film “Wedding Doll,” written and directed by Nitzan Gilady, has an unusual amount of pictorial beauty, both of the harsh and soft varieties. The harshness, or at least starkness, is provided by the Negev Desert, around which the movie is set. Its golden planes and imposing promontories are spectacular and a bit intimidating. The soft beauty is provided by the film’s lead actress, the brightly open-faced Moran Rosenblatt, who plays Hagit, a mentally disabled young woman who has an uncanny talent: she crafts lovely little dolls using toilet paper and the rolls it comes on as her main material.

Hagit has a job at the small factory that manufactures said household staple, and the place isn’t doing so well. The owner wants to shut it down, but his ambitious son Omri (Roy Assaf) wants to innovate; either way, she’ll be out of a job. To forestall this, Hagit has her mom Sara (Assi Levy) drive her to a gown shop, where she hopes to work as a seamstress. Her halting speech and awkward manner mean she’s going to get the high hat, and she gets a variation on that quite a bit, even from a school kid who bounces a soccer ball at her and calls her “weirdo.”

It’s worse than that: Hagit and her mom are estranged from other members of the family, including Hagit’s brother, whose infant child was once almost accidentally dropped by his sister. Omri is carrying on with Hagit a bit behind everybody’s back, insisting that he keep their relationship secret (Omri is also less than truthful to his buddies, who make a fine trio of narrow-minded small town vitelloni to be sure). Hagit is convinced that she’s on the fast track to marriage with Omri whether the factory closes or not.

Oy. As much intriguing local detail and sharp characterization writer/director Gilady brings to bear on this concise tale, the tale itself depicts the beautiful and often uncomprehending Hagit getting let down over and over again. It’s heartbreaking. I understand that the viewer is meant to be won over, and possibly inspired, by the character’s resilience. And while the movie’s disinclination to give Hagit any kind of break, fairy-tale or otherwise, speaks well of its commitment to a kind of realism, the depiction of provincial bigotry against differently-abled folk is, while likely accurate, also just plain depressing. The integrity of the filmmaking and the luminosity of Rosenblatt’s performance are undeniable. And I suppose the fact that I was affected as I was by “Wedding Doll” is testimony to its emotional effectiveness. But while Hagit is able to crack a smile at the movie’s end, I feel a pall wrapping around me every time I contemplate her predicament, or the predicament of her real-life models. 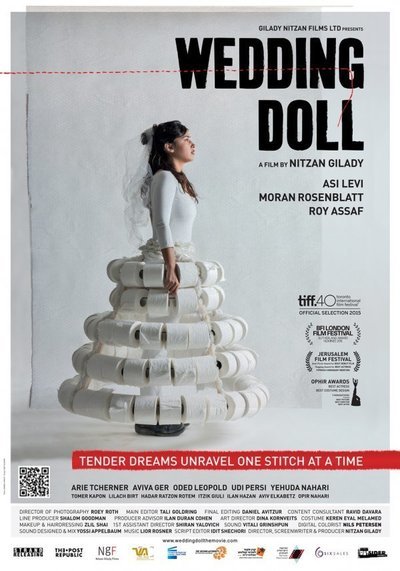