I can see why some animation fans revere writer/director Makoto Shinkai (“5 Centimeters Per Second,” “Garden of Words”) as the next big thing in Japanese animation. Shinkai’s 2016 body-swap fantasy “Your Name” was understandably his big international breakthrough: a cheery, engrossing, and, best of all, representative work that shows his knack for drawing viewers into the emotional life of his teenage protagonists. “Weathering With You,” Shinkai’s latest animated romantic-fantasy to be released in America, has the same spark of ingenuity and consistency of vision as his earlier work. Which is especially impressive, given that “Weathering With You” feels much bigger conceptually—two poor, but optimistic runaways fall in love while trying to stop a monsoon-like rainstorm in Tokyo using her supernatural, cloud-dispelling “sun girl” energy—than it does on a narrative level.

I didn’t care much about how plucky high school dropout Hodaka (Kotaro Daigo) and his mysterious love interest Hina (Nana Mori) ultimately get together, but I enjoyed following them while they figured things out for themselves. You might also want to follow Shinkai and his animators given how vivid their conception of Hodaka and Hina’s lonely, but romantic world is. Shinkai’s brand of peppy magical realism is attractive, and “Weathering With You” is a perfect entry point for animation fans who are still looking for the next big Pixar or Hayao Miyazaki.

Hodaka and Hina’s richly detailed environment is also probably the thing you’ll remember most about “Weathering With You,” a compelling fantasy with a generic conclusion. Most of movie’s story is told from Hodaka’s point-of-view, which gives Shinkai’s latest a familiar trajectory: boy flees from home without a plan, quickly runs out of money, looks for shelter, makes new friends, evades the cops (and child protection services), and falls in love. Still, it’s refreshing to see Hodaka’s world isn’t just a reflection of his mood: the overcast sky and constant rain that overwhelm Shinkai’s Tokyo also reflects a world over-run by blank-faced adults who mark time before they’re allowed to go home and avoid the outside world.

Hodaka has to do some work on himself and his self-image in order to overcome the city’s general indifference. Falling in love and supporting Hina is part of that journey, though it’s not the most important part until midway through the film. Before then: Hodaka’s relationships are defined by how little money and therefore status he has. Even Keisuke Suga (Shun Oguri), a penny-pinching clickbait journalist and the first friend that Hodaka makes in Tokyo, immediately exploits Hodaka’s kindness: Keisuke shamelessly accepts a full meal from Hodaka after he saves Hodaka from falling overboard (they’re both traveling to Tokyo on a ferry). Hodaka also makes far less pay than he deserves after he goes to work for Keisuke’s tabloid-style website, though Keisuke at least offers him food and shelter.

Hodaka has to sell out a little at this early stage in his adult life, but he doesn’t have to like it. He mostly does, though, and it’s to Shinkai’s credit that we can see why. Hodaka’s constant fears—of being arrested for vagrancy or too broke to support himself—are gently (but constantly) undercut by the re-assuring sounds of subway trains softly passing over elevated tracks, commuters splashing through slow-rippling puddles, and even a paper coffee cup as it’s gently set down on a McDonald's counter. This is Hodaka’s new home, and it’s generally more reassuring than it is alienating.

Hodaka’s love for Tokyo predictably only grows once he finds Hina, though it’s a little annoying to see them meet-cute outside of an unsavory nightclub that he naturally tries to save her from working at. Hina soon shows Hodaka that she can take care of herself and then some. It’s also annoying to see her primarily used as a mirror to reflect his anxieties and hopes for the future. Hina has the supernatural ability to temporarily stop a Biblical rain from sinking Tokyo, if only for a couple of hours. But somehow, she’s his foil? That aspect of “Weathering With You” is disappointing; Shinkai also doesn’t seem to care that Hodaka is basically using Hina’s powers for financial gain in the same way that Keisuke takes advantage of his eagerness to please.

But again, Shinkai and his collaborators’ ability to accentuate the positive is what makes “Weathering With You” mostly satisfying. His characteristically graceful use of computer-generated graphics to give already beautiful images more contouring and depth of field is one of many ways that he draws viewers into Hodaka’s world. It’s to Shinkai’s great credit that Hodaka’s story seems real enough while you’re experiencing it with him. “Weathering With You” may not surpass “Your Name,” but it is an exciting confirmation of Shinkai’s storytelling gifts. 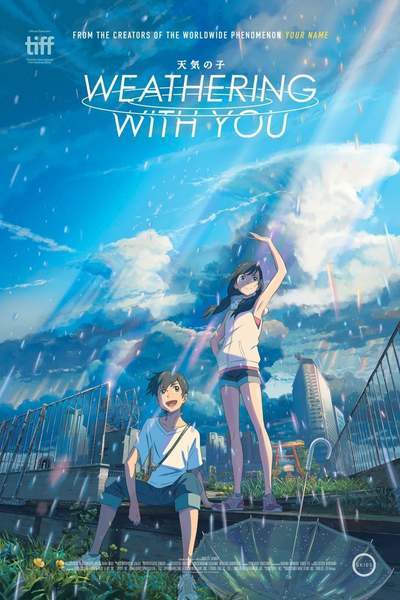