“I feel like I’m always searching for something, someone.” Haven’t we all felt that at some point in our lives? A sense of displacement from our daily lives, and a search for something that would anchor us to a more commonly perceived sense of normalcy? The Japanese phenomenon “Your Name” (it was the highest grossing film of last year in the country and the highest grossing anime film of all time worldwide, passing "Spirited Away") is about this highly relatable sense of looking for something, someone, someplace. And so much more. It’s a beautiful, captivating piece of work that gets off to kind of a rocky start but achieves remarkable momentum toward an emotional, powerful ending. And you won’t see a better-looking animated film all year.

Writer/director Makoto Shinkai takes what could have been a very cheesy “Freaky Friday”-esque concept and imbues it with melancholy and honesty. The set-up is relatively simple: Mitsuha (Mone Kamishiraishi) is a high school-age girl who lives in the fictional Itomori, a gorgeous, quaint village in the Hida region of Japan; Taki (Ryunosuke Kamiki) is a slightly older boy living in Tokyo. They are both average kids with their own social circles, but they have no actual connection, and lead very different lives, at least partially defined by their equally gorgeous settings of city vs. country.

One day, Taki wakes up and looks down to see breasts. He’s in Mitsuha’s body. The next day, Mitsuha wakes up back in her own form but with only vague memories of the day before. And, of course, the same thing happens in reverse. Mostly through discussions with people around them about how weird they were acting, Mitsuha and Taki figure out that they’re switching places randomly, only after sleep. Rather than get into wacky hijinks like an ‘80s Disney movie, they work to help each other, leaving each other notes and diaries about what happened when they switched places. For example, Mitsuha has the courage to talk to the girl Taki likes, serving as a sort of body-switching Cyrano de Bergerac. But one day, they stop switching, and Taki can’t get a hold of Mitsuha in any way. He has vague memories of vistas from Mitsuha’s life and he sets out to try to find her. This is when “Your Name” becomes something very unexpected.

To say that “Your Name” is visually striking would be a giant understatement. Shinkai and his team have both an eye for detail and a poetic vision. The settings of “Your Name” somehow feel both lived-in and magical at the same time. Whether it’s the train system in Tokyo, its gorgeous skyscrapers touching the sky, a never-ending horizon in Itomori, or even just a series of streets on a mountainside, “Your Name” is one of those animated films in which one could pick any still frame from it and hang it on their wall. And yet the gorgeous visuals of the film never stifle the storytelling; they’re intertwined with one another. “Your Name” seems to often be saying: city or country, it’s a beautiful world out there and we only need to find our place in it.

Shinkai avoids so many potential narrative pitfalls (that it feels like the inevitable live-action remake will tumble into willingly). For one, Mitsuha and Taki maintain gender differences without feeling clichéd in the boy vs. girl way that Hollywood films so often define. We feel like these two very different people find commonality in gender and class without losing their personalities at the same time. The movie reminded me at times of Roger’s famous quote about empathy, about how film has a gift to put us in someone else’s shoes in ways that nothing else does. Mitsuha and Taki would likely never interact in the real world, but they start to become supportive of each other, and essential to each other’s happiness. The idea that someone you’ve never met and would never otherwise interact with has the same needs, joys, and fears as you is something worth remembering in 2017. It reminded me of “Arrival” in the way that film takes an out-of-this-world concept and then ties it to issues with which we can all relate.

Most of all, “Your Name” balances fantastic beauty and grounded reality in ways that are simply impossible outside of animation. Shinkai alternates between detailed visions of Tokyo that feel like they were constructed from real location photos and fantastical images of places that don’t exist in the real world, and never skews that balance too far to either side. It becomes more and more impressive. Few animated films in recent memory have built scene upon scene to such a rewarding final shot. Few animated films in recent memory are this good. 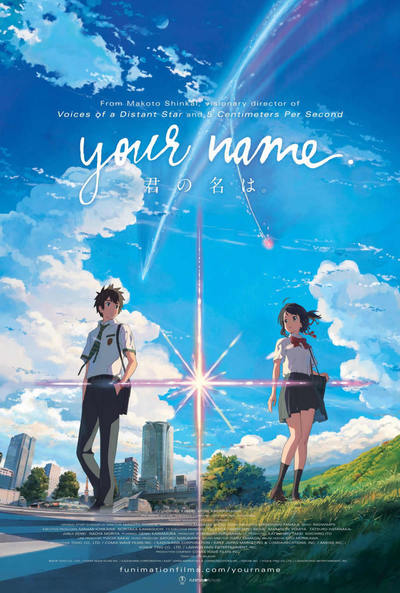 Writer (based on his novel)