If you watch "We Die Young"—the new coming-of-age/gangster drama hybrid—it'll probably be because Jean-Claude Van Damme is the film's headlining star. Sadly, Van Damme, the rare '80s action star who has (in recent years) given some thought to how he can age gracefully on-screen, is not in "We Die Young" a lot. Granted, a bigger role might not have improved Van Damme's enjoyably twitchy performance as the mute, Oxycontin-addicted ex-marine Daniel. But Daniel is the most compelling part of "We Die Young," a familiar story about reluctant teenage gang member Lucas (Elijah Rodriguez) and his seemingly impossible quest to break away from Mara Salvatrucha (aka: MS-13), a gang of Central American criminals who, in real life, have been associated with drug-running and child prostitution. Lucas' story is also sometimes believable thanks to a strong performance by David Castañeda, who plays the brutal MS-13 gang leader Rincon. But Castañeda and Van Damme's scene-stealing performances don't significantly improve writer/director Lior Geller's frequent reliance on racial stereotypes and gangster movie cliches.

You can tell that Geller doesn't really care about his characters beyond a point just by watching his movie's sensationalistic opening scene: Lucas (14 years old) gives viewers an unsettling tour of his corner of Washington D.C., one that concludes with Rincon quoting Shakespeare's Shylock—a very selective reading of his famous "If you prick us, do we not bleed" speech—right before he encourages his minions to beat a random debtor to a bloody pulp. Lucas casually mentions (through voiceover narration) that his neighborhood is just a 20-minute bike ride away from the White House, an otherwise unrelated factoid that gives "We Die Young" a superficial kind of political relevance.

After this introductory scene, "We Die Young" is a mostly by-the-numbers crime melodrama in the vein of "A Bronx Tale" or "American Me." Lucas juggles several responsibilities, all of which inevitably come to a head at the wedding of Gabriela (Robyn Cara), Rincon's handicapped sister. First: Lucas delivers pain-killers to Daniel, who broods silently in his auto body shop whenever he's not flirting with under-developed love interest Anna (Joana Metrass) or flashing back to his traumatizing tour of Afghanistan. Then: Lucas tries to stop his impressionable 10 year-old brother from joining MS-13. Finally: Lucas goes on a special/dangerous mission for Rincon, who wants to make a deal with an (apparently) more dangerous El Salvadorian drug cartel—even though Rincon's chapter of MS-13 is under FBI surveillance.

This leaves Van Damme in the unusual position of playing a tragic supporting role. That's not necessarily a bad thing since Van Damme has often tried, with mixed results, to prove that he's more than just an admirably limber set of gams (Most mugging: "Enemies Closer"; Best body language: "The Bouncer"). As Daniel, Van Damme initially stumbles around like he's doing a weird riff on Boris Karloff's version of Frankenstein's monster, complete with exaggerated grimaces and scowls. But in a couple of scenes, Van Damme simply reacts to his fellow cast members, like when Daniel, overseen by Lucas, patches up Miguel after a grisly confrontation with some characteristically bloodthirsty gang members. In this moment, Van Damme doesn't do much: really, he's just listening and frowning. But that's more than enough to be suggestive, a consummate quality that Van Damme has often tried to cultivate, but has rarely been able to sustain.

Unfortunately, Geller doesn't encourage Van Damme or any of his fellow cast members to be suggestive for long. Geller over-emphasizes the stereotypically violent nature of macho MS-13 members like Rincon's hothead second-in-command Jester (Charlie MacGechan) using blurry and/or shaky hand-held camerawork. MacGechan's face is consequently filmed with jerky camera movements that draw attention to the gun in his hand or his body's restless motion. Even close-ups of Castañeda's face (which is covered in tattoos) seem to emphasize his character's most garish qualities. Which is a real shame, since Castañeda shows great promise. Many of his tic-y mannerisms bring to mind tough guy kings like Al Pacino and Edward James Olmos, especially the way Castañeda tents his fingers, pauses dramatically, or leers without blinking. But Castañeda is good enough that I believed Rincon—and not the actor—had subconsciously internalized a couple decades-worth of his favorite gangster poses.

I sometimes wondered what "We Die Young" might have been like if Geller focused on his latent juxtaposition of Rincon and Daniel. Both characters want to simultaneously protect and escape their communities, but neither Rincon nor Daniel knows how to do right by their loved ones, especially Lucas. Rodriguez delivers a fine enough performance, but Geller never seems sure what to do with his main character. So for the most part, "We Die Young" follows a poorly defined audience surrogate, one who does what he's told without ever really standing apart from his guardians. Van Damme may be famous enough that he can afford to continue noodling around with different roles and performance styles. But his fellow cast members deserve a lot better than "We Die Young." 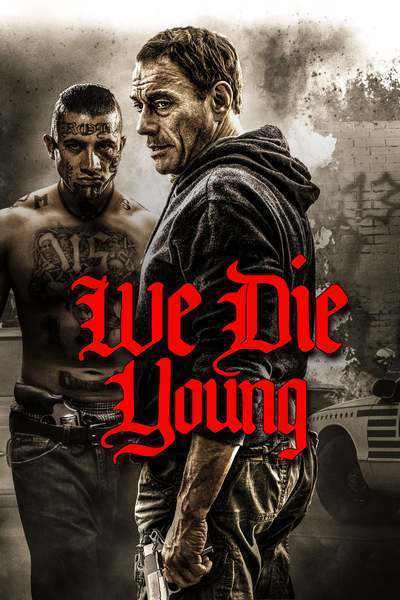 Rated R for violence, language and some drug material.