War of the Worlds: Goliath

As a professional or even semi-pro film critic I am rightly expected to know quite a bit about both the history of the film medium and the current state of its industry, but, you know, one can't be entirely up to date on everything. For instance, up until recently, that is, last week, I was pretty much unaware that Malaysia had been accelerating its animation production, and now had a pretty burgeoning quasi-national operation in that field. I learned this from "War of the Worlds: Goliath," which does its damnedest to not give its viewers a single clue as to its actual country of origin.

Yes, the movie was made at studios in Malaysia, but its director is an American (Joe Pearson) with voluminous art and animation experience in U.S. television; the voice cast is comprised of Western names, some of which you are not likely to be familiar with, one or two of which you may not have heard in some time (Adrian Paul, for instance; remember him from that "Highlander" show?), and the overall atmosphere kind of mid-Atlantic crossed with Japanese anime's idea of mid-Atlantic. And, oh, since it's a set-in-1914 quasi-sequel to the H.G. Wells novel whose title makes up four out of the five words of this movie's title, and features all sorts of anachronistic sci-fi technology, it's also "steampunk," ostensibly.

After the standard issue flashback in which a future hero is forever changed as a child when he sees his parents brutally cut down by inhuman killers, the movie opens after the first wave of Martians has died from catching cold, as in Wells' book. But humanity is still on the defensive, and the streets of New York are patrolled by giant human-operated bots and surveyed by dirigible and so on. A multi-national Martian Defense Corps called "ARES," co headed by none other than Teddy Roosevelt and a fictional Russian, is very nearly broken up by the initiation of World War I. But soon a new Martian invasion compels humanity to put down its petty differences and fight the common enemy. And so it does, with weaponry that's quite a bit more engagingly designed and animated than any of the human characters, who are all pretty much disgracefully bland and very literally two-dimensional. I much prefer the portrayal of Teddy Roosevelt in Don Rosa's Scrooge McDuck comics myself. Just saying.

This is so thoroughly negligible an animated effort one feels churlish taking it to task. The battles and explosions depicted here are not so engaging as to make up for the lifeless human element. Although there's something kind of poignant about these alternate-reality scenarios that derail real-life tragic history through sci-fi means, as if only a threat from out of this world can compel humanity to its full potential. Real history of course, has proven nothing of the sort. The main takeaway from "War of the Worlds Goliath" is that such a yearning still burns in some folks. If its articulation here were more compelling, it might have struck me as stirring rather than merely odd. 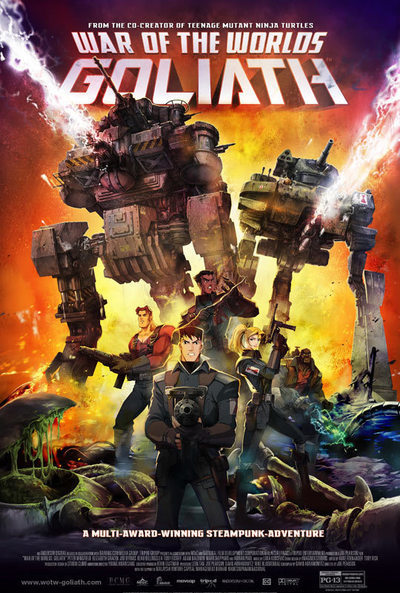