War for the Planet of the Apes

“War for the Planet of the Apes” is a film that unapologetically embraces the first word of its title. It opens with soldiers in a lush green forest with nicknames on their helmets, marching toward the enemy through the brush in a style that reminded me of “Platoon.” Over the next two hours, other war films will flash through your mind, most commonly “Apocalypse Now,” which Matt Reeves’ excellent blockbuster cribs from openly, even turning its villain into a Colonel Kurtz in the heart of darkness, complete with shaved head and rambling philosophy. (At one point, graffiti even reads “Ape-pocalypse Now,” as if to make clear that Reeves and company aren’t stealing as much as directly paying homage.) So why turn a franchise about sentient apes into a war movie that echoes the stories of Vietnam? What can be gained from looking at the darkest side of humanity through the lens of a summer blockbuster? The answer is quite a lot.

After the traumatic infighting that served as the centerpiece for “Dawn of the Planet of the Apes,” Caesar (Andy Serkis) and his fellow apes have become almost legendary, the animals in the woods that soldiers speak about with hushed tones. No one knows exactly where Caesar is or what his plans are, although we learn relatively quickly that his primary focus is survival. It’s an interesting narrative aspect of these films that Caesar so often seems to just be seeking peace, but he’s drawn back into conflict by human beings who refuse to allow co-existence with a species that may be their superior. That’s exactly what happens when a character known only as The Colonel (Woody Harrelson) attacks the apes camp, killing some of Caesar’s family. Now the ape learns another human emotion that often leads to tragedy: vengeance.

How “War for the Planet of the Apes” unfolds from here is relatively simple, especially for the often plot-laden genre of the summer blockbuster. One of the many brilliant elements of the script by Mark Bomback & Matt Reeves is its forced perspective. Other than that opening sequence, we stay almost entirely with only Caesar as he works his way to the mysterious human base with a few other simians and a mute girl they find along the way that they name Nova (Amiah Miller). For the midsection of the film, “War for the Planet of the Apes” also recalls a relative of the war movie in that it starts to feel like a modern Western, a road movie about a group of heroes riding to the town that has been overrun by the blackcoats. Again, the focus is remarkable. Dozens of other movies would have bounced us narratively back and forth between the Colonel and Caesar. It’s much stronger and easier to identify with Caesar because we’re on the journey with him, knowing only what he knows, but the pressure to bring the human star back before the hour-mark must have been high. It’s so smart of Reeves, a great director who also made smart decisions with the last film in this series and the woefully underrated “Let Me In,” to avoid it.

Reeves works masterfully here through all elements of the production, but his two smartest decisions may have been in hiring a pair of people you won’t see in any of the ads but who really help make this film the notable accomplishment that it is. The first is cinematographer Michael Seresin, who imbues “War” with a rich, natural color palette that defies what we’ve come to expect from blockbusters. The acclaimed cinematographer of films like “Birdy,” “Angel Heart” and “Harry Potter and the Prisoner of Azkaban” finds a way to emphasize the natural world around Caesar and his traveling companions in every sequence. It’s a film that is inherently loaded with CGI and yet the images I think of when I remember it are built on foundations of snow, water, trees, etc. The second is bringing on the great composer Michael Giacchino, who arguably does the best work of his career here, recalling both war films and great blockbuster scores of the ’70s and ‘80s with compositions that become essential to the overall success of the film. A stunning amount of “War” is silent—more than any blockbuster I can remember—so Giacchino’s score becomes as important as the compositions for pre-sound films in the way it conveys emotion and even internal conflict. It’s phenomenal.

How do I convince viewers who may be reluctant to see a movie about talking apes that these three movies have transcended their concept to become one of the best Hollywood trilogies of their generation? As with so much great science fiction—which is really what a movie about evolving apes is in the end—“War for the Planet of the Apes” is a mirror to what human beings are like in 2017 as much as anything else. It is about infighting and vengeance. It is about loss and the need for people to hold on tightly to that which keeps them going. When our support systems are wrenched away, we respond with anger and violence. And when there are things in the world that we don’t understand, we respond with fear and battles for control. All of this and so much more is woven through “War for the Planet of the Apes” in a way that often doesn’t hit you until hours or days later. While it may be a few beats too long, especially in its multiple endings, it’s a shockingly memorable movie, the kind that gets better as you dissect and discuss how much it does right after the lights have gone up.

And, let’s not forget this important factor for summer movie dollars, it’s wildly entertaining. It has comedic beats—many of them courtesy of Bad Ape, voiced memorably by Steve Zahn—to match its philosophical ones. It has action sequences, especially in the final act, to rival anything this year. And it closes out the Caesar Trilogy of “Apes” films in a way that feels rewarding and emotionally satisfying. Looking at Caesar’s face, I was reminded of Clint Eastwood’s aged visage in late-career Westerns, sternly looking at a horizon that he knows may be his last and allowing the ghosts of his past to play in his memory. I realized looking at that face that Caesar will be an iconic character, one that moviegoers watch for decades to come. And these films will only grow in esteem and acclaim. Greatness always does. 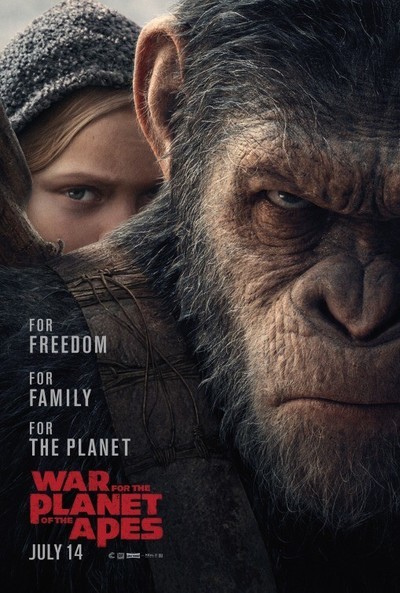