Many of us were told in school that there were seven basic types of stories, and that two of them were "man vs. nature" and "man vs. himself." Of course, all good stories ultimately fit into that second category, even if the other ones fit, too. "Walking Out," a wilderness adventure by the sibling filmmaking team of Alex and Andrew Smith, is a fine illustration of this idea. It's about a soft, suburbanized 14-year old named David (Josh Wiggins) who goes deep into the Montana mountains to visit his strong, silent outdoorsman father, Cal (Matt Bomer), then accompanies him on a moose-hunting trip. The expedition goes horribly awry, forcing the boy to discover an inner, primal strength he never imagined he possessed.

Father and son are estranged, and the difference in their lifestyles divides them further. The boy is such a product of modern civilization that he clings to his phone like a child with a teddy bear. His father mocks him for it, and demands that he leave his phone behind when they head off into the woods for a moose hunt that will require them to live in a hut on a mountain. Things start to go wrong fast, starting with the discovery of the corpse of a moose that was shot and left to decay in  a pond by "tourist" hunters who lack Cal's respect for ritual.

A chance encounter with a grizzly bear cub leads to a series of mishaps that force David to mature. It's a credit to the movie that this is never depicted as a necessary step for the boy to become a man. We're always aware of the awful weight of the responsibility that's suddenly been placed upon him. It's just not fair.

Shot by Todd McMullen in a series of elegantly composed, super-wide images, edited with a minimalist flair by Michael Taylor, and scored mostly with mournful, contemplative classical string instruments by Ernst Reijseger, this is a meditation on the rituals and tragic weight of masculinity, as passed down from macho fathers to their sons, and by those sons to their sons. The movie would fit nicely in a film festival comprised of works with a similar theme, including "Legends of the Fall" and "The Revenant" and older wilderness dramas like "Jeremiah Johnson" and "Bend of the River."

Unfortunately, it's largely devoid of humor. And there are times when it leans too hard on the usual signifiers of Tragic Masculinity—particularly when the soundtrack brings in a holy choir to underscore the holy devotion of son to father, and vice-versa, and whenever Cal launches into philosophical frontiersman mode, explaining the mystical communion of man and nature like a graduate fiction writing student who just got back from a camping trip. Much of the latter appears to have been added by the filmmakers, though you can understand why they thought it was necessary: the source material, a 1988 short story by David Quammen, is light on dialogue and heavy on terse descriptions of people doing things.

Throughout, Cal tries to bond with David by telling him stories about how his own father (played in flashbacks by Bill Pullman) instructed him in the same manly arts that Cal is passing down now. These scenes are less successful than the present-day material, not just because they kill the sense of immediacy but because the images of young Cal and his father are so eloquent that the narration doesn't really add much to them. This is often the case with the present-day scenes as well, though. The film works best as a simple tale of a "civilized" person's immersion in the natural world, conveyed through scenes of physical struggle. The difficulty of survival and the stakes involved in every decision make you realize how naked modern humans are without technology. The closeup of David's face when the ordeal finally ends is suffused with an overwhelming sense of relief. 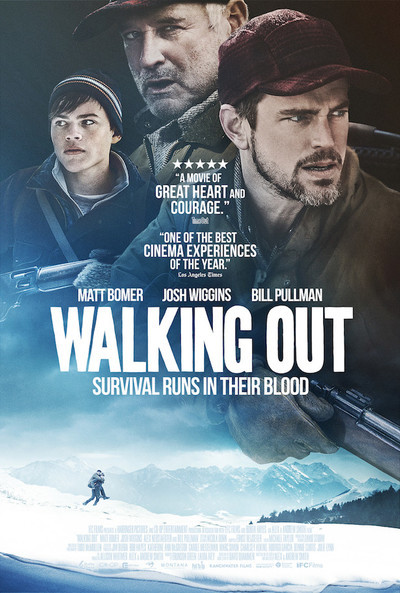