Over the course of the 90-minute "Walk of Shame," Elizabeth Banks’ character—a perky and wholesome local news anchor—is mistaken for:

This repetitive misogynistic streak is in the service of painfully wacky gags, the vast majority of which land with a thud.

But then! Writer-director Steven Brill ("Little Nicky," say no more) dares to make an abrupt, 180-degree turn in the film’s final moments by trumpeting itself as an indignant feminist manifesto.

Just because a pretty blonde woman is traipsing about the streets of Los Angeles in a skimpy, yellow dress and high heels, this does not make her deserving of scorn and degradation. Shame on everyone for treating her so poorly—and shame on you too, sir or ma’am, for laughing at her plight (if you do indeed find anything amusing here).

It would all be galling if it weren’t so lame. But "Walk of Shame" is notable only for turning the unendingly adorable Banks into an unlikable figure. She certainly gives it her all and is game to go to extremes in every slapsticky situation. But her character is more of a collection of superficial, clichéd ideas than an actual person, which makes it pretty much impossible to care whether she makes it out of her hellish night and gets home from her walk of shame in one piece. It’s a depressing waste of her comic talents and charm.

Banks stars as the glossy and vapid Meghan Miles, who’s on the verge of landing the network television gig of her dreams. For some reason, an anchor of her stature in the second-largest market in the country doesn’t have an agent, but instead communicates with the network bigwigs through her producer, played by a barely-there Willie Garson. (The ways in which "Walk of Shame" gets TV news wrong could be the subject of a whole ‘nother essay, but we’ll move on for now.)

But when Meghan goes out for a wild girls’ night with her two best friends, she gets so hammered, she doesn’t realize that the network honchos are coming to L.A. the very next day to assess her one last time before offering her the job. (This major plot point is one of the movie’s many contrivances.)

Meghan has the obligatory wisecracking pal (Gillian Jacobs) as well as the obligatory ditzy pal (Sarah Wright Olsen). After downing way too many shots with them, she ends up going home with a sweet, cute bartender named Gordon (James Marsden, also underused). But then a series of complications ensues: Her car gets towed with her wallet inside. She loses her cell phone, but doesn’t know anyone’s number to call for help anyway. She also doesn’t know where she is when she stumbles out of Gordon’s downtown loft because she knows nothing about Los Angeles geography—despite the fact that, oh, she covers this town for a living.

(Not that "Walk of Shame" gets its geography right either; there is no intersection of Rossmore and Normandie avenues. They’re parallel north-south streets. But now we’re just nitpicking.)

And so Meghan stumbles from one zany and/or dangerous situation to another. A couple of mismatched cops (Ethan Suplee and Bill Burr) think she’s a prostitute on a rampage and chase her all over the place. A cab driver (Ken Davitian) demands that she give him a lap dance. A bus driver (Niecy Nash) shoots pepper spray in her face. The most surprising and inspired scene of all takes place in a crack den, where a trio of unlikely allies (Da’Vone McDonald, Lawrence Gilliard Jr. and Alphonso McAuley) offer her shelter as well as advice on her on-air delivery.

But first, they refer to her as "that bitch from the news." 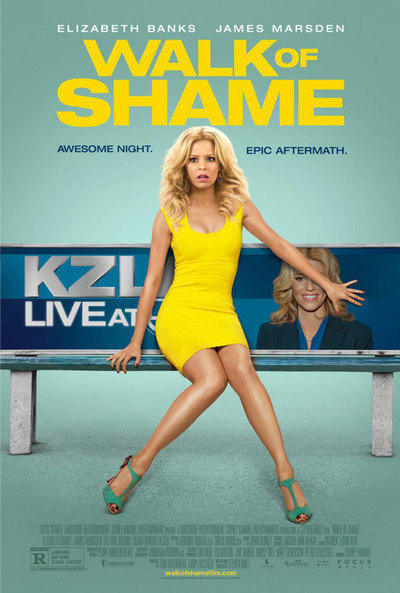