Superficially, Gay Talese and Gerald Foos would seem to have nothing in common besides their age.

The former is a veteran, celebrated New York writer: the impeccably dressed and highly influential pioneer of New Journalism. The latter is a former Colorado motel owner: a hot-tempered, heavyset man who lives in paranoid suburban seclusion.

But as they come together as interviewer and subject in the documentary “Voyeur,” it becomes clear how many traits they share—and how their decades-long connection reveals uncomfortable truths about both themselves and human nature.

Directors Myles Kane and Josh Koury spent years with these men, documenting their unlikely friendship and mutual fascination. Both Talese and Foos are raconteurs with larger-than-life senses of self. Both are obsessive collectors who have crammed their basements with tidily catalogued items: Talese of the articles, photographs, notes and memorabilia from a life spent in journalism; Foos of the baseball cards, coins, stamps and dolls he hopes will make him a fortune one day.

And both are fascinated with sex—Foos to such an extent that he bought a motel in Aurora, Colorado, in the late 1960s, built a hidden observation platform in the attic above the rooms and spied on his guests through the vents. With his dyed hair and beard and oversized, smoked eyeglasses, Foos explains in richly resonant tones that he knows he’ll be viewed as a pervert and a peeping Tom for his activities: “I’m prepared for that,” he says defiantly. But he didn’t want to die without sharing his “findings.”

Ostensibly, Foos was invading his customers’ privacy in the name of social research, methodically documenting their activities and proclivities to gain a comprehensive understanding of an evolving, Vietnam-era America. He had grandiose notions of functioning as an all-knowing, all-seeing Godlike figure, albeit for the greater good.

Mostly, though, he wanted to watch people getting it on.

Talese, the famed author of the groundbreaking 1980 book about sex in America, “Thy Neighbor’s Wife,” was understandably fascinated (and a little disturbed) when Foos contacted him to tell his story and share his journals. “I’m a voyeur myself,” Talese says in explaining why he was a natural to tell Foos’ story. And that’s exactly what he did in the April 11, 2016, issue of New Yorker magazine as a precursor to the release of a non-fiction book on the subject, “The Voyeur’s Motel,” three months later.

But something happened during those three months that changed everything.

You may have heard or read about the credibility questions that arose after the New Yorker piece came out, ones Talese himself acknowledged high up in the lengthy article: “Could such a man be a reliable source?” he wondered, given that he was the lone voice and his claims were outrageous. In that case, the film’s broad strokes won’t come as a complete surprise. Whether or not you’re familiar with this story, though, “Voyeur” takes us on a roller coaster ride of deviant behavior and delicate egos, as two men who’d forged an unexpected and intimate bond suddenly find themselves questioning each other over the nature of the truth.

The term “Fake News” gets bandied about a lot these days—mostly by the President of the United States, unfortunately. But “Voyeur” explores the lengths to which seasoned reporters can go to get a tough story right and still end up being duped, as well as the ethical and emotional entanglements that can spring from investigative journalism. The documentary is fascinating in an admittedly prurient way for the first half or so, then shifts and becomes compelling in an even larger, more relevant context. And as it does, it exposes the extreme elements of both men’s personalities.

As the narrative morphs, it also calls to mind the 2007 documentary “My Kid Could Paint That,” in which director Amir Bar-Lev investigated the paintings of a four-year-old girl whose work was being compared to Picasso and ended up becoming part of the story itself the deeper he questioned its truth. Lines get blurred when you spend so much time with a subject—and by nature, the filmmakers themselves are voyeurs, too.

“Voyeur” gains momentum as Kane and Koury cross-cut between the two men in the days leading up to the book’s release, with Joel Goodman’s score adding to the tension. We see Talese standing proudly before his tailor, being fitted for the bespoke suit he’ll wear to promote "The Voyeur’s Motel” on “Late Night With Seth Myers.” Meanwhile Foos has lost his swagger altogether—except for the occasional rant—and holes up with his quietly supportive wife, Anita, in their side-by-side recliners. (The scene in which he delivers a rapid-fire screed while slowly descending the stairs in a mechanical chair is darkly funny and deeply sad at once.)

When the directors allow the natural drama of this relationship to play out—and when they let us simmer in the inherent ickiness of it all and decide for ourselves how we feel about it—“Voyeur” feels bracingly relevant. At a time when we all share every mundane detail of our daily lives online and every Google search and Amazon purchase we make follows us for all of eternity, there is no such thing as privacy anymore. But too often, Kane and Koury don’t seem to trust entirely what they have, and they needlessly pad “Voyeur” with miniatures, re-enactments and an overall light, playful tone. It all seems at odds with the story’s fundamentally disturbing—yet gripping—content.

Talese and Foos are both in their mid-80s now, and as Talese put it, Foos will probably earn an obituary in the New York Times someday for his bizarre place in pop culture. No doubt, it will be meticulously fact-checked. 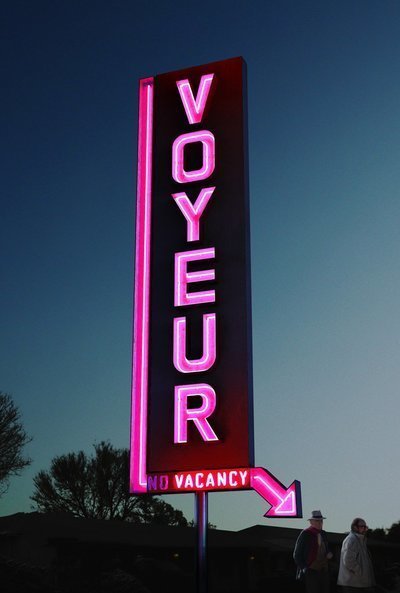