Disclaimer: this review of "VooDoo," an ultra low-budget found-footage horror film, should be a 2.5-star review since the film doesn't really come to life until about 50 minutes in. Before this turning point, we follow two cousins, Dani (Samantha Stewart) and Stacy (Ruth Reynolds), as they rebound from recent heartbreak by sunbathing, drinking, and flirting their way throughout famous Los Angeles landmarks, like Venice Beach and Hollywood Boulevard.

But at the 50-minute mark, the film enters a grotesque funhouse-style recreation of a Boschian hellscape. I can honestly tell you: I have yet to pick my jaw up off the floor after spending almost 30 minutes(!) watching this aglet-less shoestring budget vision of Hell. Is it good? Uh, well, kind of. Does it make sense? Hmm, er, ask me another. Is it worth seeing? Oh, absolutely.

I'm gonna have to back up for a moment and talk about the plot of "VooDoo" before I get to what makes it so special. Dani, a New Orleans resident, parties it up with cousin Stacy, a Los Angeles bohemian who enjoys pot and is in a rock band. During their relatively tame outings, Dani confesses that she just finished having an affair with a married man. The trouble is that the wife of the man in question is a voodoo priestess. This doesn't seem to matter throughout much of "VooDoo" since so much of the film is about how Dani and Stacy are doing everything but thinking about their problems. There are a few signs that trouble is on the way, like a laughably bad pre-opening-credits sequence that follows a mysterious killing spree perpetrated by (wait for it) a hammy, child-killing voodoo priestess. But there's really not much else of note going on plot-wise during the first 50 minutes or so, apart from a phone call from an ex-lover, and a warning from a palm-reader.

This is something of a problem since, as was previously mentioned, "VooDoo" is a very low-budget movie. Which is to say: the acting ain't great—Stewart's Southern accent is especially unfortunate; the production values are non-existent; there's a random cameo from porn star Ron Jeremy. I mean, arguably, the first 50 minutes of the film doesn't need any of those things since all it has to do to be effective is lull you into a sense of complacency before delivering its long sucker punch of a finale. Nevertheless, it is dispiriting to see a movie come so close but ultimately fail to say something—though arguably something stupid—about young women, and the way their identities are dependent on their sexual freedom. That theme is right there swimming on the surface the film, and it's the only emotional tether to the film's brutal, exhausting, preposterous, intoxicating nightmare-stew of a climax.

Before we get to the good stuff, I must file one major complaint: this movie's found footage premise barely makes sense. Dani wants to film her trip to the big city of Los Angeles. So, she's filming during perfunctory scenes of wide-eyed, tourist-y pleasure, like when Dani visits Grauman's Chinese Theatre and freaks out after she finds Marilyn Monroe's star on the Walk of Fame. And she's still filming when some weird hobo gawps at Dani and Stacy as they sunbathe ... OK, that one kind of makes sense. But Stacy keeps filming when Dani gets a mysterious phone call? And when they're smoking weed in the back of a cab? And when Dani's about to go to bed? Who does this and what am I supposed to think about the vacuity of these characters, beyond a generic understanding that they are mindless cyphers who have to move the film's high-concept premise along by hook or by crook?

In order to tell you about the part of "VooDoo" that makes it worth seeing, I must regrettably spoiler you, gentle reader (it's for your own good): the movie ends on a gratuitously grim down note. You will not see this ending coming, despite a couple of hints of impending voodoo-related violence. But there is a solid 25-30 minute segment of this film set in Hell. And it features some intoxicatingly deranged, albeit tasteless, and sometimes pointlessly cruel, scenes of diabolical torture. This is a movie where a demon commands one victim to "Choke on your mother's bowels" right before serving up a pair of intestines. There's a scene where a man gets assaulted with a crucifix. And there's a scene where Dani is visited by a child molester. And then there's her dead mother. And for good measure, a very horny Devil in this movie, too. Again, I can't quite believe what I saw, and I'm seriously awed by the zealous energy, and ingenuous bad taste it required to kick this film into high gear at the very last minute. You really must see this film, if only to sate your morbid curiosity. It's not exactly good, but it is pretty inspired in a very unclean, very unsound way. 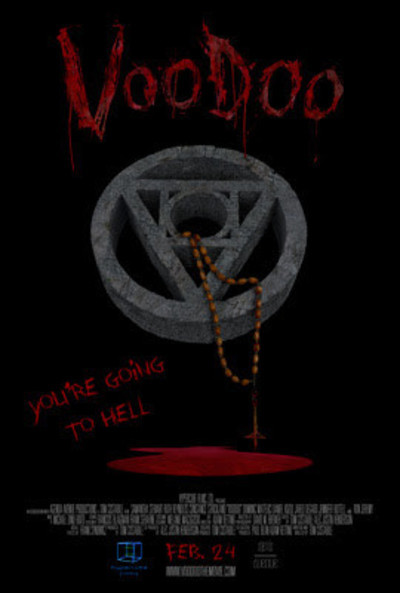