"Vitus," a sentimental, crowd-pleasing "Pinocchio" fable, turns the child prodigy movie on its ear a bit. The title character (pronounced "Vee-toos") is a budding piano genius, who, like Pinnoch, wants nothing more than to become a real boy. So the movie isn't so much about the kid triumphing over adversity and realizing his artistic and competitive potential; it's about how he longs to become someone else: a normal kid.

"As normal as me?" asks his beloved eccentric grandfather played by Bruno Ganz.

But who wouldn't want to be more like Bruno Ganz -- everyone's idealized grandfather, even if he did play Hitler in "Downfall"? Grandpa is a kind and wise fellow, as elderly movie mentors always are. Of course, the boy adores him, and they share a love of flying -- whether with hand-crafted balsa-wood bat wings or single-engine aircraft.

"Vitus," the Swiss entry for the 2006 best foreign film Oscar, freely mixes its audio-visual metaphors in ways that express its title character's inner turmoil and confusion. The flying motif is linked to Vitus' ability to "soar" at the piano keyboard -- which he likes to play faster and louder, as if it were a video game (or a flight simulator). Not only does he possess a highly advanced musical sense, but his sense of hearing itself is augmented almost to bat levels by the sensitive directional microphones in a headset developed by his father Leo (Urs Jucker), a hearing-aid inventor.

His world is fragmented and compartmentalized, with glass and mirrors reflecting how others see him, how he sees himself, and possibilities of who he might become. Through the windows of his parents' high-rise apartment, giant cranes suggest the constant renovation and construction project -- internal and external -- that is a human life. As the body grows, and the mind develops, parts of the personality are torn down and remodeled, with new structures rising from the rubble of the old ones.

Maybe that makes "Vitus" sound kind of heavy, but it isn't. One of the most interesting things about it, though, is that as the boy ages from 6 to 12 (played by Fabrizio Borsani and then Teo Gheorghiu, both piano prodigies), you may wonder if Vitus should have been named Damien instead. The kid has certain undeniable gifts, and may even be headed for a special destiny, but he's also a real pain in the tuchus. He ridicules his teachers to display his intelligence.

His English mom, Helen (Julika Jenkins) knows he's incorrigible (and often insufferable), but she loves him and she does her best. She knows he's bored, not sufficiently challenged with a regular high-school curriculum at age 12, but she and Leo also don't want to treat him like a hothouse flower and send him to one of those "special schools," which she calls "zoological gardens."

So this leaves Vitus adrift in the strange limbo that all kids, but especially precocious ones, pass through -- somewhere between childhood and adulthood with an identity that hasn't solidified. Here he is, only a dozen years old, and he's facing career-track decisions about what/who he wants to "be": pianist? architect? chemist? taxi driver? pilot? butcher? veterinarian? surgeon? No wonder he's feeling a little schizoid.

After an accident (don't worry, this doesn't venture very far into the story), Vitus attempts to adjust to "normal" (pronounced with the accent on the second syllable, "nor-MAL," the Swiss German pronunciation sounds more fitting than the English one). He even makes a friend his own age. But there's still a distance, a remoteness, between himself and everyone but his grandfather. As he and his school pal ride their bikes around and around a concrete square evidently designed for the purposes of "play," Vitus hears a piano in his head while the other kid listens to modern pop through headphones. The soundtrack eavesdrops on both, depending on who is passing through the frame. They're occupying the same designer patch of pavement, but they're in different worlds.

In the end, "Vitus" becomes more conventional -- more "nor-MAL" -- than you might expect. Or than you might have hoped. However, like the performance of the rousing Schumann piano concerto that provides the big finish, it also concludes on a triumphant note. Who knows? The more sentimentally inclined in the audience may even feel like applauding. 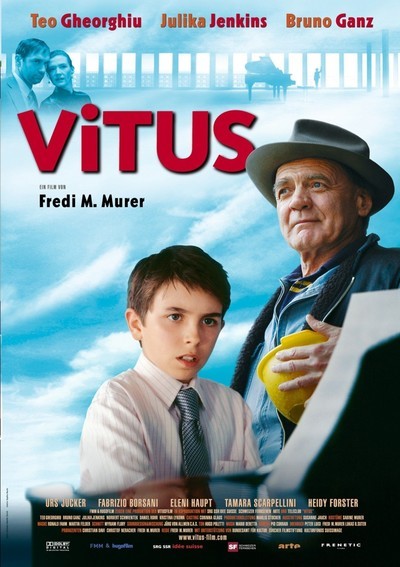