Los Angeles, 1999. A city of zombies in gray business suits, walking unseeing in the streets. Only two people seem aware of their surroundings. One of them is Parker Barnes (Denzel Washington), who moves easily through the crowds, in search of something. His quest leads to a Japanese restaurant, where there is a bloody struggle with a bad guy who has taken hostages. There is a shoot-out, which does not develop quite as it should. . . .

And this has all been a computer game, as we suspected, since some of the shots of the sky fluttered as if the screen were repainting itself. Back in the real world, Barnes is revealed as a former cop, now in prison, with a computer-controlled artificial arm.

And the game is explained as virtual reality training for police, to help them cope with sudden emergencies.

In "Virtuosity," Barnes finds himself in familiar fictional territory: This is yet another retread of the familiar formula where the rogue cop is reactivated because he is the only person who can deal with the brilliant and dangerous villain. But here the movie turns up a new twist. The bad guy in "Virtuosity" is not a human being but a computer program named Sid 6.7, which plays the villain in the VR simulations.

Sid 6.7 (given human form by Russell Crowe) is some program.

Into his cyber memory has been pumped the personalities of 200 criminals, including Charles Manson, John Wayne Gacy - and the man who killed Barnes' own wife and children. Sid is so intelligent he knows how to tap into his many personalities in order to torment his enemies, and he taunts Russell with memories of his family.

And Sid has other abilities. We see how new science has made it possible for computer chips to replicate themselves, using the raw material of silicon. Sid pulls off a really neat trick, escaping from the "box," or computer, and creating himself in the real world.

(There is a nice moment as he takes shape, slumps for a second, and then understands the sensation he is feeling: "Gravity!") Sid takes physical shape as a mandroid, escapes from the lab and becomes a serial killer at large - 200 serial killers at large. There are two catches. One is that Sid 6.7, programmed with artificial intelligence, can now grow on his own, rewriting and improving his own programs. The other is that Sid is interactive down to the tiniest electron in his cybersoul. He is not happy unless he's involved in a battle with his antagonists, since the world of computer gaming is all he knows.

For Barnes, who for a cop is unusually knowledgeable about computer programming, this is the ultimate challenge, and "Virtuosity" is clever in the ways it finds to morph the situation.

One problem is that Sid, like the mercurial villain in "Terminator 2: Judgment Day," is hard to kill because he has control over his physical manifestation. Shot many times, his limbs lopped off, he regenerates by using silicon (even eating glass, which is always appropriate for a villain). Lacking all the higher human instincts, he is a real rotter, at one point ordering his hostages to scream and then conducting them like an orchestra (this is a steal of an old Second City routine, but never mind).

For the merely human Parker Barnes, Sid evokes memories of the dead family and plays cruel jokes: Like all true computer games, he exists to be played, and in a sense he would be defeated even in victory because then the game would be over, and he would be inactive again. So involved does he become, indeed, that Sid 6.7 loses track of exactly what side of the cybermembrane he's on, and at one point is astonished to find he has returned to virtual reality and is no longer in the real world: "I'm back in the box?" The movie supplies Barnes with a partner, Madison (Kelly Lynch), but she in a way is even more of a cyber creation than Sid, because she has no particular function except to be the token female sidekick: good-looking, supportive, able to be endangered when necessary, etc. The real battle is between Barnes and Sid 6.7 (and Sid's programs, including the nicely named BombShop 6.7).

"Virtuosity" is an example of a struggle that goes on in Hollywood between formula and invention. The movie is filled with bright ideas and fresh thinking, but the underlying story is as old as the hills, right down to a final confrontation on catwalks (there is nothing quite like a catwalk for satisfying scenes in which characters hang by one arm, bash each other with pipes, fall to their dooms, etc.). What redeems "Virtuosity" a little is that even at the end, even in the midst of the action clichés, it still finds surprises in the paradox of a villain that is also a program. 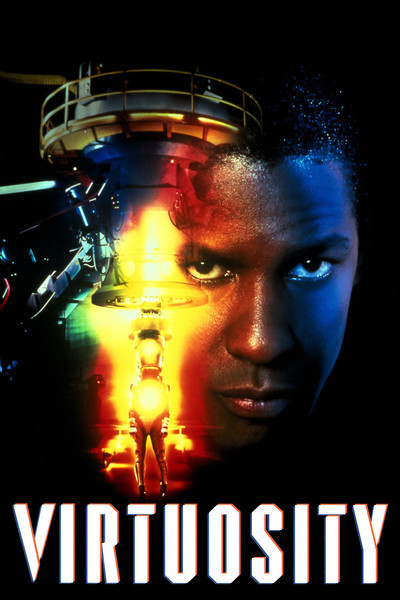