“Viper Club” is being released by YouTube Original Films, which is appropriate because it looks like it was shot and framed for the tiniest YouTube window possible. This is an ugly looking film filled with headache-inducing, shaky close-ups and questionable editing. Which is surprising; director Maryam Keshavarz is no novice, plus she directed an episode of the often remarkable-looking Ava DuVernay series “Queen Sugar.” Yet the only time the film is visually effective is when its protagonist Helen (Susan Sarandon) looks at YouTube videos made by her journalist son Andy (Julian Morris). When the film opens, Andy has been kidnapped after venturing into the Syrian war zone featured in many of those online reports.

Helen is an emergency room nurse whose personal life has revolved solely around Andy. A significant other is never mentioned, nor are any other children. Helen’s life is split between her fierce devotions to  her son and her job. Sarandon is a good choice for this type of role, as she usually brings credibility to playing a regular person entrenched in her work. When she dispenses tough love to new ER doctor Reza (Amir Malaklou), you can feel both her steely professionalism and her empathy for what he’s going through. Dr. Reza has just lost his first patient, one of the victims of a multiple shooting, and he has to tell the parents the worst news they’ll ever hear. He must also provide care to another victim who is in a coma and on life support. Helen reads to this little girl from the same book she once read to Andy.

When not at the hospital, Helen interacts with the FBI to help bring Andy home. As expected, the FBI is useless, demanding that she remain secretive while dragging her through oodles of bureaucratic red tape. The kidnappers are asking for $20 million ransom, which the US will not pay because “we don’t negotiate with terrorists.” Andy’s case is further hindered by the fact that he was not an embedded journalist and the FBI sees freelancers as rogue agents acting of their own volition. “He knew what he was getting into,” is a message that is presented more than once in “Viper Club,” though understandably, Helen doesn’t see it that way.

Inaction by the Feds leads her to meet with Charlotte (Edie Falco), a woman whose kidnapped son was rescued without the help of a government agency. Charlotte’s information is provided by Andy’s ex-girlfriend, Amy (Lola Kirke) whom Helen is treating and medicating despite her complete lack of insurance. This compassionate healthcare gets Helen in trouble with her supervisor Keisha (Adepero Oduye), but let’s try to stay focused on the main plotline here. For reasons known only to screenwriters Keshavartz and Jonathan Mastro, Charlotte lies to Helen about paying any ransom for her son’s release. Later, we’ll learn that not only did Charlotte pay heavily, her upper-class status allowed her to solicit donations from wealthy friends, politicians and celebrities.

As a nurse, Helen has neither the money nor the connections. While Charlotte sets up meetings, Helen meets Andy’s fellow journalist and best friend Sam (Matt Bomer). Sam tells her about the Viper Club, a network of freelance journalists and overseas connections that look out for and inform each other. Sam’s connections can provide more information than the FBI or her Congressman will. While the Viper Club provides a bit of hope for Helen, she’s still required to come up with the money. Charlotte and Sam demand that she violate the FBI’s secrecy wishes and go public by recording a message to the organization holding Andy hostage. (The movie is never clear what that organization is.) The taping of this video message is the first thing we see in “Viper Club,” and it’s the first warning that this movie has a fetish for flashbacks.

Flashbacks are how we experience Andy, and it’s a major misstep because this structure keeps us from seeing him as anything but a cipher. Outside of one scene where the adult Andy briefly argues with Helen about his desire to report from the most dangerous corners of Syria, Andy appears as a child or a teenager in gauzy, silent home-movie style memories. He stares at the camera wistfully or appears in the room where his mother presently stands, a gimmick that becomes tiresome and even laughable by the thirtieth time it’s employed. Inadvertently, this makes Andy seem as the FBI sees him, a boy loved by his mother but inconsequential otherwise. At one point, Helen tells Sam that he knows the current Andy better than she does, and her admission feels like an invitation for the movie to humanize Andy, to fill in some blanks. Instead, this scene devolves into a poorly shot snowball fight.

“Viper Club” is full of very heavy-handed parallels. It’s obvious that Helen’s interactions with injured children and grieving parents are commentaries on her own state of maternal helplessness. It’s obvious that Charlotte’s journey is meant to evoke the correct notion that class differences can bring about different results. And it’s obvious that Dr. Reza’s Iranian heritage and the questions posed to him about his home country are precautionary measures that balance out the depiction of the Muslim world. The film is so busy constructing itself that it forgets to nurture the drama of its central maternal bond. Instead, it relies on infuriating, heart-tugging tricks that do not inform and simply do not work. 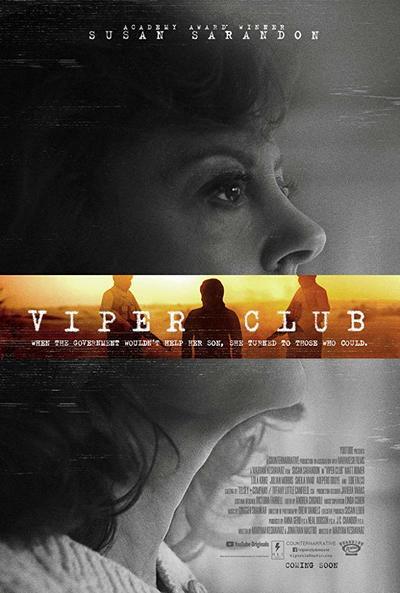 Rated R for language and some disturbing images.