Fans of minimalist but picturesque cinema will find a lot to like in “Violet” if they understand that when I say “minimalist,” I’m not kidding. The characters in this movie are not inordinately expressive and when they are being expressive, talking is maybe nineteenth or twentieth on their list of modes. Set in a Flemish-speaking semi-rural area of Belgium, this movie, written and directed by Bas Devos, examines the effect an act of violence has on the teen that witnessed it and did nothing to stop it. And by “examines,” I mean it just sets the camera back and looks for a long time, a lot of the time.

The movie opens with a shot of a bank of security monitors, and it’s on these that we see a stabbing, from a different perspective on each monitor. It’s an eerie scene not least because the mall where it happens seems utterly deserted except for the two perpetrators, the victim, and the kid witnessing it all, Jesse (Cesar De Sutter). Jesse comes away from the incident scuffed up. He tries to make some connection with the parents of his murdered friend. He and his other friends once again take up their BMX bikes and race through suburban roads and forests and biking parks. Jesse experiences some ostracization. One biker says to Jesse, “I don’t care what those guys think of you, but in my eyes you’re a coward. Don’t come back here.” Jesse blanks out as he partakes in other desultory activities; he goes to a death metal concert, and the song played by the band he sees (Deafheaven; typically, they are never seen onscreen) is “Violet.” Hence the movie’s title. I can’t tell you why, but there you have it.

Watching “Violet,” I was reminded at certain points of Gus Van Sant’s 2007 “Paranoid Park,” in which a skateboarder grapples with guilt after being directly involved in an accidental death. Like Van Sant, Devos seems to have a real affinity with the secret inner world of teens, and he has picked a cast of them that is both enigmatic and charismatic. But to be honest, “Violet” is so glacially paced that it makes the Van Sant film look like an episode of “Murder, She Wrote.” And “Paranoid Park” is pretty minimal by Van Sant’s own standards, so take that for what you will.

Where the movie really soars is in its pictorial quality. Devos shot his movie in 65mm, which offers particular advantages in image detail and clarity. He does not move the camera much, but each individual shot contains an object or just a focal point to which the eye will almost automatically move; he holds each shot to allow the viewer, once drawn in, to then mentally dolly back out, and take in the whole of a composition. How Devos relates this way of seeing to the themes suggested by the narrative remains oblique throughout. For this viewer, the formal element and the narrative never quite cohered, and I wound up admiring the movie for its ambition while unsatisfied with its achievement. 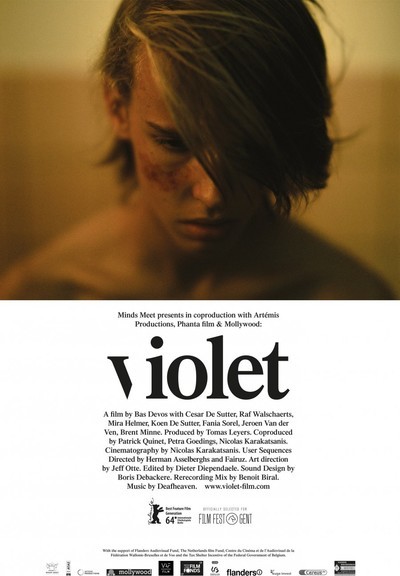