Tom Hardy is notorious for giving it his all—for digging in deep, physically and emotionally, for every role he inhabits. Whether it’s bulking up to play Bane in “The Dark Knight Rises,” being strapped to the front of a truck for “Mad Max: Fury Road,” spouting indecipherable dialogue as British gangster twins in “Legend” or spending the entirety of a shoot alone in a car for “Locke,” Hardy never half-asses it. It’s been said many times before, but it’s true: He’s our generation’s Brando.

So of course, Hardy applies that same intensity to the comic-book anti-hero origin story, “Venom.” And his fully committed performance is pretty much the only reason to see it.

This is an extremely minor entry in the Marvel universe (although it’s not technically a part of the Marvel Cinematic Universe, for those of you who care about these things), a tonally wonky lark that’s actually stronger when it’s sillier. It’s a mess, but a fun mess—at least for a while.

Think of this as an intensely violent version of “All of Me,” the 1984 comedy in which Lily Tomlin’s soul ends up in Steve Martin’s body. As in that film, the best parts of director Ruben Fleischer’s uneven extravaganza occur when Hardy’s character, investigative reporter Eddie Brock, struggles to retain control of his body, even as an otherworldly life force in the form of a menacing black blob is gaining strength inside and bickering with him.

The most successful example of this comes when Eddie first realizes the extent of his newfound (and unwanted) abilities—the thing that turns him from a regular guy into a hulking mass. A group of heavily armed henchmen have invaded his shabby San Francisco apartment to take him down and retrieve the gooey alien specimen inhabiting him, which he accidentally acquired while snooping around a high-tech lab. Eddie unwittingly annihilates them one by one, his limbs instantly stretching and transforming into sharp, shiny and supremely deadly weapons. His body gets yanked hither and yon and his panic rises, even as the growling voice in his head (also Hardy) grows louder and lifeless bodies lie scattered in his frenzied wake. In moments like this, Hardy seems down for both the demanding physicality of the role as well as the dark humor, even though the two mixed together aren’t always the smoothest fit as the film goes on.

When he’s completely overtaken by the wide-eyed, sharp-toothed Venom, he literally bites people’s heads off, but he also wants you to toss your head back in laughter with his wacky quips. (Four writers get screenplay credit: Scott Rosenberg, Jeff Pinkner, Kelly Marcel and Will Beall). It’s a tough balance to strike, one the extremely R-rated “Deadpool” movies achieved by absolutely going for it in terms of both ridiculous violence and raunchy humor. “Venom” is right there on the edge of what you can get away with and still maintain a PG-13 rating, in that it features massive amounts of carnage, gunfire and destruction, but no bloodshed. But as the film’s action set pieces grow larger in scale—including one particularly exciting motorcycle chase through the streets of San Francisco—they increasingly fail to connect emotionally and visually.

Fleischer (“Zombieland,” “Gangster Squad”) had the benefit of working with a true artist in Matthew Libatique, Darren Aronofsky’s longtime cinematographer. (He also happens to have shot Bradley Cooper’s remake of “A Star Is Born,” which is opening this week, as well. It’s a must-see for a multitude of reasons, but Libatique’s glossy, dreamy images are among them.) But so much in “Venom” happens at night—and Venom himself essentially looks like an enormous dominatrix clad in head-to-toe black Latex—that it’s often difficult to discern what’s happening. This is especially true when Venom takes on a guy whose body has become the host for another angry blob: mad billionaire scientist Carlton Drake (Riz Ahmed), who’d hoped to tame these space specimens for the supposed good of mankind.

Their fight scenes are as inscrutable as anything you’d see in a “Transformers” movie: a sticky mass of sinew, screams and flailing limbs. Sometimes, it’s clear that there are people inside these creatures, as opposed to the other way around, which complicates the visuals even further. But once again, on a more intimate level, the playful connection between Eddie and Venom can be enjoyable. This is often true in his/their interactions with Michelle Williams, who’s imminently overqualified for the role of Eddie’s ex-fiancée, Anne Weying. Hardy also has some sprightly interplay with Jenny Slate as the whistleblower at Drake’s company; it’s one of several examples of the film’s inspired casting.

And eventually, as we know, Venom will have to become a villain in Spider-Man’s web. That’s why we care about him, theoretically. For now, in Hardy’s hands, it’s the ambiguity of the character—if not his surroundings—that makes him intriguing. 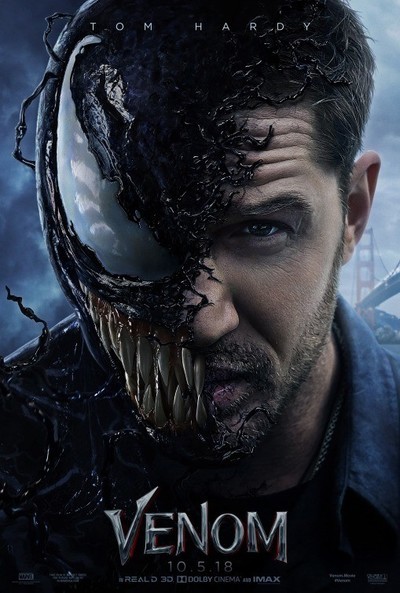 Rated PG-13 for intense sequences of sci-fi violence and action, and for language.