Reduced to its bare bones, the story of "Utama" (which is Aymara for “our home”) is one you might think you’ve heard a hundred times. A man and a woman work the land in a remote area that’s largely deprived of the blessings of civilization. But they’re old, and their age is catching up to them. And the condition of the land they’re working on is worsening. It might be time to pack it in. Soon enough a relative swings by, from the city, and tries to convince them that an easier, more congenial way to spend their end days awaits them. But the couple, the man, in particular, is stubborn. What he has is his, he insists, and not only is it his, it is in him; the traditions of his culture and the land are intertwined. To spend his last days anywhere else would be a form of blasphemy. And so the conflict stage is set.

Out of these familiar narrative elements, Bolivian director Alejandro Loayza Grisi constructs a film of dazzling visual power and genuine poignancy. In the Bolivian highlands, sometimes rendered as monolithically sere, and sometimes as geologically paradisal, Virginio (José Calcina) and Sisa (Luisa Quispe) farm llamas. Their plot is small: two huts and a not-particularly expansive pen for the animals, who have pink ribbons on their ears to identify them as the couple’s flock. While Virginio grazes the animals, Sisa, treks to a nearby village to fetch water. Except there’s no water these days. The specter of climate change haunts the land.

And soon from La Paz comes the couple’s grandchild, Clever (Santos Choque). With a little more candor than may be necessary, as far as etiquette is concerned, he tries to tell them their way of life is done. The villagers assemble a couple of times, first in a town meeting, and then in a trek to the mountains to find water (the sacrifice of a llama is involved; Virginio and Sira are of the Quechuan people, as are the villagers, and such is their tradition). But there’s nothing. Clever, who’s in his twenties, helps out in a desultory way, spending a lot of time on his phone. He brings glad tidings of a great-grandchild coming Virginio and Sisa’s way. But Virginio, who’s very disillusioned with both Clever and Clever’s father, won’t budge. This is due to his set-in-his-ways disposition of course but is also related to the nagging cough that worsens as the movie goes forward.

The characters and their dilemmas are rendered patiently and gracefully, with exemplary empathy. The players, particularly Calcina and Quispe, who had never even thought of acting before being approached, and had to be talked into it by Grisi, are quietly credible. But it’s the film's resplendent, unfussy visuals that make the most impact. Grisi comes out of the world of still photography, and each shot is framed and focused with purpose. His director of photography here is Bárbara Alvarez, who lensed Lucrecia Martel’s extraordinary “The Headless Woman.” The music, from a variety of local and indigenous sources, is evocative and unintrusive. "Utama" sounds like a warning even as it casts a spell, and the spell is one of life and death and eternal returns and never-ending struggles, and the rest we can try to take when the work is done for the day. 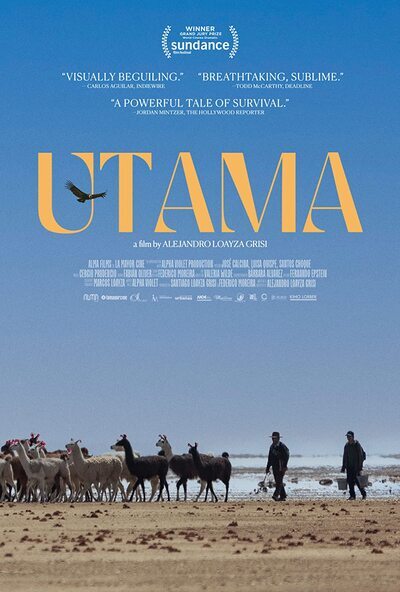