The story of the USS Indianapolis is one of the most harrowing in United States history. The Navy ship, a heavy cruiser, was tasked with a top-secret mission in the last days of World War II, delivering components for the A-bomb that would be dropped on Hiroshima, helping to end that war. (It was simply impossible for a plane carrying that bomb to fly from the United States to Japan.) After making the delivery to Guam, the ship took off, once again under a cloak of secrecy. But it was sunk by a Japanese sub and about a quarter of its men went down with the ship. About 900 other sailors clung to life rafts with scant supplies awaiting a rescue that was probably never going to come, given the nature of their mission. During the four-day interval before their discovery, the men were beset by sharks. (The character of Quint in “Jaws,” played by Robert Shaw, tells its story therein.) 317 survived. Things weren’t subsequently very rosy for one of the survivors, the ship’s commander, Captain Charles McVay. In what’s today widely seen as an example of internecine Navy scapegoating, McVay was court-martialed and convicted of hazarding his ship. He was posthumously exonerated by President Clinton in 2000.

You’d think, maybe, that they’d have made a movie about this event a long time ago. But if you thought harder immediately thereafter, you’d understand why they didn’t. Not only is the story in its particulars mind-blowingly grisly, it’s not one to which a filmmaker can easily apply an inspirational message. There’s also the logistical difficulty of depicting men floating in the ocean and fending off shark attacks for several days. As it happens, there was a made-for-television movie made about the events for CBS, “Mission of the Shark,” and network standards and practices ensured that it didn’t even try to depict the events accurately. In the hands of filmmakers with the will and means to contrive a realistic simulation of events, the results would be unwatchable.

The movie “USS Indianapolis: Men of Courage” is not exactly unwatchable, but it’s also completely not worthy of watching. The movie begins with Japanese planes having at the Indianapolis, and the scene looks like a video game, and not a particularly good one either. Into this shameless fakery steps, goodness gracious, Nicolas Cage, in his 648th starring role of 2016, as Captain McVay, who at one point looks into the camera and intones “There will always be war until we kill ourselves off as a species.” He’s talking, as it happens, to a framed photo of his wife, to whom he’s writing a letter, but it’s still disconcerting. There’s a lot of disconcerting in the movie’s opening scenes. Navy brass concocting the mission in Washington D.C. are shown as very contemporary cliché villains; they all talk like ceegar-chomping variations of Larry The Cable Guy as they discuss their strategy to end the war. To paraphrase Waylon Jennings, are you sure Harry Truman done it this way? I don’t think so.

Continuing the lazy inattention to period detail, we are soon treated to the sight of a burlesque dancer with obvious breast implants entertaining our boys. One sailor makes reference to “lean, mean, fighting machines.” Okay. Some of the young Navy men are given quirky character traits—one is keeping a poetic journal of his observations, such as “The streets are alive … and the sailors … are on the prowl to night!” There are others who have their extremely particular at-home dilemmas to solve once they return from the war, as for instance a romantic triangle half-filched from “Love Actually” featuring Cody Walker, Adam Scott Miller and Emily Tennant. There is some depiction of racial tensions between the sailors, and this is commendable in theory, but not in practice. So much of the dialogue is so bad, and the situations so hackneyed, that the question of “What would a World War II movie written by Tommy Wiseau sound like?” in case you’ve ever asked it, is herein answered. (The script is actually by Cam Cannon and Richard Rionda Del Castro, who’ve worked with Cage before on 2014’s “Rage.”) And in case you’re wondering why the scenarists went to so much trouble with these storylines, it’s merely so they could play shark roulette with the characters when the ship goes down. The “and then some of them got run over by a truck, only in this case a grey dead-eyed truck with sharp teeth” approach is crass enough that one wonders just where the idea that this movie was honoring he sacrifice of the real-life Indianapolis sailors could possibly have come from.

The movie is directed by Mario Van Peebles, who’s been behind the camera for some at-least-engaging pictures in the past. It would be a bad play on words to say that he’s out of his depth here, so let’s just aver that his reach here definitively exceeds his grasp. As formidably, teeth-grindingly bad as much of the movie is, near the end there’s a scene that’s almost affecting, one in which Cage’s McVay has a quiet, pained conversation with the Japanese sub commander who sank his ship, played by Yutaka Takeuchi. Two minutes of sincerity don’t make up for two-hours plus of bumbling and pandering, though. 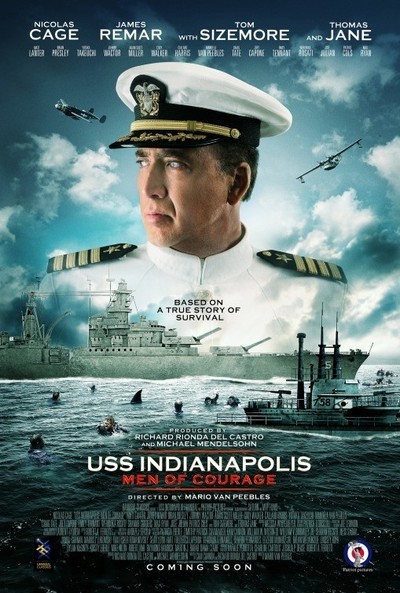