For many, the events of February 14, 2018, when a gunman murdered 17 people in Florida’s Marjory Stoneman Douglas High School, never really ended. And the day’s true physical and emotional toll remains untallied. With gun-control themed documentaries like “Newtown” and “Lessons from a School Shooting: Notes from Dunblane” under her belt, Kim A. Snyder directing “Us Kids” is a logical next step for her on the subject of gun violence.

Unlike other Parkland documentaries, which combined interviews from the parents and children most affected by the tragedy such as “Parkland Rising” and “After Parkland,” Snyder restricts her focus solely to the teens. The decision grants the director greater access to the main players than has been afforded to other documentaries, but the opportunity is squandered.

Snyder alternates focus between Sam Fuentes, one of the lesser-written about Parkland survivors, and the well-publicized circle of Emma González, David Hogg, Jaclyn Corin, and Cameron Kasky. On the day of the shooting, Fuentes sat by two victims, one being her best friend, swimmer Nicholas Dworet. Wounded herself, months later, she’s still grappling with survivor’s guilt. A terrible question for anyone of any age to ask, but especially a teenager, she wonders aloud how she lived but Nick didn’t. Her grief and Gonzalez’s "We Call B.S." speech at the Rally to Support Firearm Safety Legislation, from which the documentary takes its title, spurs Fuentes to contribute to the youth movement for gun control.

In the run-up to their march on Washington, Snyder takes care to compare this movement to the last major political youth reckoning—the Anti-Vietnam War protests and the Civil Rights movement. The palpable anger felt by the children leaps from every frame. Consider Snyder taking a montage of Republican leaders offering “thoughts and prayers” and juxtaposing the footage with scenes of political mobilization—phone-banking, sign-making, tweeting, and speaking—by the teens. Or González grating against the media’s harmful coverage of them—a theme Snyder should have leaned into with greater force. Especially since Kasky, when explaining the media’s appetite for stories, pointedly surmises, “We were being passed around like an STD in Florida State University.”

The threads weave together to climax at March for Our Lives. Snyder composes a harrowing montage of young activists speaking onstage mixed with Andra Day singing “Rise Up.” The effect is poignant at first, and then heartbreaking with Fuentes comes to the podium. Consumed by sorrow, and haunted by a deathly fear, she vomits while speaking, yet continues with her galvanizing speech. In her interview, Fuentes explains how the vulnerability of appearing on an open-air stage, making her an easy target for any potential shooter, tapped into her PTSD and caused her to vomit. The scene is the closest Snyder comes to connecting the physical wounds with the emotional.

Unfortunately, “Us Kids” loses steam after its rousing opening third by shifting from the dizzying momentum leading up to March For Our Lives to their bus tour for electoral change. Not only do the teens’ ambitions grow from the local level to a national stage, Snyder widens her net as well. She expands from the intimate one-on-one interviews with these young activists to include children from other parts of the country. For instance, there’s the black Milwaukee activist Bria Smith, who joined the tour expecting to stay for three days but remained for two months. There’s also Nick’s younger brother Alex, who Fuentes grows especially close to. The avenues present intriguing tangents for Snyder, but we don’t come away learning much about these additional teens—whether personally or emotionally. While the decision to widen the film’s scope makes sense on paper, in practice, it only slams the documentary to a halt. Where once the interviews were clear-eyed and insightful, the later footage lacks the former’s uncompromising intimacy.

Instead, later footage exhumes the mental costs these young activists bear, in particular, Kasky. And like the teens, we’re worn down too. Not just because of the ceaseless barrage the kids endure from pro-NRA groups, but because “Us Kids” fails to separate itself from other Parkland documentaries and falls into familiar cycles. Take Kasky talking with a patronizing counter-protester, who believes the Parkland kids are puppets of the left-wing. The same footage also appears in Cheryl Horner’s documentary “Parkland Rising.” The similarity wouldn’t be unfulfilling if it wasn’t accompanied by recurrent beats too, such as the weight of celebrity and the trickiness these activists face when planning for futures that’s been redefined beyond their control. Like the limited legislative change that has occurred due to the underappreciated efforts of these valiant activists, I wish Snyder’s “Us Kids” resulted in more. 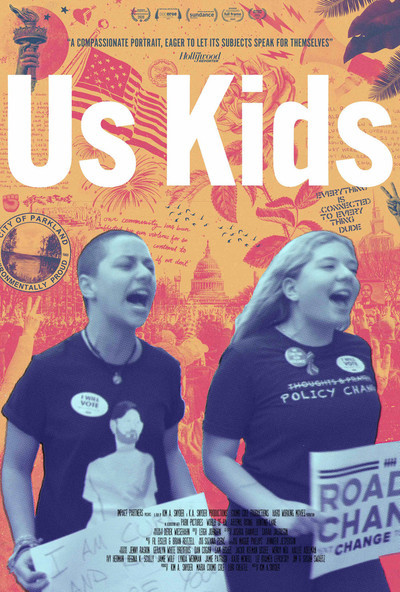