The license plates in the unnamed state where the thriller “Unhinged” takes place read: “America’s Heartland.” The suggestion is that the horrors that occur over the course of one inordinately eventful day—and the ire that prompts them in the first place—could happen anywhere, even in a seemingly wholesome, secure part of the country. (For the record, “Unhinged” was shot in Louisiana, land of the film production tax breaks.)

That much is clear from the montage of misery accompanying the opening titles in director Derrick Borte’s down-and-dirty picture. We see images of traffic jams, car crashes, rioting and random violence matched with talk radio reports of job losses, general despair and—this is crucial because it lays the groundwork for the mayhem to follow—woefully underfunded and understaffed police forces. “You gotta protect yourself these days,” says a random, worried voice. “We are going backwards,” echoes another.

But the script from writer Carl Ellsworth (“Disturbia,” “The Last House on the Left”) seeks to exploit the malaise blanketing the nation for cheap and gory B-movie jolts. Rather than explore legitimate feelings of disenfranchisement throughout the United States (which, arguably, led to our current presidential administration), “Unhinged” wallows in such fears and frustrations in tawdry fashion. You’re right to be mistrustful of your neighbors, it seems to say. After all, this is a world where a minor conflict at a traffic light can lead to an all-day road-rage chase with multiple bloody bodies in its wake.

Russell Crowe is the chaos agent driving this paranoid pursuit, literally and figuratively. Known only as The Man—because he could be any of us, get it?—Crowe is mind-bogglingly overqualified to play this thinly drawn character. So much so, that it makes you wonder why he would say yes. But the few pleasures “Unhinged” offers come from the highs and lows he manages to maneuver. The Man is either rampaging with all his bearded, burly might, which is unintentionally amusing, or he’s toying with his prey in a menacing rumble, which is sporadically effective. Like a malevolent Foghorn Leghorn in an oversized pickup truck, Crowe’s character is subtly menacing at first but eventually reveals himself to be impossibly indestructible.

The target of his fury is a harried hairdresser named Rachel (Caren Pistorius), a single mom who’s already having a rough morning by the time she clashes with The Man. Running late as usual, she’s dashing out the door to drive her tween son Kyle (Gabriel Bateman) to school but finds herself trapped in traffic no matter where she turns. Between squabbling with her ex and losing her best client, she’s in an understandably foul mood when she gets stuck behind The Man, and perhaps lays on the horn of her beat-up Volvo station wagon a bit too heavily when he refuses to go on a green light.

But she doesn’t know what we know about The Man from the film’s fiery prologue: He’s having a worse morning than she is, and he’s dangerous.

The bulk of “Unhinged” finds The Man stalking and terrorizing Rachel and everyone dear to her, including her best friend/divorce lawyer (Jimmi Simpson) in one particularly tense scene at a coffee shop. But despite moments like that, which Borte executes effectively, we’re mostly left with the icky feeling that we’re expected to sympathize with this guy for snapping. He’s been dealt a bad hand. Who could blame him, right? The Man is unleashing his anger in an extreme manner, but fundamentally he’s not wrong, “Unhinged” appears to believe. This becomes an increasingly untenable position, though, as Crowe’s character grows more brazen and the death count rises. The way he physically brutalizes Rachel and her young son is especially gratuitous, although it does result in a shocking act of violence that might best be described as Chekhov’s haircutting scissors. Pistorius does solid work throughout in expressing various states of panic, but she’s mainly reacting to Crowe’s improbable omnipresence.

“Unhinged” bills itself as the movie that’s finally reopening theaters this weekend, depending on where you live, following the Covid-19 shutdown more than five months ago. The distributor behind it initially intended to do so back on July 1, which clearly was optimistic. Maybe the film's frantic chases and crashes leading up to a wild climax are a lot more fun with other people in an audience, hooting and hollering with muffled excitement beneath their masks. But I doubt it. 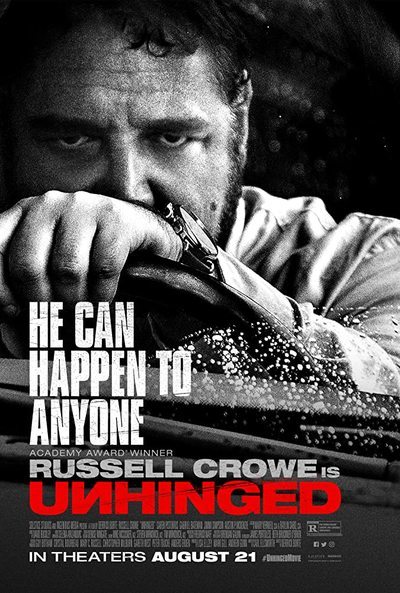 Rated R for strong violent content, and language throughout.

Russell Crowe as The Man