Whether it’s a major character like in “Book Club” or a passion to be followed like in “A Good Year” or “Sideways,” wine isn’t often portrayed in American cinema as an integral part of the black experience. In his good-natured feature debut “Uncorked,” writer/director Prentice Penny (“Insecure,” “Brooklyn Nine-Nine”) sets out to challenge and change these optics, braiding a formulaic father-and-son tale with a gifted African-American sommelier-to-be’s pursuit of his advanced palate. That scheme alone sets “Uncorked” apart from the typical “wine movie,” admittedly in short supply already. The filmmaker doesn’t really steer clear of box-ticking clichés—a tendency that often dents various Netflix-helmed movies such as “Always Be My Maybe.” But Penny still manages to put the tried-and-true template of a tale pitched between family tradition and individualism in new context, delivering something closer to a satisfying, everyday table wine than a rare, award-winning bottle.

Most of the film’s rewarding spirit is supplied by its lead Mamoudou Athie (“Underwater,” “The Circle”) in the role of the wine-enthusiast Elijah who dedicatedly works at a liquor store in Memphis. The film’s vigorous (and by all means, mouth-watering) opening sequence economically represents the world in which he dwells through a bit of slick editing—on one hand, there is the BBQ joint ran by his father, Louis (a coolly authoritative Courtney B. Vance), and on the other, there are the velvety pours Elijah sells and studies with enthusiasm while dreaming of becoming a master sommelier one day. That opening is followed by an equally endearing scene, in which Elijah spots a new customer, Tanya (Sasha Compère), and guides the inexperienced but curious drinker towards something that would align with her taste in hip-hop. “A Pinot Grigio is like Kanye West,” he suggests. Then he likens a Chardonnay, “the granddaddy of wines,” to Jay-Z and a Riesling to Drake. Tanya goes with Drake, upon which a sweet romance with palpable chemistry blooms between her and Elijah.

Meanwhile Elijah’s future, at least in his father’s eyes, seems to be decided upon—he would one day take over the family restaurant just like his father did back in the day, when it was run by the family patriarch. But things take a different turn when the young man finally decides to register for a course to tackle the impossible-to-pass sommelier exam. Two supporting characters—Matt McGorry’s initially arrogant but ultimately well-meaning “Harvard” (because, well, he went to Harvard, as he often brags about) and Gil Ozeri’s adorably awkward, often insecure Richie—furnish the film with much welcome notes of comedy. Elsewhere, Penny tries to do his best with keeping Tanya as well as Elijah’s supportive mom Sylvia (a fabulous Niecy Nash) relevant to the core of the story. Sadly, his efforts don’t always land—one labored, rushed-through plotline involving cancer especially drags down the film’s energy while failing to sell some bare-minimum teary emotions.

Still, this is the story of Elijah and Louis, and Penny mostly succeeds on those grounds, demonstrating his tightest grip on the narrative when he focuses on the similar pride that drives both men. For Elijah, that pride seems to be split evenly between his career obsession and parental respect, evident both when he strolls through the streets of Paris—a course-mandated excursion he embarks upon, thanks to his caring family’s generous backing—and when he works at his dad’s BBQ restaurant. And for Louis, that pride resides in familial legacy and love. Gradually, it becomes clear that Penny is more interested in what unites the two (they are both meticulous in their professions, for instance) rather than what sets them apart, forging the way to a conclusion of genuine, mutual acceptance, without abandoning the challenges they face even in a post-Obama world that many falsely consider to be post-racial. In the days where we’re all cooped up at home, there are certainly worse things you could do than settling in front of this pleasant film and its upbeat musical tracks (original music by Hit Boy) with a positive attitude and a smooth bottle of wine. It will go down easy. 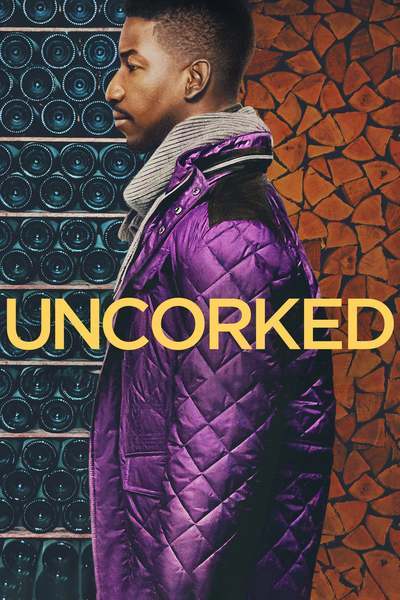 Courtney B. Vance as Louis