Always Be My Maybe

Sometimes, the great love you’re meant to end up with (in other words, the one) is right in front you. At least according to the age-old happily-ever-after premise of countless romantic comedies including “When Harry Met Sally,” in which two longtime friends fall to bed and become lovers—first awkwardly, then passionately. Nahnatchka Khan’s “Always Be My Maybe,” an eager-to-please yet unsatisfying genre dish, follows a similar formula with all the correct on-paper ingredients: a pair of likable leads, quirky sidekicks, eye-catching locations and through a brief role hilariously played by Keanu Reeves, even some major movie star appeal. It is then unfortunate that this tempting package by Khan, a creative and producing force behind ABC’s “Fresh off the Boat,” is so bland, feeling less like a movie and more like the output of an assembly line.

The bulk of the liability can be attributed to the writing, with responsibilities shared across Michael Golamco, Randall Park and Ali Wong—the latter two artists, real-life friends and like Khan, well-affiliated with “Fresh Off The Boat,” also play the co-leads. Recycling a tried-and-true recipe with a contemporary spin is certainly not a wrongdoing in itself—from haunted house movies to time travel flicks, various genres continuously source brand-new thrills and joys from familiar premises. But somewhere along the way here, the screenwriting trio foregoes building plausible dramatic turns, and instead, delivers something that dutifully ticks expected boxes. While they feel like the right boxes for the most part, “Always Be My Maybe” doesn’t ultimately offer sturdy emotional stakes to hold the film (and our attention) together. The plainly bright, sitcom-like cinematography, which lacks a visual identity throughout, doesn’t help matters, either.

And yet it all starts encouragingly enough, at a time when young Sasha Tran and Marcus Kim (with their adult selves played by Wong and Park respectively) are next-door neighbors in San Francisco. Often neglected by her parents who work long hours, Sasha seems accustomed to preparing her own dinners—she can make even a can of spam look fancy—and learning the intricate details of Korean cuisine from Marcus’ sweet, sacrificing mom. With Sasha spending most of her time with Marcus’ family, the two kids grow up as friends, somehow lose their virginity to each other as teens and upon the passing of Marcus’ mother, have an awkward falling out in their formative years.

Cut to 15 years later, and Sasha is now among America’s hottest celebrity chefs in Los Angeles, engaged to the equally successful restaurateur Brandon Choi (Daniel Dae Kim). But her nuptial bliss gets delayed, when she heads back to San Francisco to open a new restaurant and Brandon, on his way to India for a new business venture, proposes to postpone the wedding and have an open relationship along the way. You guessed it right. This is when Marcus—in A/C business with his father and still driving the same car—re-enters the picture, albeit with a quirky, comic relief of a girlfriend (the thankless part is spiritedly played by performance artist Vivian Bang). The two old friends re-connect, open up old wounds, fight, bicker, bond and ultimately, unite around their love for one another, lifting each other up professionally. Always wary about growth, Marcus finally finds the courage to step up his game as a musician. Thus far into fancy culinary trends—words like non-denominational and elevated are thrown around to describe food — Sasha remembers her roots and what made her love cooking in the first place.

These developments would certainly have felt more moving, if the duo’s break up were stemming from reasons more memorable or consequential. And … if only we could see Sasha at work more; even just once! But while Wong walks around with the earned attitude of someone deservingly successful at her job, “Always Be My Maybe” forgets to grant her adequate scenes where she gets to perform her craft to make her character plausible. The film poignantly engages with the Korean-American experience from familial, societal and professional angles and hits upon sweet, sharp-eyed insights in that regard. But its other ambitions—like critiquing gentrification—fall flat, with jokes around “kale” and “rich people in t-shirts” feeling immediately stale.

Wong and Park have lovely chemistry (more as friends than lovers), with Wong especially delivering a feisty performance while sporting Leesa Evans’ terrific costumes. But as tentative as its title, “Always Be My Maybe” feels very much like the fancy tasting menu Marcus complains about in one scene. It awakens a craving, but leaves you starving for something a lot more substantial. 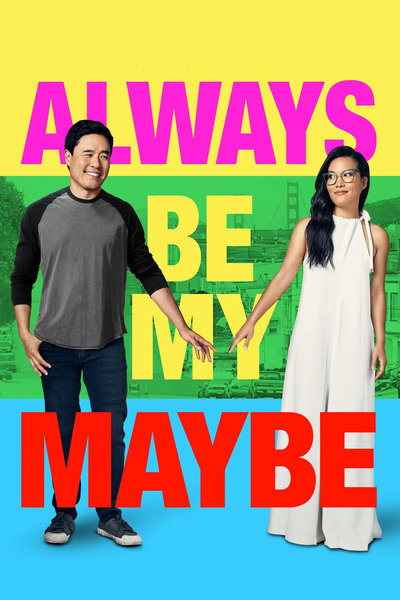