There has been a lot of discussion this year about bubbles, primarily in how they led to the election of Donald Trump, along with daily controversies on the echo chamber of social media. Documentary films have always been a conduit to allow people to break out of those bubbles, or at least see someone else’s bubble they call home. Perhaps it’s because I fell in love with Errol Morris’ work at a young age, but I’ve always loved “slice of life” documentaries with unique personalities in places I could never visit. It’s an incredible compliment to say that “Uncertain,” the great new documentary by Ewan McNicol and Anna Sandilands, reminds me of Morris’ “Vernon, Florida” and “Gates of Heaven,” those early works about people simultaneously very different and very similar to those you know. It’s a fantastic piece of observational filmmaking about a small town on the edge of Texas and three of the men who live there.

Uncertain, Texas is a place that a resident describes as “not on the way to anywhere. You either got to be lost or trying to find it.” If you were to stumble upon it, you could probably speak to most of its 94 residents in the span of a day. Just hang out at the centerpiece of town, a bait shop and tourist spot (I use that phrase lightly) on the edge of the gorgeous Caddo Lake, one of those wonderful Southern creations dotted by cypress trees and always humming with the sound of insect life. Caddo Lake is being overrun by a sort of algae that has impacted fishing and tourism, but the residents of Uncertain trudge forward, taking life day by day, as we all do.

McNicol and Sandilands focus on three Uncertain-ers, all of whom are interesting enough that they could easily anchor their own film. First, there’s Henry, the 74-year-old lake guide with a heart of gold and completely absent filter when it comes to showing the filmmakers his emotional self. He lost his wife of five decades just a few years ago. His kids don’t at all like his new girlfriend, a 40-something who they claim is just taking his money. I could hang on Henry’s boat all day, listening to him tell stories about his past and looking at his expressive face. But then I’d miss the unforgettable Wayne, an ex-con and recovering addict who devotes his life to hunting a wild hog named Mr. Ed (because he’s so big that his head looks horse-like) to give him the focus to avoid his demons. And I’d miss Zach, the youngest of the three men, and someone truly caught in the malaise of adult life in the middle of nowhere. His only friend is an Xbox 360, there’s no one in town to date, and he drinks enough to kill himself at a young age, mostly because there’s nothing else to do.

The three men in “Uncertain” are from different generations and have wildly different stories to tell, but they also all have notable hurdles to overcome in life, and at least Henry and Wayne feel like the slow pace of Uncertain keeps them in check to a certain degree. There’s a sense in the filmmaking here that trouble and danger are things that are always on the edge of the horizon, like the algae taking over the lake. We spend a little time with a biologist trying to fix the problem (with weevils, of all things) and he speaks of how it’s easy to fix the problem but it returns quickly without maintenance. The filmmakers don’t draw direct thematic lines from this to Henry’s melancholy and Wayne’s addiction, but it’s not hard to do so yourself. Like Morris’ best work, they let the characters speak for themselves, without judgment or mocking in the slightest, and the choices they make as filmmakers allow us to make connections between life in Uncertain and life where we are. There’s an art to capturing characters like these, forging bonds with them that allows them to reveal themselves in ways that make them uniquely unforgettable but also instantly relatable. My life bears almost no resemblance to Wayne’s, but I feel like I know him a bit after watching “Uncertain.” We could get a drink. Talk about his past and fatherhood. And, maybe, break the bubbles a little bit. 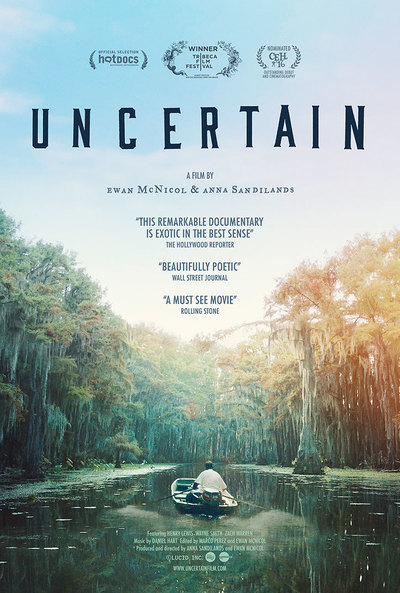