“Smallfoot” is an animated musical about … totalitarianism?

This may sound like a wildly contradictory concept. But the family-friendly film from director and co-writer Karey Kirkpatrick (“Over the Hedge”) and co-director Jason Reisig is surprising in its forward-thinking foundation. If only the dialogue and visuals matched the daring of its ideology.

Among the multiple screenwriters is the team of John Requa and Glenn Ficarra, who’ve shaken things up in the past most notably with the influential “Bad Santa.” “Smallfoot” urges kids to think for themselves. To question what they’ve been taught. To challenge authority. It takes place in a mountaintop society of yetis where the rules are literally etched in stone and must be followed for fear of banishment. “Smallfoot” could be viewed as a statement on the restrictive nature of government, religion or both. It’s a bold and exciting thematic choice for a film aimed at mainstream audiences of all ages.

Ah, but there’s the problem. “Smallfoot” IS aimed at mainstream audiences of all ages, meaning it must be palatable on a mass scale. And so the look of the film is blandly pleasing, and the antics have a familiar “Looney Tunes” squash-and-stretch aesthetic, and the songs are reminiscent of ones you’ve heard in previously successful animated movies. The opening sequence is pretty much a beat-for-beat recreation of the joyous “Everything Is Awesome” at the beginning of “The LEGO Movie” (although the song that accompanies it is not nearly as insanely catchy). Later, upbeat chase music throughout calls to mind the perky score of the “Despicable Me” movies.

Channing Tatum lends his voice to a sunny, furry beast named Migo, who’s essentially a yeti version of Chris Pratt’s LEGO construction worker, Emmet. He begins his day in a cheery way, being psyched about mundane stuff and joining his neighbors in a tune about how “we like living this way.” Migo’s dad, Dorgle (Danny DeVito), has the responsibility of starting each day for the village by summoning the giant, orange snail that travels across the sky; he does this by slingshotting himself through the air and hitting a gong with his head. (You may know this better as the sun rising.)

Everyone performs his or her job and stays in his or her place. Do as you’re told, blend in and always follow the stones: Those are among the chief guiding beliefs in this society. The leader of them all is the seemingly benevolent Stonekeeper (Common), who wears the rules as a massive vestment made of individually carved rocks. Any knowledge of the outside world comes in scattered and confusing pieces; a roll of toilet paper is mistaken as “The Scroll of Invisible Wisdom,” a ski pole is a horn and a down jacket is a pelt. It’s another rip-off of “The LEGO Movie”: taking everyday household items and making them seem mysterious.

But one day, when he wanders astray, Migo encounters a Smallfoot—a human who has crashed his plane and landed in the snow-capped mountains near the yetis’ home. Each has heard legends about the other; each is terrified of the other. One of the movie’s more consistently amusing bits is the distorted way each hears the other’s voice. The yeti comes off as gruff and growly when he’s really just trying to have a pleasant conversation; the human, by contrast, is squeaky and skittery when he’s trying to be calm and cool.

Meanwhile, down below in a town at the foot of the Himalayas, wildlife TV host Percy (James Corden) desperately tries to salvage his career by faking a confrontation with a yeti. But he doesn’t have to pretend for long when Migo shows up, following his newfound curiosity. From there, “Smallfoot” tracks the unlikely friendship between the two, and the ways in which it expands both characters’ understanding. (Unfortunately, this includes a wrong-headed, rap-karaoke version of Queen and David Bowie’s iconic “Under Pressure.”)

Also along to help expand Migo’s horizons is the Stonekeeper’s daughter, Meechee (Zendaya), a strong-willed, scientifically-minded young woman who’s secretly been daring to think for herself all along. And burgeoning actor/sometime basketball player LeBron James lends his voice to the character of Gwangi, a hulking, purple-hued beast with a heart of gold. But most of the characters have a shaggy sameness to them in drab shades of cream and blue, and they’re stuck saying variations of the same lines over and over.

But what’s exciting about “Smallfoot” is the way its characters increasingly push against what they’ve been told is true their whole lives—even if the lies were concocted to protect them. The Stonekeeper’s immediate reaction upon seeing a human with his own eyes is to deny, deny, deny. He refutes the scientific evidence that’s right in front of him. The Smallfoot is #FakeNews.

All of which makes this superficially sweet film so startlingly relevant. If only it had more panache in the execution—then everything truly would have been awesome. 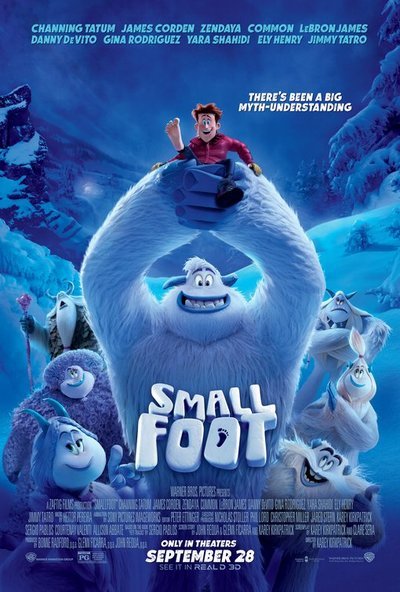 Rated PG for some action, rude humor, and thematic elements.

Writer (based on the book "Yeti Tracks" by)