One thing I’ve learned about Mabel "Madea" Earlene Simmons over the years is that she does not like people who, to quote the Ninth Commandment, bear false witness. So she should pull her trademark pistol out of her purse and bust a cap in Tyler Perry’s ass for “A Madea Homecoming.” Granted, the wound would be self-inflicted, but it would be in character. If you recall, Perry is on record saying “A Madea Family Funeral” would be the last we’d see of his most famous character. You may also recall the first line of my review of that film: “Tyler Perry must think I’m Boo Boo the fool; there’s no way I’m going to believe that “A Madea Family Funeral” is his signature character’s swan song.”

Boo Boo the Fool is here to tell you that I can’t blame Perry for taking all that Netflix money to walk back his statement. As the saying goes, don’t hate the player, hate the game. I can, however, blame the writer/director/producer/star for once again failing to engage with the more absurd ideas and meaner elements of humor he sprinkles throughout his screenplays. There’s always a frustrating level of imbalance in Perry’s films, where interesting throwaway jokes and concepts get short shrift while the tired, constantly repeated tropes are leaned on for what feels like an eternity. And he is addicted to pushing the two-hour runtime mark when he should get everything accomplished in a lean 80 minutes.

There is one thing here that’s new. While Perry has dabbled in the world of R-rated cinema before, “A Madea Homecoming” is the first of the Madea movies to earn that rating. Or rather, it earns the TV-MA rating. Netflix missed a huge opportunity to throw up a warning that said it was rated TV-MA-DEA, but they do tell us that the rating is for language. “Finally!” I said, “Madea’s gonna say the F-word!” Sure enough, before the opening credits are over, she says “this motherf---er is actually on fire!” The MFer in question is recurring character Mr. Brown (David Mann), who mimics Eddie Murphy’s uncle Gus in “Delirious” by setting himself ablaze after squirting numerous bottles of lighter fluid (and some gasoline) on the barbecue grill.

Mr. Brown is setting up the barbecue to honor Madea’s great-grandson, Tim (Brandon Black), who is graduating at the top of his university class. He’s coming home with Davi (Isha Blaaker), his biracial roommate. We first meet them in their car. Davi ominously alludes to a big secret Tim needs to tell his family. As soon as resident troublemaker Uncle Joe (Tyler Perry) sees them sitting on the couch next to each other, he makes a snide comment about what that secret might be. “Your Uncle Peaches had a roommate for 40 years,” he says. Meanwhile, our resident horny old lady, Aunt Bam (Cassi Davis), flirts with the astonishingly beautiful Davi, offering him things that can only be said in a TV-MA rated movie. “It won’t do you no good,” says Joe.

Tim’s mother, Laura (Gabrielle Dennis), grandmother Cora (Tamela J. Mann) and aunt Ellie (Candace Maxwell) are on hand, as is Laura’s best friend, Sylvia (Geneva Maccarone). Sylvia’s a divorce lawyer who handled Laura’s divorce from trifling husband, Michael (Amani Atkinson). When Ellie shows up wearing her police uniform, Uncle Joe flips out. This leads to several stilted lines of dialogue about whether the cops are good or bad. One such discussion takes place during a dinner scene that is essentially a ten minute commercial for Red Lobster. Perry gives their entrees more close-ups than he gives his actors. The food looks as hard to swallow as this movie’s plot.

As if there weren’t enough characters, “A Madea Homecoming” introduces Davi’s Irish aunts Cathy (Jennifer Gibney) and Agnes Brown (Brendan O'Carroll). Mr. Brown is amused that Agnes has a last name in common with him. Agnes also has something in common with Madea: they’re both played by men in drag. In fact, Agnes Brown is the main character of a long-running BBC series called “Mrs. Brown’s Boys.” Since every other word out of Agnes’ mouth begins with F, her show is also rated TV-MA. I don’t know how popular Madea is across the pond, but this film hints that a potential crossover movie is in the works.

Since every Madea movie has some form of intense soap opera drama for it to shift to without warning, I expected Tim and Davi’s relationship to be its source. Turns out that’s not the case at all. Sure, Tim’s gay, but Davi is not his man. Tim’s coming out is handled quite nonchalantly for a director with prior issues depicting homosexuals. On the other hand, the real drama is so hilariously convoluted and soapy that I must begrudgingly give Perry his props. It’s not as insane as the secret-revealing dinner table scene in “Why Did I Get Married?” but it’s a close second. There’s bad lawyering, a botched marriage proposal, a fight between romantic rivals, an Irish farm with erectile dysfunction-having bulls, and more than one person is sleeping with somebody they probably should not be screwing. It’s a hot mess, as usual.

The best part of this movie is the closing credits. No, I’m not being snarky here. There’s something going on during the closing credits—the homecoming they put in the title. It stars Madea as Beyoncé, dressed in long hair and shorts, backed by the Morehouse Marching Band. And it is hilarious. Perry’s plays have musical numbers he edits out when they become movies, so it was a lot of fun to see clips of him singing and dancing as Madea. She’ll make you forget the original version of “Drunk In Love” while simultaneously allowing you to bask in just how absurd the entire enterprise is.

Had Perry just made an entire movie of this concert, while also keeping the bonkers black and white flashback sequence that pits Madea against romantic rival Rosa Parks (yes, that Rosa Parks), “A Madea Homecoming” might have been a good movie. The prior end to this series, “A Madea Family Funeral,” was actually a decent movie. Madea should have quit while she was ahead. 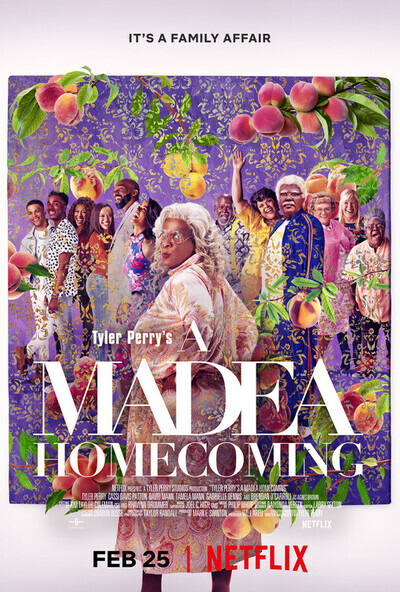